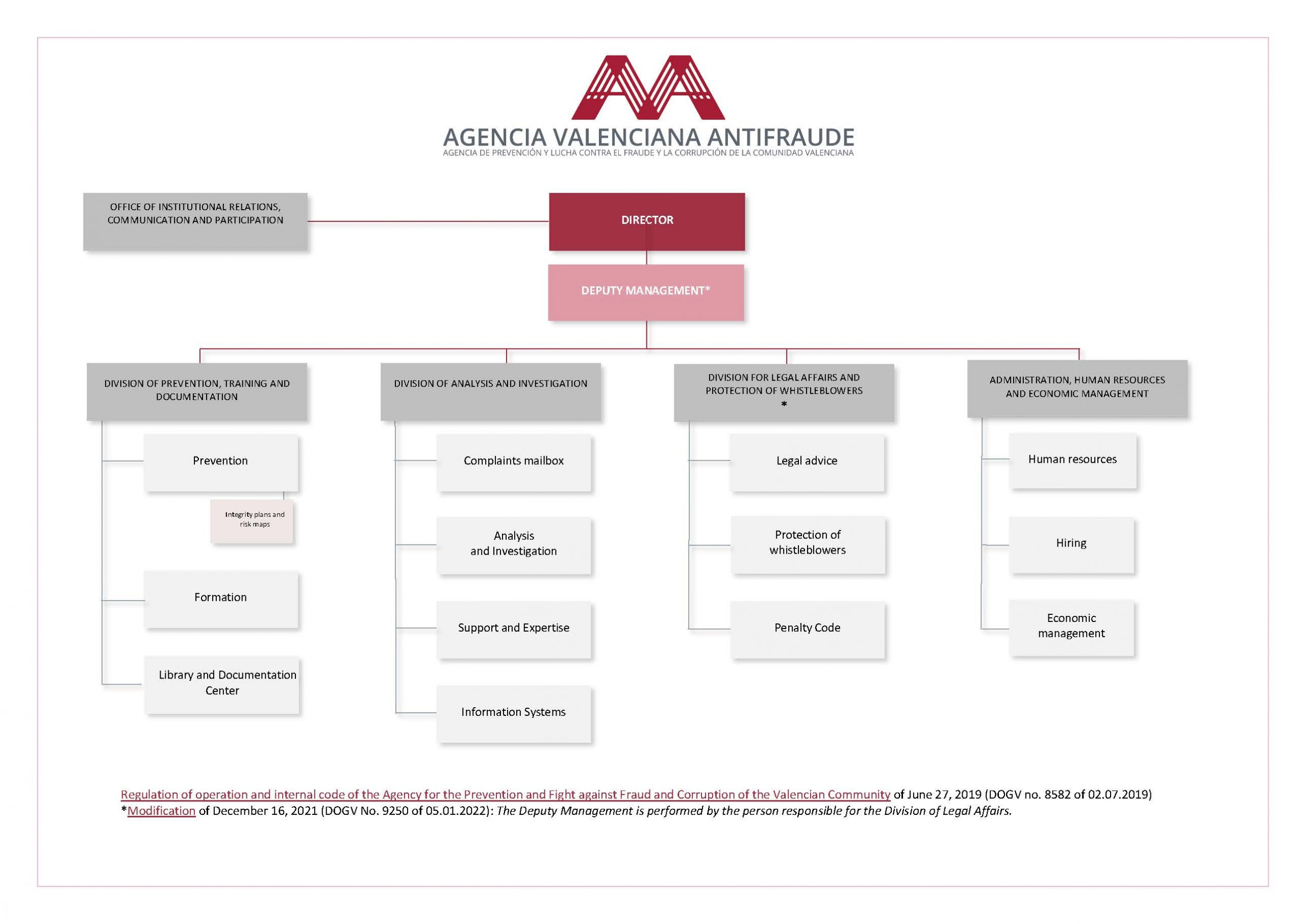 Created by Ley 11/2016, de 28 de noviembre, de la Generalitat, modified by Ley 27/2018, de 27 de diciembre, de medidas fiscales, de gestión administrativa y financiera y de organización de la Generalitat, the General Management of the The Agency for the Prevention and Fight against Fraud and Corruption is organized, for the fulfillment of its functions, in the following administrative units.

The person who holds the direction of the Agency directs it and holds its institutional and legal representation, exercising the position with full independence, immobility and objectivity, and always acts in full compliance with the law and the right.

The personal status of the director of the Agency is that established in article 26 of Law 11/2016, of November 28, of the Generalitat, of the Agency for the Prevention and Fight against Fraud and Corruption of the Valencian Community .

The head of the Agency has the status of public authority and is assimilated to a senior position with the rank of director general.

The mandate of the director is seven years from the date of his election by Les Corts and is not renewable.

It is chosen by Les Corts from among citizens of legal age who enjoy full use of their civil and political rights and who meet the conditions of suitability, probity and professionalism necessary to exercise the position. They must be in possession of a higher university degree that is suitable for the assigned functions and must have more than ten years of work or professional activity related to the functional scope of the Agency. In addition, it must have an administrative neighborhood in the Valencian Community.

The candidates for this position are proposed to Les Corts by social organizations that work against fraud and corruption in the Valencian Community and by parliamentary groups, having presented a shortlist of candidates for the position.

Candidates must appear before the corresponding Parliamentary Commission within the framework of a public call for this purpose, to be evaluated in relation to the conditions required for the position. The agreement reached in this Commission is transferred to the Plenary of Les Corts, which is responsible for voting by a three-fifths majority.

After his election, the director or director is appointed by the person who holds the Presidency of Les Corts and takes possession of the position within a period of one month from the date of publication of his appointment in the Official Gazette of the Generalitat Valenciana.

The condition of director of the Agency is incompatible with:

a) Any representative position.

b) The condition of member of the Constitutional Court, Síndic de Greuges, Sindicatura de Comptes, Consell Valencià de Cultura, Acadèmia Valenciana de la Llengua, Comitè Econòmic i Social, Consell Jurídic Consultiu or of any position designated by Les Corts, by the Congress of Deputies or by the Senate.

c) Any political position or administrative function of the State, of the autonomous communities, of the local entities and of the entities that are linked to them or that depend on them, and also of the international community organizations or institutions.

d) The exercise of any professional, commercial or labor activity.

e) The active exercise of judicial and fiscal careers.

f) Any managerial or advisory position in associations, foundations and other non-profit entities.

g) Membership of any political party, trade union or professional or business association.

In addition, the incompatibility regime established by the legislation applicable to senior officials is applicable.

The director or director of the Agency ceases for any of the following reasons:

b) Extinction of the mandate due to its end.

e) Disqualification for the exercise of political rights declared by a final judicial decision.

f) Imputation with adoption of precautionary measures, opening of oral proceedings or conviction by final judgment for the commission of a crime.

g) Notorious and serious negligence in the fulfillment of the obligations and duties of the position.

h) Loss of the administrative neighborhood of the Valencian Community.

In addition to directing and holding its institutional and legal representation, the functions of the person who holds the direction of the Agency are the following:

a) Prepare and present to the Corts the draft regulations for the operation and internal regime of the Agency for subsequent approval by the Agency.

b) Direct, plan, coordinate and supervise the performance of the functional directorates in which the Agency is organized, the Institutional Relations, Communication and Participation office and the Administration, Human Resources and Economic Management area.

c) Control and evaluate the actions carried out by the Agency

d) Exercise the leadership of the personnel at the service of the Agency, summon and resolve the procedures for the provision of jobs, make appointments and dismissals, fill positions provisionally in accordance with the procedures provided by law, grant authorizations where appropriate of compatibility and resolve causes of abstention or objection, as well as any other competence in this matter related to the proper functioning of the entity.

e) Exercise the governing, organizational, inspection and disciplinary powers regarding the Agency staff.

f) Approve the list of jobs of the Agency.

g) Exercise the powers of analysis and investigation or inspection.

h) Grant the personal status of protected whistleblower and agree on the measures that, in each case, proceed to guarantee their indemnity.

i) Exercise the competence to impose the sanctions established by Law 11/2016, of November 28, of the Generalitat.

j) Propose the initiation of disciplinary or sanctioning procedures when the competence corresponds to another body.

k) Refer, when appropriate, the proceedings to the Public Prosecutor’s Office or to the judicial authority, or to the Court of Accounts.

l) Issue reports, opinions, proposals, recommendations and reasoned expositions, within the scope of the Agency.

m) Issue resolutions and agreements, issue communications and requests, and make requests and reminders, in accordance with the nature and scope of the act.

p) Prepare and approve the budget project and its modifications for the operation of the Agency, and send it to the Table of the Corts so that it can be integrated with due independence in the Generalitat budget project, as well as establish guidelines and procedures for their implementation.

r) Approve the settlement of the budget and the annual account.

s) Issue circulars, instructions or service orders addressed to the official staff of the Agency. Establish the criteria in relation to information systems and technologies, their monitoring and development.

t) Approve the Agency’s annual report and send it to the Corts. To render accounts of the activity and management of the Agency before the competent parliamentary Commission.

u) Prepare and present special or extraordinary reports before the corresponding parliamentary commission or before the Permanent Council of the Corts, ex officio or at the request of the Corts or the Consell.

v) Prepare non-binding recommendations and opinions on matters related to fraud and corruption at the request of the parliamentary committees.

x) To resolve administratively the appeals that are filed against the Agency’s resolutions.

z) To render accounts of their management before the Participation Council of the Agency and the citizens.

aa) Any other functions attributed to him by the laws and these regulations, as well as those inherent to his condition as legal and institutional representative of the Agency, and all those that have an executive nature within his scope of competences.

Under the direct dependence of the head of the General Directorate of the Agency, the following functions correspond to the administrative unit called Cabinet of Institutional Relations, Participation and Communication:

a) Maintain, promote and manage institutional relations with the bodies and institutions of the Generalitat, the State and the other public administrations.

b) Develop the external communication policies and institutional image of the Agency, and the informative relations and with the media.

c) Propose any action of the Agency based on reports, statistics, publications and technical studies in relation to the functions of the Agency.

e) Prepare and coordinate the meetings of the Agency’s Participation Council, as well as promote meeting and exchange spaces with civil society and collect their contributions.

g) Ensure compliance with the obligations relating to the transparency of the Agency’s public activity and the active publicity of information.

h) Carry out the design proposal for the Agency’s website, as well as supervising its information and contents and the presentation thereof.

i) To monitor, evaluate the development and degree of compliance with current regulations on equality between women and men in the scope of the Agency’s actions, including the use of non-sexist and non-discriminatory language and the transmission of positive and egalitarian values ​​in institutional advertising; propose gender policies, the equality plan and the Agency’s protocol on workplace and gender harassment.

j) Those others assigned by the Director of the Agency.

CONFERENCE “PUBLIC INTEGRITY AND RISKS IN PUBLIC MANAGEMENT” IN ALICANTE