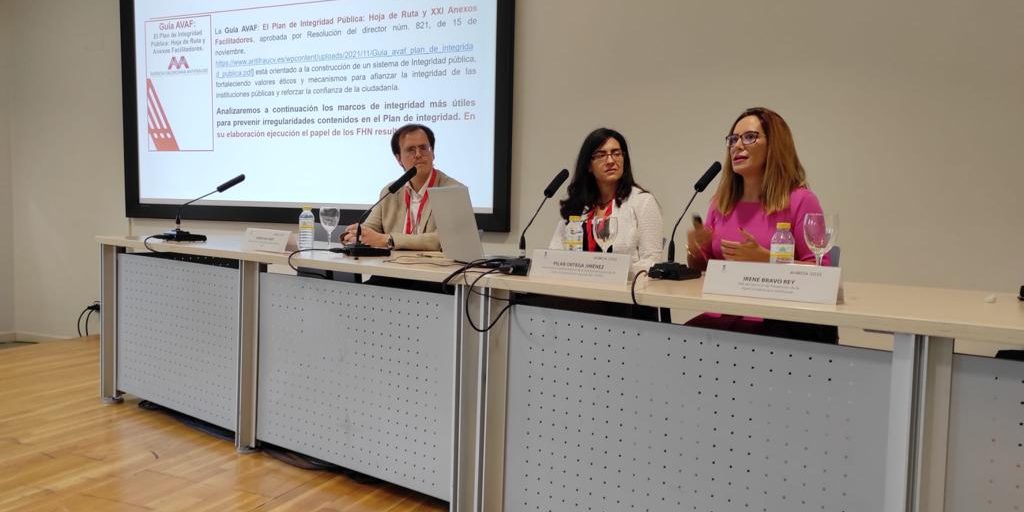 The Valencian Anti-Fraud Agency participated, on June 16, in the XIII biennial Congress organized by the General Council of Official Associations of Secretaries, Auditors and Treasurers of the Local Administration (COSITAL) under the title “NATIONAL AUTHORIZATION, FOUNDATION OF THE STATE OF LAW IN THE LOCAL ADMINISTRATION” in Murcia, on June 16 to 19, 2022.

The purpose of holding this Congress was to highlight the importance of the role played by the National Authorities to guarantee the rule of law.

The event was attended by certain presidents of the Territorial Associations of Secretaries, Controllers and Treasurers, representatives of various administrations and national and international public institutions (the IGAE, the Valencian Anti-Fraud Agency…) and professional experts from universities. Authorities from the Murcia region and the Ministry also attended the meeting.

The representative of the Valencian Anti-Fraud Agency, Irene Bravo Rey, head of the Prevention Service, participated as a speaker in WORKSHOP 3: “The role of secretaries, auditors and treasurers in the management of Next Generation European Funds.” coordinated by Pilar Ortega Jiménez, Second Vice President of COSITAL together with Javier Font Miret, from Division III of the National Audit Office. IGAE. The participation of the Head of the Prevention Service, Irene Bravo Rey, focused, with her own preparation of the training material, on “The role of those enabled: Towards institutional integrity.” He proceeded, during his presentation, to explain the role played by the Valencian Anti-Fraud Agency, the requirements of the Anti-Fraud Measures Plans (PMA) as a result of Order 1030/2021, of September 29, and the integrity approach required by both international, European, national and regional regulations and the key role played by national authorities in the preparation and implementation of the institutional public integrity strategy. He highlighted the various materials produced by the Agency in this area: The AVAF Guide; recommendations on planning, unjust enrichment and conflict of interest; the risk catalogs and the visual didactic manual, for the purposes of their great usefulness and as support material and help in the implementation of an integrity strategy by national authorities, in their respective institutions, as guarantors of the rule of law, breaking down the functions to be performed by these professionals in each of the phases that make up the establishment of an institutional integrity policy.