In 2020, 226 complaints were submitted to the Valencian Anti-Fraud Agency

In 2020, 226 complaints were submitted to the Valencian Anti-Fraud Agency 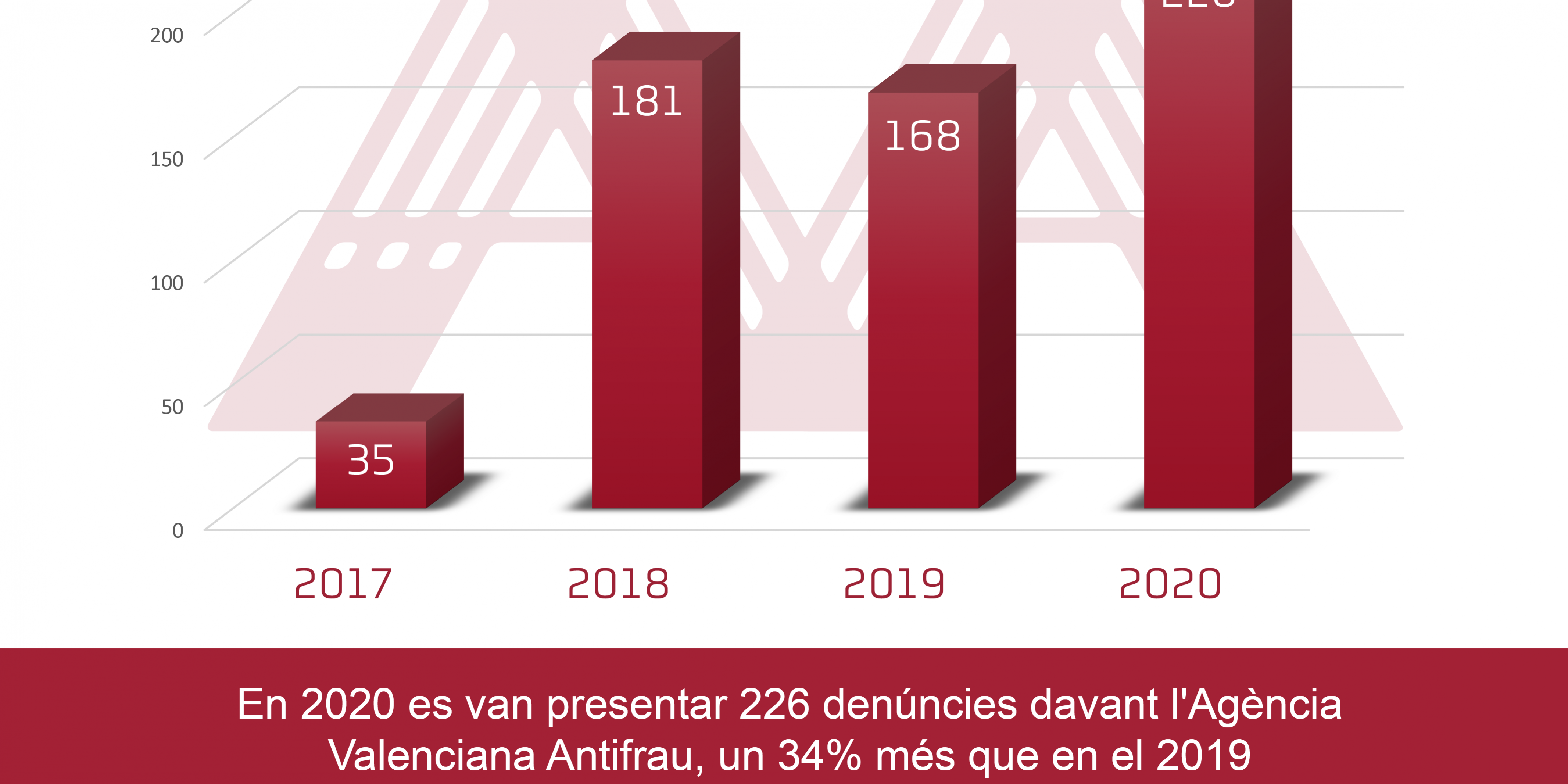 Valencia, February 23, 2021.– The Valencian Anti-Fraud Agency is finishing preparing the corresponding Activity Report in 2020 which it will have to deliver to the Valencian Courts before March 31, as set out in its regulations.
Among the first data that have been extracted from the analysis of the work carried out are those corresponding to the number of complaints filed with the * AVAF, which in 2020 has achieved the figure of 226. In 2019, 168 complaints were filed by the The number of complaints filed has increased by 34% despite the complicated situation registered by the COVID-19 crisis.
Other data collected is the location of the public administration object of the complaint and thus we see that of the total complaints filed 115 of them are against public administrations located in the province of Valencia, which represents 51%. In the province of Alicante there have been 70 complaints (31%) and 15 in the province of Castelló (7%). The remaining 26 complaints (12%) correspond to the Generalitat Valenciana and dependent entities, the scope of which encompasses the entire Valencian Community.
Regarding the channel used to file complaints, of the 226 filed, 191 have been made through the complaints mailbox, that is, 85%. The Agency’s complaints box has become the main complaint tool, especially because it allows the possibility of submitting the complaint anonymously.
Since its launch in 2018, the number of complaints filed through the mailbox has been increasing progressively and thus in the first year of operation (2018) it was used in 54% of cases to go to 76% in 2019 and finally in 2020 to achieve the figure of 85%.
The director of the Agency, Joan Llinares, has declared that “this significant increase in the number of complaints filed is the confirmation that more and more people are aware of the existence of a body that fights against fraud and corruption in our Community”.
“Likewise, the work carried out in the Agency with the investigation of the cases will be reinforced when it is the citizens who resort to the * AVAF and have knowledge of situations that may constitute fraud and corruption, for which reason they have the trust of the public is our greatest recognition ”, added Llinares.