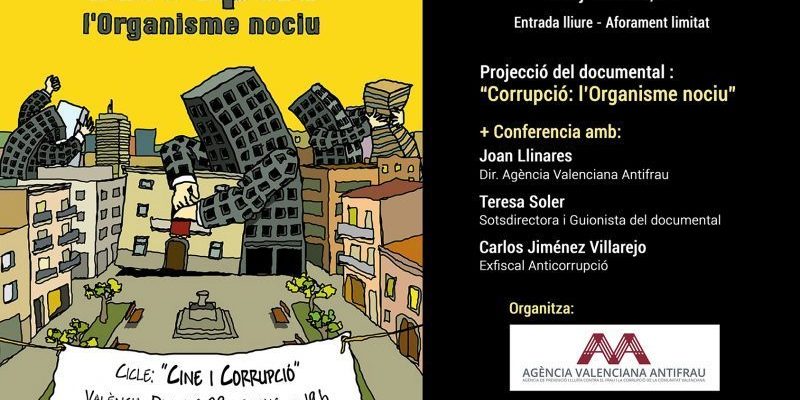 After the events of April 24 in Castellón and April 25 in Alicante, the “Documentary Cinema and Corruption” Cycle continues in Valencia. On May 28, within the set of activities that the Valencian Antifraud Agency has been carrying out as part of its functions of preventing corruption and disseminating the culture of ethics, the documentary “Corrupció: l’Organisme Nociu” by Pandora will be screened Box TV followed by a discussion between the director of the Valencian Anti-Fraud Agency, Joan A. Llinares, the co-director of the documentary, Teresa Soler, and the former anti-corruption prosecutor Carlos Jiménez Villajero (Valencia). Admission is free although it will be limited to the capacity of the rooms.

The documentary “Corruption: The Harmful Organism” analyzes “local” corruption and gives a voice to victims who have dared to report it. It is an exciting close and emotional story of people who lived and denounced corruption. Exemplary behaviors that, together with an intense argument from recognized experts in the field, offers a powerful tool with useful and effective information to deal with this scourge from the system itself and from citizen involvement.

Due to its high educational and informative content, this documentary has been selected by the Valencian Antifrau Agency because it understands that it aligns with the institution’s own objectives.