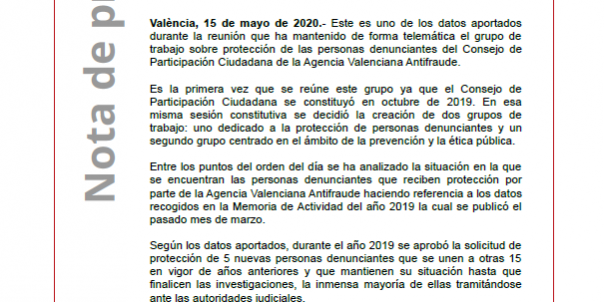 Valencia, May 15, 2020.– This is one of the data provided during the meeting held electronically by the working group on the protection of complainants of the Citizen Participation Council of the Valencian Anti-Fraud Agency.

It is the first time that this group has met since the Council for Citizen Participation was established in October 2019. In that same constitutive session, it was decided to create two working groups: one dedicated to the protection of complainants and a second group focused on the field of prevention and public ethics.

Among the items on the agenda, the situation of the complainants who receive protection from the Valencian Anti-Fraud Agency has been analyzed, referring to the data collected in the Activity Report for 2019, which was published last month of March.

According to the data provided, during the year 2019 the request for protection of 5 new complainants was approved, who join 15 others in force from previous years and who maintain their situation until the investigations are completed, the vast majority of them being processed before the judicial authorities.

As a general rule, these whistleblowers who report or warn of facts and behaviors that may constitute fraud or corruption receive reprisals as a result of the complaint, in the form of pressure, threats, workplace harassment, demotion or even dismissal. The Valencian Antifraud Agency provides them with legal advice and ensures that these acts of intimidation, direct or indirect, do not occur.

Another issue discussed during the meeting was the need to transpose Directive 2019/1937 of the European Union on the protection of those who report violations of European Union law. This directive came into force in December 2019 and Spain has two years to transpose it into its legal system.

The importance of this directive resides in the fact that with this regulation protection and legal advice will be given for the first time in our country, among other issues, to those persons who report crimes of fraud, corruption, tax evasion or damage to the environment.

Among the members of the working group is the Spanish Association of Obliged Subjects in the Prevention of Money Laundering (ASEBLANC); Transparency International Spain; Union of Technicians of the Ministry of Finance (GESTHA); Association of Alerters against Corruption (AcC); Foundation for Justice and the International Baltasar Garzón Foundation (FIBGAR).

The Council of Citizen Participation was created by Resolution of February 12, 2019 and is regulated in Title IV of the Regulation of operation and internal regime of the Valencian Anti-Fraud Agency of June 27, 2019.

Links to the 2019 Activity Report and the Press Release

For more information you can reach gabinete@antifraucv.es or phone 962 787 450