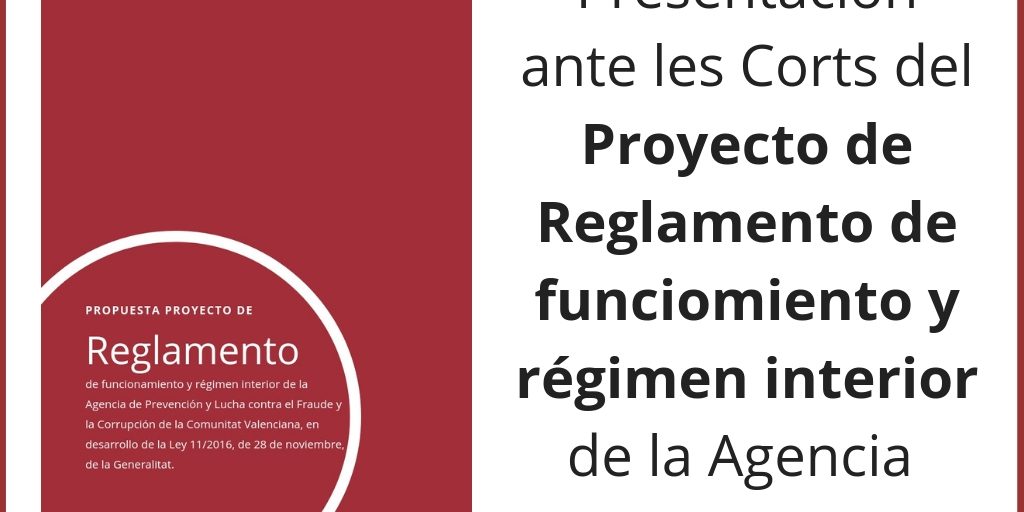 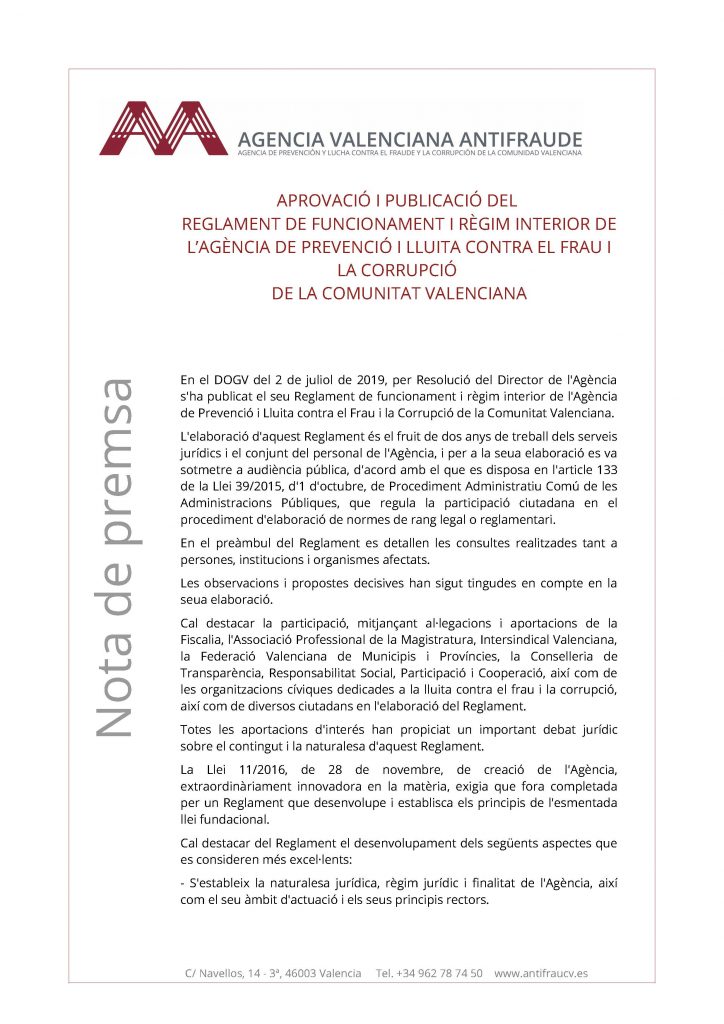 In the DOGV of July 2, 2019, by Resolution of the Director of the Agency has published its Operating Regulations and internal regime of the Agency for the Prevention and Fight against Fraud and Corruption of the Valencian Community.

The preparation of this Regulation is the result of two years of work by the legal services and the Agency’s staff as a whole, and for its preparation it was submitted to a public hearing, in accordance with the provisions of Article 133 of Law 39 / 2015, of October 1, of the Common Administrative Procedure of Public Administrations, which regulates citizen participation in the procedure for the elaboration of norms of legal or regulatory rank.

In the preamble of the Regulation, the consultations made to affected persons, institutions and organizations are detailed.

The decisive observations and proposals have been taken into account in its preparation.

It is worth highlighting the participation, through allegations and contributions from the Prosecutor’s Office, the Professional Association of the Magistracy, the Valencian Inter-Union Association, the Valencian Federation of Municipalities and Provinces, the Ministry of Transparency, Social Responsibility, Participation and Cooperation, as well as dedicated civic organizations to the fight against fraud and corruption, as well as to various citizens in the elaboration of the Regulation.

All the contributions of interest have led to an important legal debate on the content and nature of these Regulations.

Law 11/2016, of November 28, creating the Agency, extraordinarily innovative in the matter, required that it be completed by a Regulation that develops and establishes the principles of the aforementioned founding law.

The Regulation should highlight the development of the following aspects that are considered most outstanding:

– The legal nature, legal regime and purpose of the Agency are established, as well as its scope of action and its guiding principles.

– The approval of a code of ethics and conduct and an ethics committee is foreseen for all its personnel.

– Its organizational structure is established by creating the Management Committee, a collegiate body that assists in the management of the Agency and, in the event of a conflict of interest, replaces it.

– They carry out their training, prevention and documentation actions. These functions are one of the pillars of the Agency’s functions. The Entity should be conceived both as an element of investigation and the fight against fraud and corruption, as a tool for prevention and training.

– The analysis and investigation procedure is regulated, with all the necessary guarantees.

– The sanctioning procedure and its principles are established, as well as the procedure for its resolution.

– The Regulation develops the economic and budgetary regime established in its creation law and its patrimonial and contracting regime.

– The Regulation establishes a system of accountability and transparency of the public activity of the Agency. One of its fundamental tools is the Transparency Portal on its website.

– The right to public information is also regulated for any citizen, both individually or on behalf of any legally constituted organization.

– Regulates the complaints box, which is a secure telematic channel for presentation, as well as information or communications, even when the information received is anonymous. It also operates as a virtual office of the public employee to allow him to confidentially communicate administrative irregularities of which he may have knowledge in the exercise of his functions.

-All data processed by the Agency are subject to current data protection regulations.

In conclusion, it can be stated that with the approval of this Regulation, the legal architecture necessary for the Valencian Anti-Fraud Agency to have the regulatory tools that allow this Entity to carry out its functions is completed.

Meeting with the president of the Provincial Council of Valencia

II Workshop on Transparency and Good Governance at Jaime I University