Processsing of the European Directive on the protection of whistleblowers

Processsing of the European Directive on the protection of whistleblowers 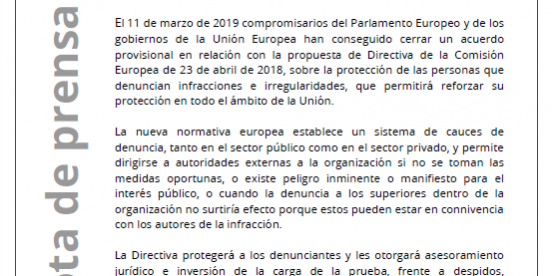 Provisional agreement of the Parliament and the European Council for the approval of the Directive of the European Union, on the protection of persons reporting offenses throughout the Union

On March 11, 2019 compromisers of the European Parliament and the governments of the European Union have managed to close a provisional agreement in relation to the proposal for a Directive of the European Commission of April 23, 2018, on the protection of people who report offenses and irregularities, which will make it possible to reinforce their protection throughout the Union.

The new European regulation establishes a system of reporting channels, both in the public and private sectors, and allows addressing authorities external to the organization if the appropriate measures are not taken, or there is an imminent or manifest danger to the public interest , or when the complaint to superiors within the organization would not take effect because they may be in collusion with the perpetrators of the offense.

The Directive will protect whistleblowers and provide them with legal advice and reversal of the burden of proof, against dismissal, demotion and other forms of retaliation, and also in legal proceedings, as a result of complaints of fraud, corruption, tax evasion or damages. to the health of people and the environment. In addition, it provides for the imposition of fines on retaliators, and requires Member States to inform citizens about the complaint procedures and the type of protection they can avail of, having to designate a public authority responsible in this area.

Shortly, the European Parliament and the Council will formally approve this agreement, so it is expected that the application of the Directive will be enforceable in all Member States in 2021.