Screening of the documentary: “”Corruption: the harmful organism””

Screening of the documentary: “”Corruption: the harmful organism”” 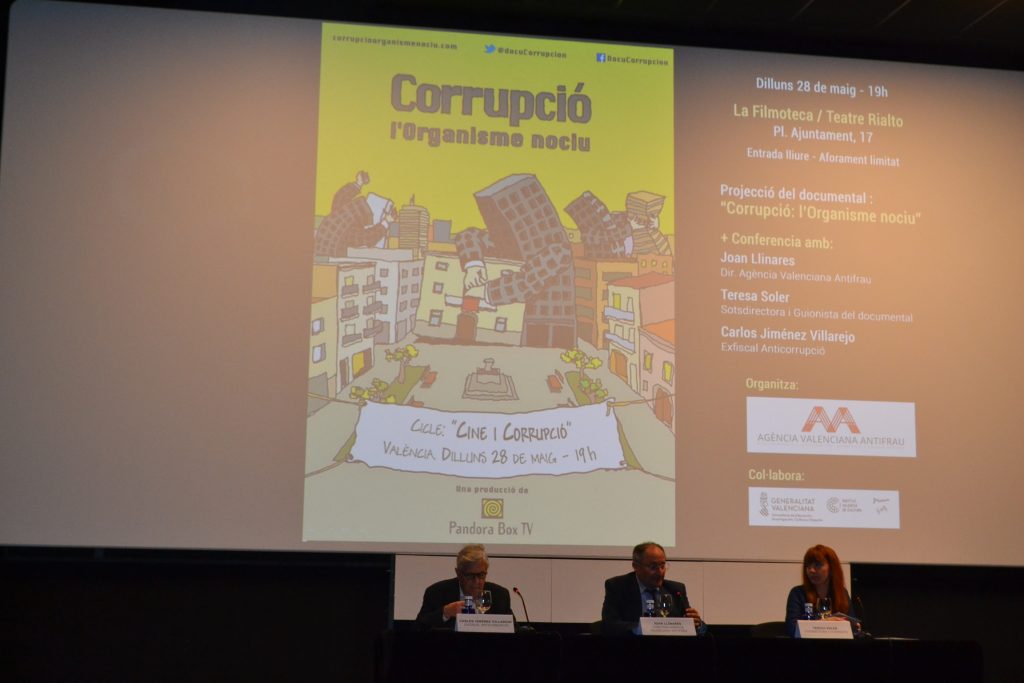 On May 28, the documentary “Corrupció: l’organisme nociu” was screened in the film library of the Generalitat Valenciana, with a large influx of public and representatives of civil society, the magistracy, the prosecution service and various institutional representatives.

After the presentation made by Mr. Joan Llinares, director of the Valencian Anti-Fraud Agency, once the screening was over, the representative of the documentary producer, Ms. Teresa Soler, and, finally, the former Chief Anti-Corruption Prosecutor took the floor. Mr. Carlos Jiménez Villarejo who for more than 30 minutes made a presentation on the serious problem of corruption in Spain.

SESSION OF THE 1ST EDITION OF THE INTERUNIVERSITY COURSE “PREVENTION OF CORRUPTION RISKS IN PUBLIC MANAGEMENT”. UNIVERSITY OF ALICANTE

COURSE “THE CHALLENGES OF THE IMPLEMENTATION OF THE SDG IN THE LOCAL ADMINISTRATION. FOR A NEW SUSTAINABLE AND CREATIVE GOVERNANCE”.

AVAF PARTICIPATION IN THE FGE COURSE “CRIMES AGAINST PUBLIC ADMINISTRATIONS”.

Round table “Protection of whistleblowers: a new tool to fight corruption”

DOCUFÒRUM: “CORRUPCIÓ, ORGANISME NOCIU”, AND “CONFLICT OF INTEREST” AT THE UV

Intervention at the IX National Congress of Territorial Comptrollers of Colombia

DOCUFORUM: CORRUPTION HARMFUL ORGANISM AT THE UNIVERSITY OF VALÈNCIA.

AVAF participation in the course “Recovery, transformation and resilience plan in the new policies of support to employment” of the Aragonese Institute of Employment (INAEM)

DOCUFORUM: CONFLICT OF INTEREST, AT THE UNIVERSITAT JAUME I DE CASTELLÓ.

Appearance of the Director of the Agency in the Group of experts of the European Commission (E03709) on Directive (EU) 2019/1937 in Brussels.