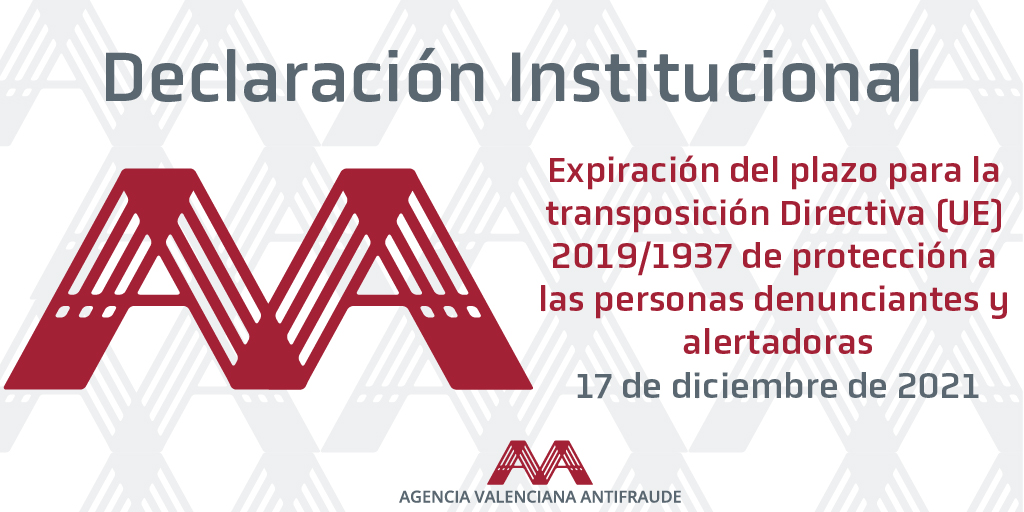 València, December 17, 2021.- Today, December 17, the deadline for the transposition into the Spanish legal system of European Directive 1937/2019, for the protection of people who report violations of Union Law, better known as Directive Whistleblower.
The Government of Spain, through the Ministry of Justice, is in charge of the transposition work and had two years to adapt the content of the European Directive to Spanish law.
For this reason, the Valencian Antifraud Agency has issued an institutional statement with which it wants to warn of the breach of that deadline and the repercussions it has on having lost the opportunity to carry out a reform of the Spanish legal system that would allow fighting corruption in a more effective.
The Agency recalls that from this moment the Directive has direct effects and the courts and tribunals must make an interpretation in accordance with it and reiterates the need for the transposition to be carried out for what it offers its collaboration to the Ministry of Justice.
It also urges the creation of a national authority for the prevention and fight against corruption that works in coordination with the regional authorities and the modification of the legal system with special reference to criminal law and the protection of witnesses and experts.
It is also necessary to establish secure and confidential reporting channels that allow even anonymous reports, so that anyone can report possible crimes and actions constituting fraud and corruption.
The Institutional Declaration issued by the Agency makes a special mention of the recognition deserved by persons who report corruption, who must be effectively protected against possible reprisals, as well as recognizing their exemplary nature.