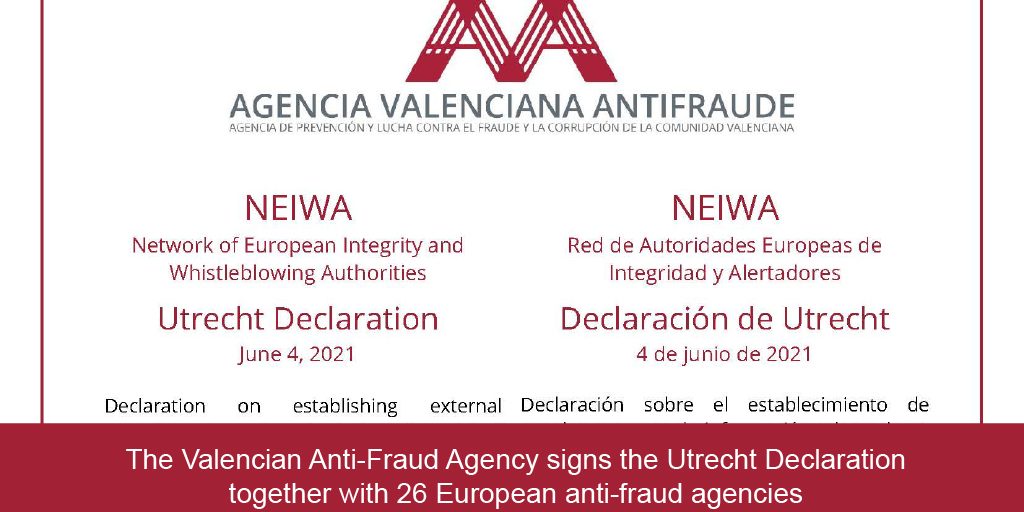 València, July 21, 2021.- The Valencian Anti-Fraud Agency is one of the signatory authorities of the Utrecht Declaration, which has been agreed upon after the work carried out within the Network of European Authorities for Integrity and Reporting Irregularities (NEIWA Network ) of which 26 public authorities representing 22 European States are part.
With the Utrecht Declaration, the Neiwa Network urges the Member States to put into operation the necessary tools for the protection of those who report fraud and corruption, bearing in mind that the two-year deadline for transposition into the National legal systems of European Directive 1937/2019 on the protection of persons who report infringements of Union law.
The Utrecht Declaration is the result of the work carried out during the last six months by the NEIWA Network, of which the Valencian Anti-Fraud Agency is a part, which represents the Spanish State together with the Calalunya Anti-Fraud Office, as it does not exist in Spain. a national anti-fraud and corruption authority.
This Declaration reinforces the work of anti-fraud agencies by guaranteeing external reporting channels in which the confidentiality of the reporting persons must be respected, as well as the content of the events reported and the investigations through effective procedures and without leaks that prevent its good end. Confidentiality is essential in a reporting system that offers guarantees.
This Declaration also recommends that Member States ensure the protection of anti-fraud agencies and offices by providing them with the necessary resources to be able to carry out their functions, while safeguarding their independence and autonomy.