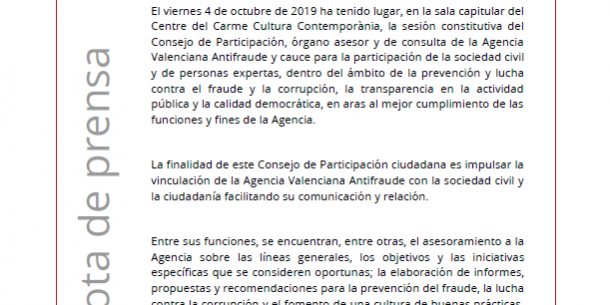 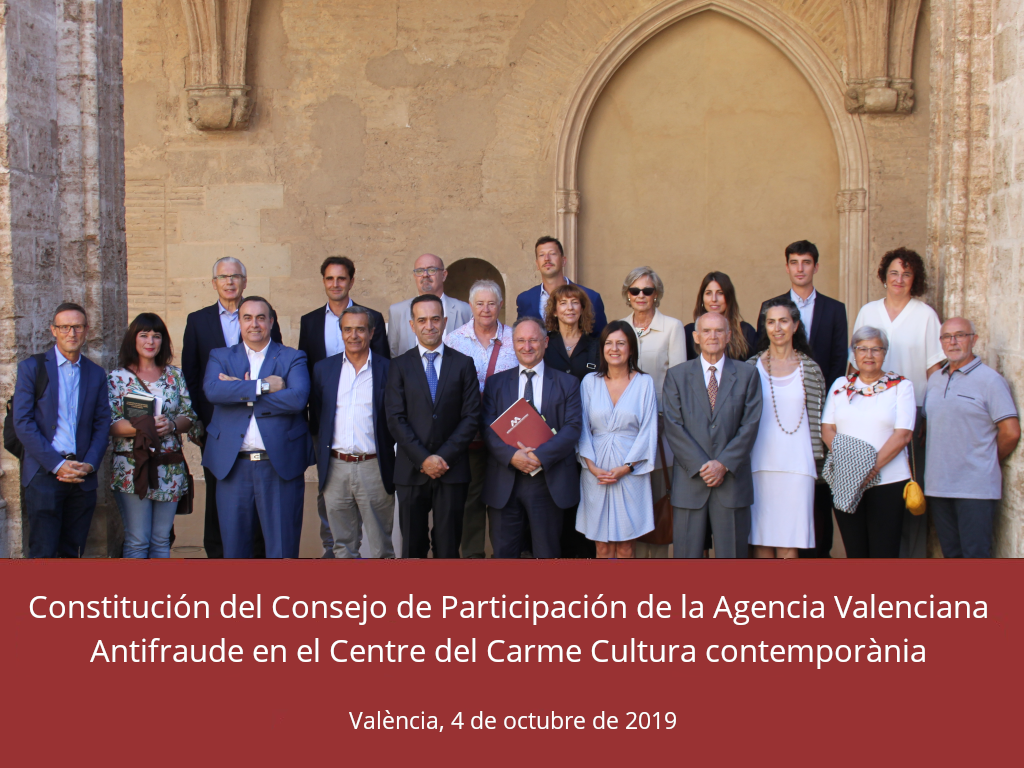 On Friday, October 4, 2019, the constitutive session of the Participation Council, advisory and consultation body of the Valencian Anti-Fraud Agency and channel for the participation of civil society and of experts, within the field of prevention and fight against fraud and corruption, transparency in public activity and democratic quality, in order to better fulfill the functions and purposes of the Agency.

On Friday, October 4, 2019, the constitutive session of the Participation Council took place in the chapter room of the Center del Carme Cultura Contemporània,

advisory and consultative body of the Valencian Agency Antifraud and channel for the participation of civil society and experts, within the field of prevention and fight against fraud and corruption, transparency in public activity and democratic quality, in order to better fulfill the functions and purposes of the Agency.

The purpose of this Citizen Participation Council is to promote the Valencian Anti-Fraud Agency’s relationship with civil society and citizens, facilitating their communication and relationship.

Its functions include, among others, advising the Agency on the general lines, objectives and specific initiatives deemed appropriate; the preparation of reports, proposals and recommendations for the prevention of fraud, the fight against corruption and the promotion of a culture of good practices, integrity and public ethics in Valencian public institutions; the evaluation of the fulfillment of the functions and purposes entrusted to the Valencian Antifraud Agency, and its results; the strengthening of relations with Valencian society through the establishment of channels of participation and collaboration; and the promotion of spaces for debate, meeting, reflection and exchange of information and experiences.

The Participation Council, regulated in the Agency’s internal regulations and operating regulations of June 27, 2019, in its title VI, which includes articles 24 to 26, is chaired by the director of the Agency, by twelve integrated members by representatives of civic organizations of a social nature that work against fraud and corruption in the Valencian Community or have among their purposes the transparency of public activity, good governance and the defense of the rights of citizens, and by four other voices more designated among expert and independent people, of recognized prestige and whose trajectory or legal, academic and social activity is related to the functions and purposes of the Valencian Anti-Fraud Agency.

Specifically, the following people have attended the meeting, representing civic organizations of a social nature:

Mr. Juan Carlos Galindo Gómez, Executive President of the Spanish Association for Obliged Subjects in the Prevention of Money Laundering.

Mrs. Azahara Peralta Bravo, member of the Platform for Honesty.

Mr. José Ribera Facundo, coordinator of relations with other associations of the Platform Ciutadana Castelló per la Justícia i Contra la Corrupció.

Likewise, the four elected members of the Participation Council attended the meeting, namely:

Mrs. Vanesa Felip Torrent, President of the College of Secretaries, Auditors and Treasurers of the Local Administration of Valencia.

Mr. Fernando Jiménez Sánchez, professor of Political Science and Administration at the University of Murcia.

Also present was Mr. Francisco Gaspar Latorre, territorial coordinator of the Union of Technicians of the Ministry of Finance, as a guest entity.

In this first session of the Participation Council, in which said body has been formally constituted, the civic organizations then elected the person who will occupy the Vice Presidency, the Council of the Activity of the Agency, on the part of its director, have dealt with various points on which some members of the Council have shown their interest and concerns, and it has been proposed to form some working groups within the Council to deal with specific issues.

The Vice Presidency of the Participation Council fell to Dª. Ana María Fuertes Eugenio, representing the Foundation for Justice.

All those attending the meeting celebrated the constitution of this advisory and participatory body, a pioneer within the Spanish scene, and have expressed their commitment and willingness to collaborate in the fight against corruption and eradication of fraud in our institutions and public administrations, as well as its special concern for the need to carry out prevention and education tasks in this area, concentrating efforts that allow a true multiplier effect.

In this regard, it has been agreed to create two working groups that will make it possible to agree on common strategies within the scope of the protection of whistleblowers, and also in prevention and public ethics.

The composition of the plenary session of the Participation Council, which will meet at least twice a year, will be published in the coming days in the Official Butlletí de les Corts and in the Official Gazette of the Generalitat Valenciana.

For further information you can reach to gabinete@antifraucv.es or by telephone 962 787 450