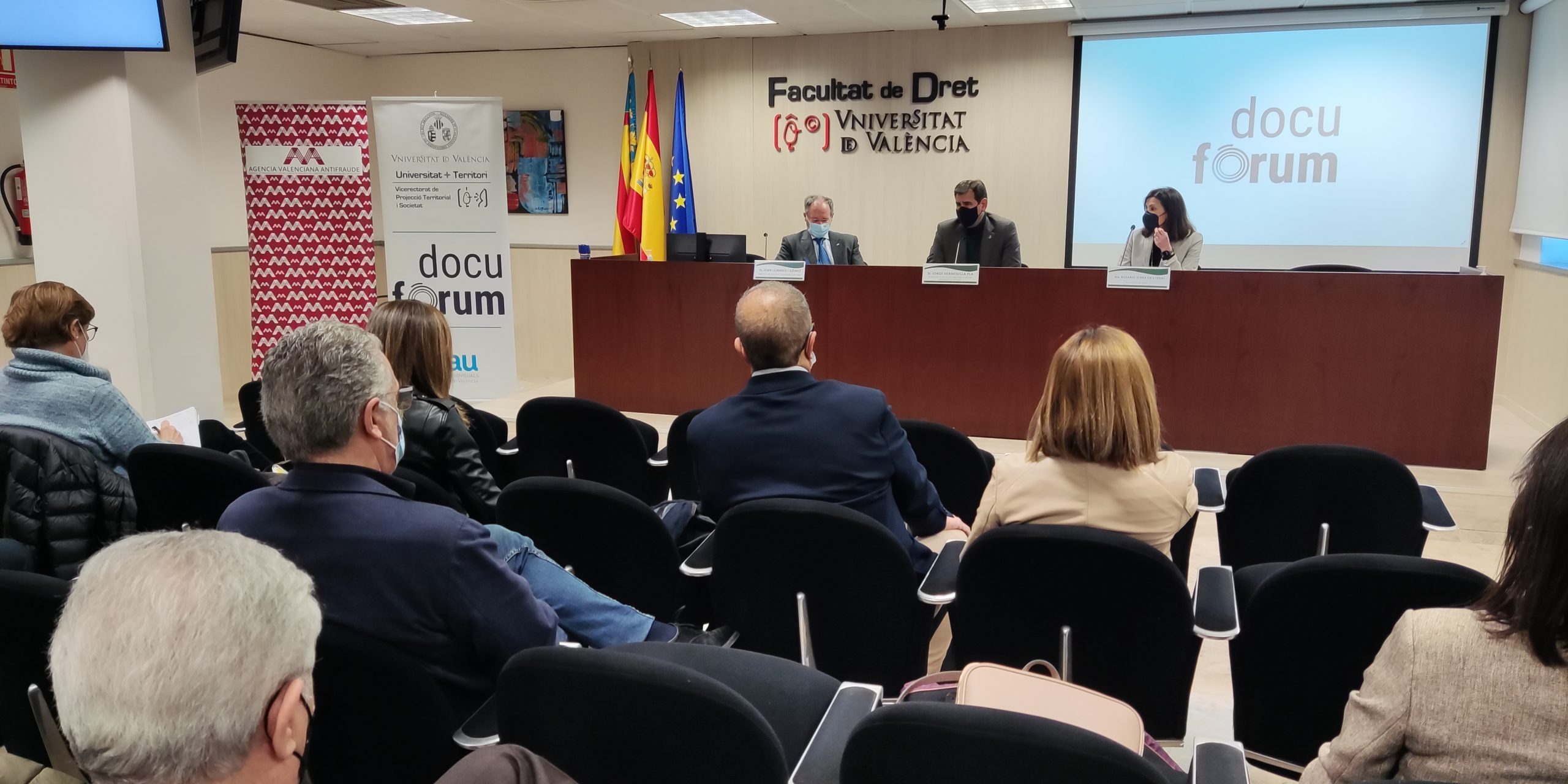 Valencia, Tuesday, February 8. In the presentation, which was held today at 12:00 noon, in the “Ascensión Chirivella” Hall of Degrees of the Faculty of Law, Jorge Hermosilla, vice-rector for Territorial Projection and Society of the UV; Joan Llinares, director of the Valencian Anti-Fraud Agency (AVAF); and Rosario Serra, Vice Dean of the Faculty of Law.

The documentary shows the strategic importance of planning, which profoundly reduces management practices based on improvisation, lack of general vision, proposals inconsistent with the specific functions of specific departments, facilitates transparency and accountability of the Institutions , and acts as an element of prevention of fraudulent and corrupt practices of public management.

Vice-rector Jorge Hermosilla has underlined the importance of institutional collaboration, since “this documentary is the result of the joint work of two institutions at the service of Valencian society, such as the University of Valencia and the Valencian Anti-Fraud Agency, both aware of the importance of investigate, reflect and disseminate concepts such as ethics, transparency and good practices”. He added that strategic planning applied to public management is a very interesting instrument for improving management itself and its results.

For his part, the director of the AVAF, Joan Llinares, pointed out that “planning is a key tool to prevent the risks of corruption in public administrations, since without it, general interests cannot be prioritized, with the culture of improvisation and of “urgent” versus “important”.

“The Valencian Anti-Fraud Agency has drawn up a recommendation on the need for planning since the lack of it leaves the door open to other risks such as conflict of interest, unjust enrichment or lack of control of the activity of public institutions”, added Llinares.

Docufòrum is an audiovisual format promoted and designed by the Office of the Vice President for Territorial Projection and Society and produced in high definition (HD) by the Taller d’Audiovisuals (TAU), which addresses current issues and social interest in a documentary style. Docufòrum not only has an informative vocation, but also aims to stimulate debate and social participation. The documentaries, lasting 20 minutes, collect the opinions of specialists from both the University of Valencia and the Valencian social or business sphere.

This documentary has been financed by the Valencian Antifraud Agency, within the collaboration framework agreement signed by both institutions. The person in charge of content has been Anselm Bodoque (AVAF).

Docufòrum is the result of a group work, the technical coordination is carried out by the Support Unit to the Vice-rectorate for Territorial Projection and Society, the scriptwriting of the documentaries is carried out by the professors of the University of Valencia Francesc Martínez (Theory of Languages and Information Sciences) and Rafa Roca (Catalan Philology), and the realization is undertaken by the Taller d’Audiovisuals de la Universitat (TAU). For its part, the Valencian Anti-Fraud Agency, through the Training Service, carried out the preparation of the preliminary aspects referring to the main questions that could be dealt with regarding the planning of public management, the selection of a basic bibliography in the matter and the proposal of specialists.

The complete audiovisual is available at the following link: