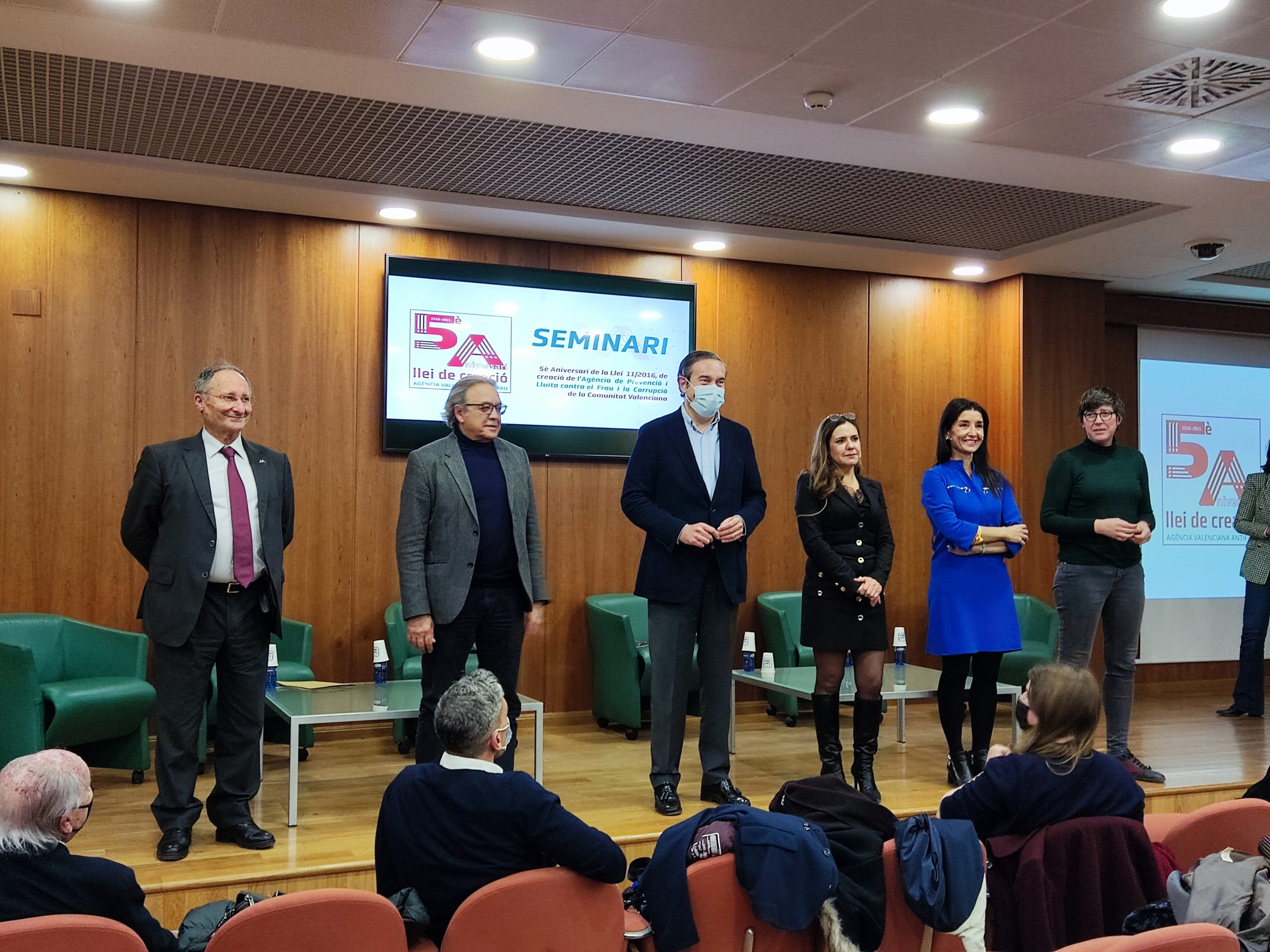 Valencia, November 29, 2021.- The Valencian Anti-Fraud Agency has organized a seminar to celebrate the 5th anniversary of the approval of Law 11/2016, creating the Agency, which has been followed by more than 150 people from face-to-face and online.

The first table was entitled “Citizenship against corruption” in which civil society entities that are part of the Agency’s Consell de Participació have participated and that at the time proposed the election of Joan Llinares as director of the Agency before the Valencian Parliament.

The second table has dealt with “The costs of corruption” and experts in this area have participated such as Francisco Alcalá, professor-researcher at the Valencian Institute of Economic Research (IVIE); Francisco Cardona, OECD consultant and Fabiola Meco, assistant professor Doctor of Civil Law at the University of Valencia. The table was moderated by Teresa Clemente, Director of Legal Affairs of the Agency.

In the afternoon, the day was resumed with two more tables. The first one has dealt with the “Strategies for the prevention and fight against corruption in the Autonomous Communities” in which the directors of the anti-fraud offices and agencies in Spain have participated.

You can see the Seminar on the YouTube channel of the Valencian Anti-Fraud Agency at this link: https://www.youtube.com/channel/UCkDS5OEUZu3iTEWg7gu8XXQ 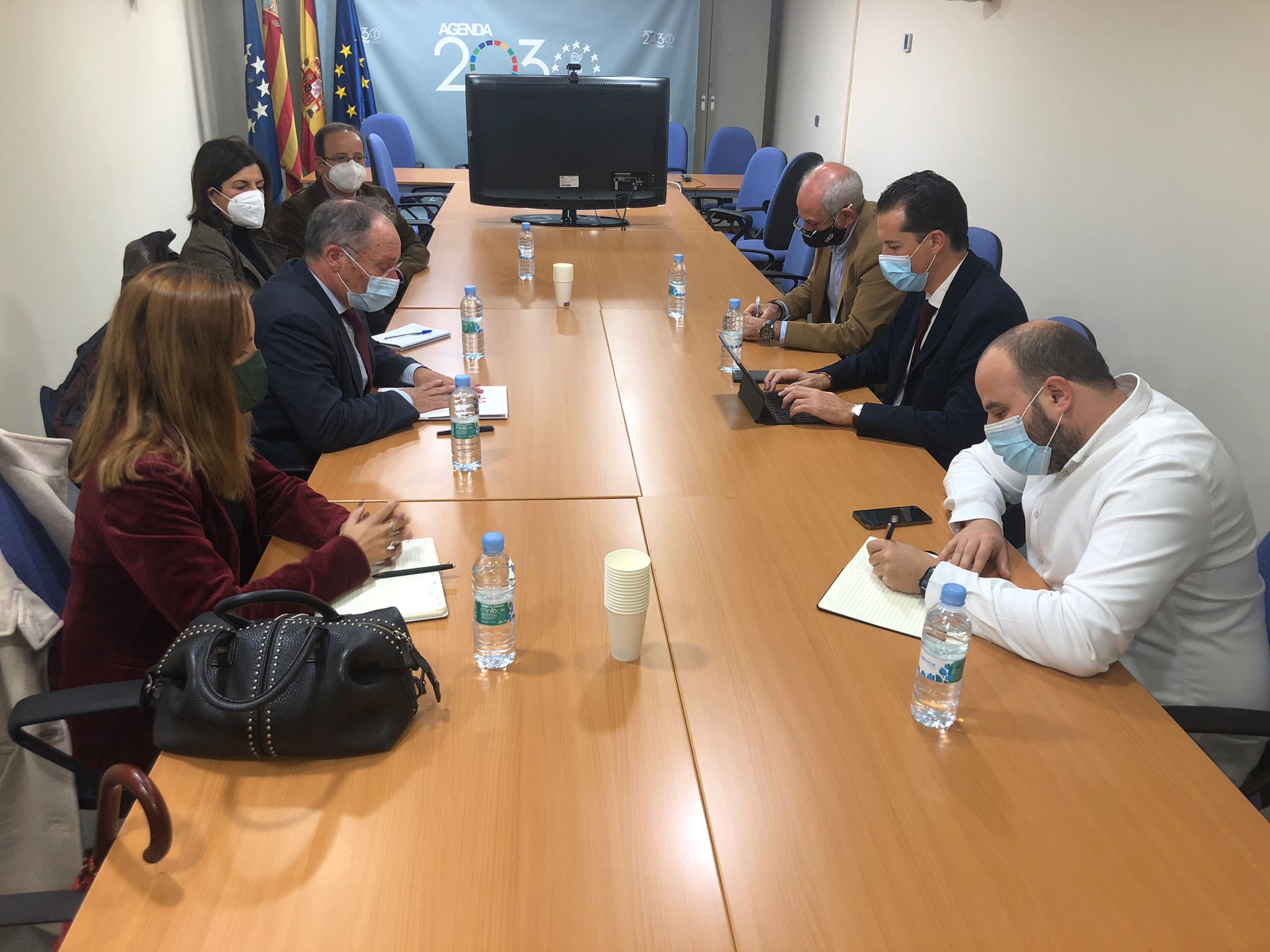 The president of the Valencian Federation of Provincial Municipalities, Rubén Alfaro, and the director of the Valencian Anti-Fraud Agency, Joan Llinares, have held a meeting to establish ways of collaboration to help city councils to develop their anti-fraud plans.

The FVMP will inform all Valencian municipalities of the need to have an active anti-fraud plan of measures as of January 1, 2022 and different meetings will be held with municipalities and councils for the implementation of said tool by the consistories.

The president of the FVMP, Rubén Alfaro, has indicated that “it is about the landing in our consistories of a tool that will ensure the proper use of funds from Europe. Another step towards integrity, transparency and good governance in all public policies ”. In addition, he added that “from the FVMP we will put all the tools that are within our reach to facilitate this work for our municipalities”.

As published in the BOE last October, through Order 1030/2021 of the Ministry of Finance, “every entity, decision-maker or executor, that participates in the execution of the Recovery and Transformation Plan measures must have a Plan anti-fraud measures ”.

Any administration or even private intermediaries must establish risk maps, declarations of absence of conflict of interest, ethical codes, complaint mailboxes, alert systems, training courses for their managers or gift and confidentiality policies.

“The Valencian Anti-Fraud Agency wants to help municipalities and provinces in the preparation of public integrity plans that have become a requirement after the approval of the Order of the Ministry of Finance 1030/2021 as a requirement to access funds Next Generation. To this end, the Agency has prepared the Guide “Public integrity plan: roadmap and facilitating annexes” which we have delivered this morning to the President of the FVMP “, declared Joan Llinares

CELEBRATION OF A CONFERENCE TO THE “MASTER IN CULTURAL MANAGEMENT” AT THE UPV, FACULTY OF SOCIAL SCIENCES

Participation in the Conference “Anti-Fraud Plans in the Management of the Recovery, Transformation and Resilience Plan” UJI Castellón.