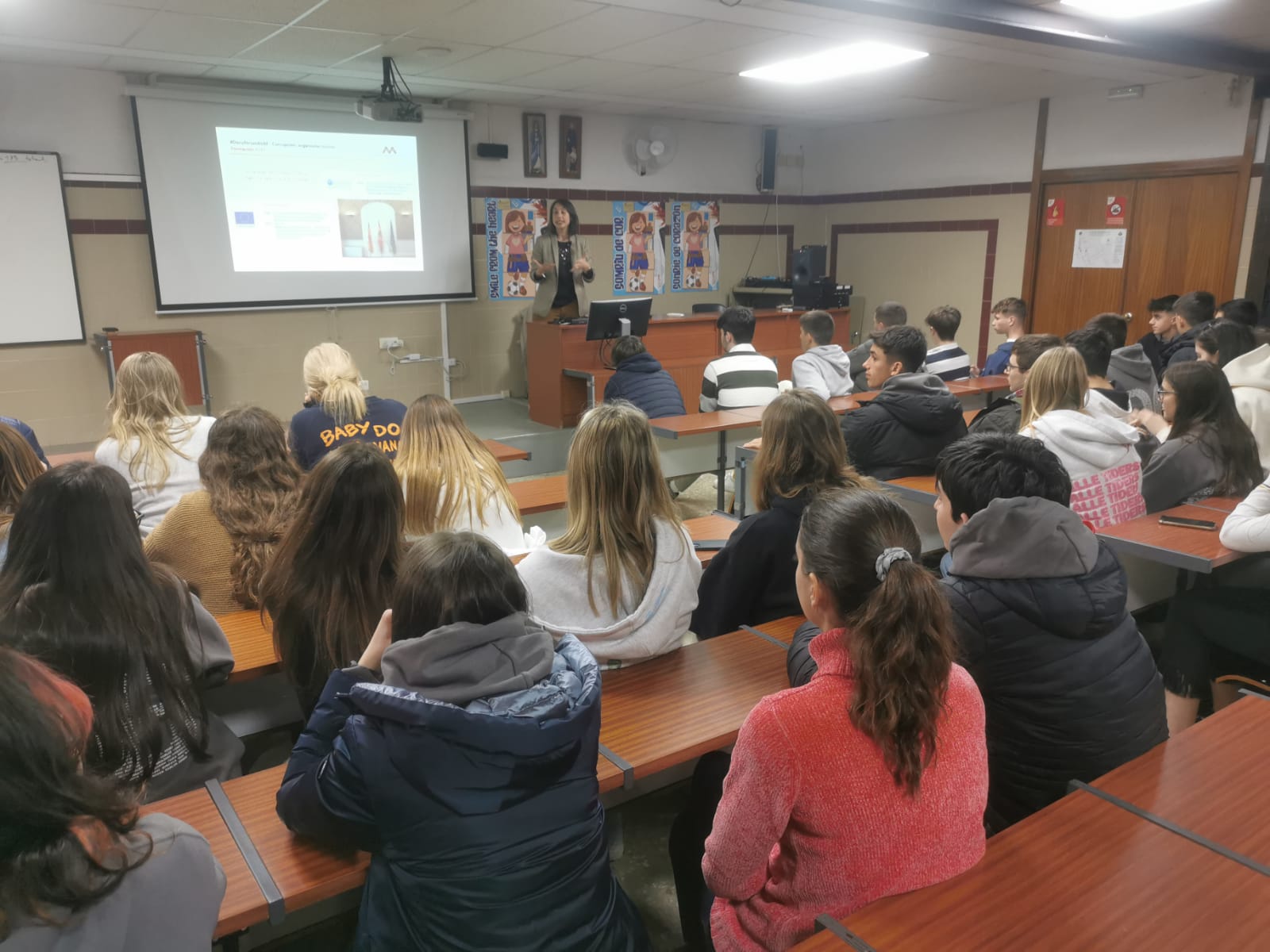 #DocuforumAVAF begins the year 2023 in the 1st year of high school classrooms of the Colegio Maristas de Algemesí (Valencia) with “Corruption: harmful organism”

The #DocuforumAVAF training activity began in 2023 in the town of Algemesí, in the Ribera Alta region.

The Agency’s learning experience consists of several phases and aims to make students reflect on strategies to combat fraud and corruption in society, paying special attention to the need to protect people who report corruption.

The students of the 1st year of high school of the Nuestra Señora de la Salut – Maristas de Algemesí School had the opportunity to see the documentary “Corruption: harmful organism” on Pandora Box TV, in a first session with their teachers and warn of the retaliation against those who are subjected to corruption whistleblowers. 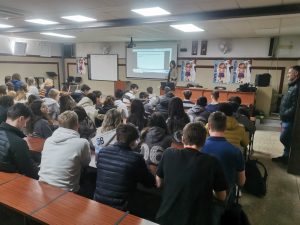 Last Monday, January 16, in a second session carried out in the classroom by the training technician Pilar Moreno, the students were able to resolve their doubts and questions regarding the daily risks faced by people who report and how corruption is prevented and pursued.

The figure of the controllers of the local administration, the conflict of interest, the anti-corruption agencies or what younger people can do to avoid fraud and corruption, were some of the issues raised and debated by those present at the activity.

The Valencian Antifraud Agency through #DocuforumAVAF has the opportunity to show in the classrooms of schools, institutes and universities throughout the Valencian Community, its objectives, functions and present and future challenges in matters such as public integrity, prevention and protection from whistleblowers of corruption. Gamification in the classroom is used in this training activity to stimulate debate and student participation.

In the docuforum on January 16 in Algemesí, 55 were the participants, including students from the Erasmus Plus program who had recently arrived from Norway. During the session there was the opportunity to compare the data on the perception of corruption in Norway and Spain, thanks to data from Transparency International, as well as the democratic quality index of the University of Gothenburg. The differences between the two countries were notable, which surprised those present.

If you are a university or high school teacher in the Valencian Community and you are interested in having the training activity “Docuforum: Corruption, harmful organism” carried out in your classroom, do not hesitate to contact the training service of the Valencian Anti-Fraud Agency at via formation@antifraucv.es

Embezzlement reform will give carte blanche to impunity

On December 9, 2022, the beginning  of the celebration of the twentieth anniversary of the UN Convention against Corruption was  commemorated.    And precisely this signon December 9, forgetting the progress andbenefits of recent decades in the fight against corruption, has been the moment chosen to introduce into the parliamentary debate a very ill-advised proposal  to reform the crime of embezzlement.

The proposed amendment seeks to  replace the  current regulation of  embezzlement, which is currently configured in the broad concept of  unfair administration of public assets, to return to the limited structure and previous drafting of 1995, which   only  It consideredpunishable the concrete appropriation of public property.

The return to the 1995 newsroom is a real step backwards in the fight against corruption, since it hastaken a clean sweep of all the advances that have been taking shape in the legal regulation of embezzlement over the years, particularly since the United Nations Convention.

The current regulation of embezzlement, of 2015, is upone a  technical improvement a-legal of  notable importance, it should be noted that  the return to the outdated regulation of 1995 will mean going through the disappointment of  the numerous judicial procedures in which, although the existence  of acts of corruption had been proven.  However, it was not  possible  to condemn the technical shortcomings of that regulation.  An example is  the scandal of the municipal funeral home of  a City Council that, valued at more than 7 million euros, was sold at public auction for the shameful amount of € 0.60. And despite the seriousness of the fact, the Supreme Court could not convict, since the crime of embezzlement in the 1995 wording did not typify cases such as the sale of public assets below its price. On the contrary, the current regulation of 2015, in its concept of unfair administration, does allow the punishment of this type of corrupt actions.

Nor is it correct to return tothe outdated concept of profit in embezzlement.  In this type of corruption, the decisive factor is not that  the authority or official profits or tries to benefit a third party, but the damage caused to    the  citizenry.  Embezzlement is a crime of damage to  the administration and public property, which excludes the need  to include a profit motive.

And it is also a  mistake to try to establish atype  of mitigated embezzlementfor those cases in which, without there being a spirit of appropriation, the public patrimony is destined to private and alien uses.   Thediversion of the public from its destination, for the benefit of private uses and those outside the public function,   should not be deserving  of an attenuated penalty. Thus, the technical coldness of criminal typicity deserves in the present case to be put in front of the mirror of  reality and the concrete assumptions of everyday life. This is the case, among other common examples, of a  mayor who cedes the use,  to a private mercantile for  disco activity, of  the ground floor of a public building, initially projectedor destined for a municipal nursery school. The action, very serious,  with the amendment of reform of embezzlement would be configured with a penalty of such a sunor 6 months in prison.

The amendment for the modification of the crime of embezzlement aims to return to the typical regulation of 1995 but maintaining the penalties of 2015,  which does not seem dissuasive or successful and this because  the penalty set in the  comparable legal systems of the European Union turns out to be more severe, a path that should be followed in the internal system.

Thus, under French law the offence comparable to embezzlement, ‘la soustraction et détournement de biens’, is punishable by ten years’  imprisonment;  Article314 punishes the appropriation by an official of money or movable property – both public and private – with imprisonment of three to ten years.

The intended modification of the crime  of embezzlement means giving carte blanche to impunity in embezzlement, limiting the possibilities of the system fighting against this scourge of democracy.

The return to the 1995 regulation of the crime of embezzlement will mean that numerous actions, which are contrary to the correct administration and the proper use of public assets, will not be duly prosecuted, which will affect the quality of services for citizens, since corruption entails a decrease in the quality of education,  health, social protection and other public sector activities.

Lawyer of the Valencian Anti-Fraud Agency 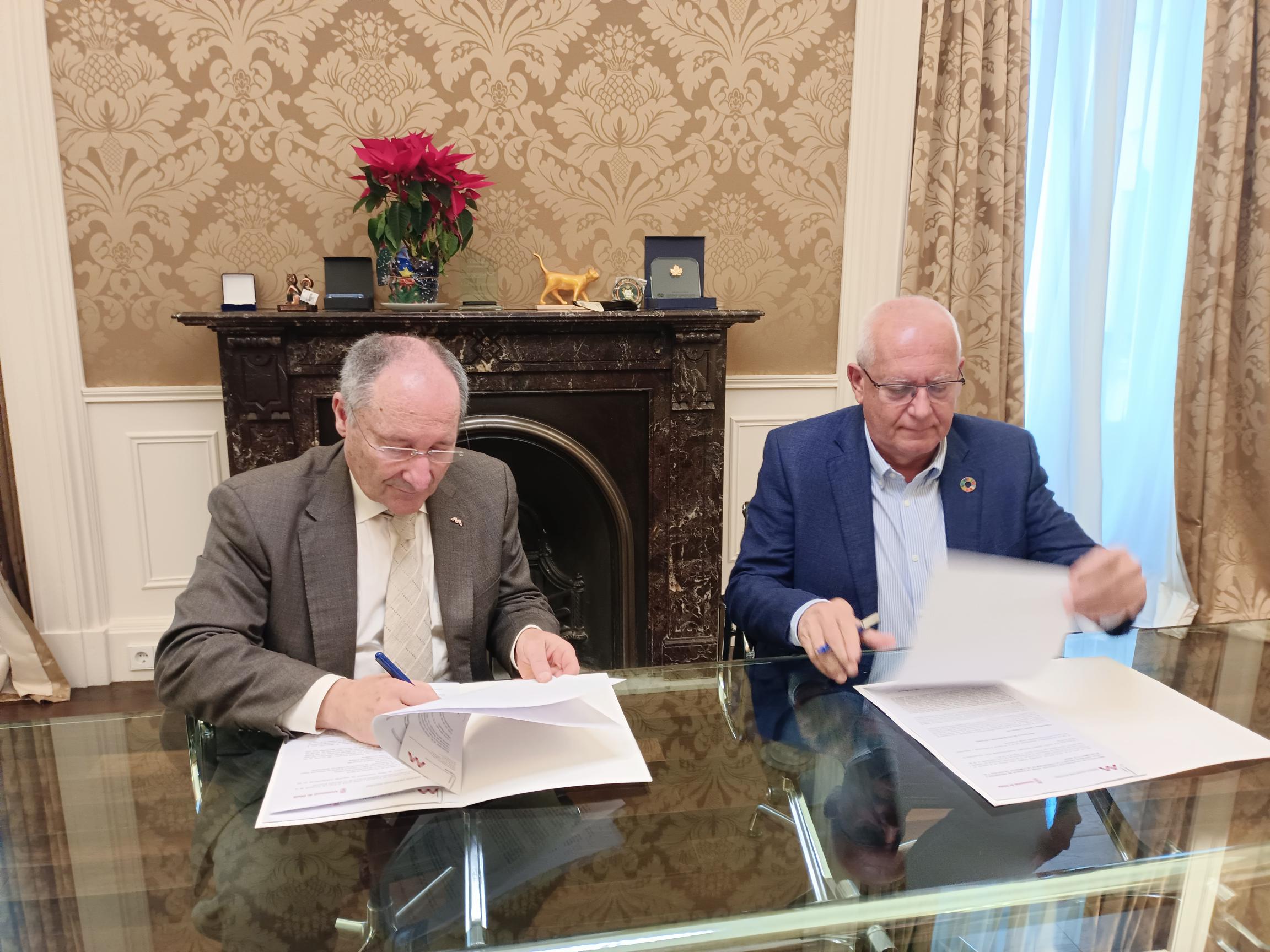 Valencia, December 21,  2022.- The mayor of Dénia, Vicent Grimalt and the director of the Valencian Anti-Fraud Agency, Joan Llinares, have signed a collaboration protocol between both institutions that will help promote the Integrity Plan in which the City of Dénia is working.

Within the general lines of the Integrity Plan, the implementation of both internal and external complaint mailboxes is contemplated, thus complying with the requirement of the  European Directive 1937/2019 on the protection of people who report breaches of Union Law, better known as the Whistleblowers Directive.

The Aandanointing  of Dénia to enable as an external channel of complaints the mailbox of complaints of the Valencia Antifraud Agency which will be visible on the municipal website;  A mailbox that guarantees the confidentiality of whistleblowers, as well as allows the possibility of being able to make complaints anonymously.

The collaboration between both institutions will  also extend to other actions and activities such as those of a formative nature where the staff of the municipality will receive training in aspects related to the promotion of ethics and public integrity, as well as the prevention and detection of situations constituting fraud and corruption.

For the mayor of Dénia, Vicent Grimalt, “The assessment of the firm is positive, because the City of Dénia works to ensure that, in its scope of action, public funds have been used in accordance with the applicable regulations, in particular, with regard to the prevention, detection and correction of fraud, the  corruption and conflicts of interest. In addition, the City Council has a clear commitment to transparency, for this reason it has achieved the Infoparticipa seal  in the  last two editions and is one of the most transparent municipalities in the Valencian Community.

For his part, the director of the Agency, Joan Llinares, said that “it is positive to see how every day more municipalities  and institutions begin to equip themselves with instruments to fight fraud and corruption and they do so not only with reactive measures such as reporting channels, but also from prevention with training and awareness actions. “

“It is undoubtedly good news that  the City of Dénia will have complaint mailboxes, both internal and external, but more important is if possible that it has committed to approve a municipal Integrity Plan”, added Llinares.

CONFERENCE “PUBLIC INTEGRITY AND RISKS IN PUBLIC MANAGEMENT” IN ALICANTE