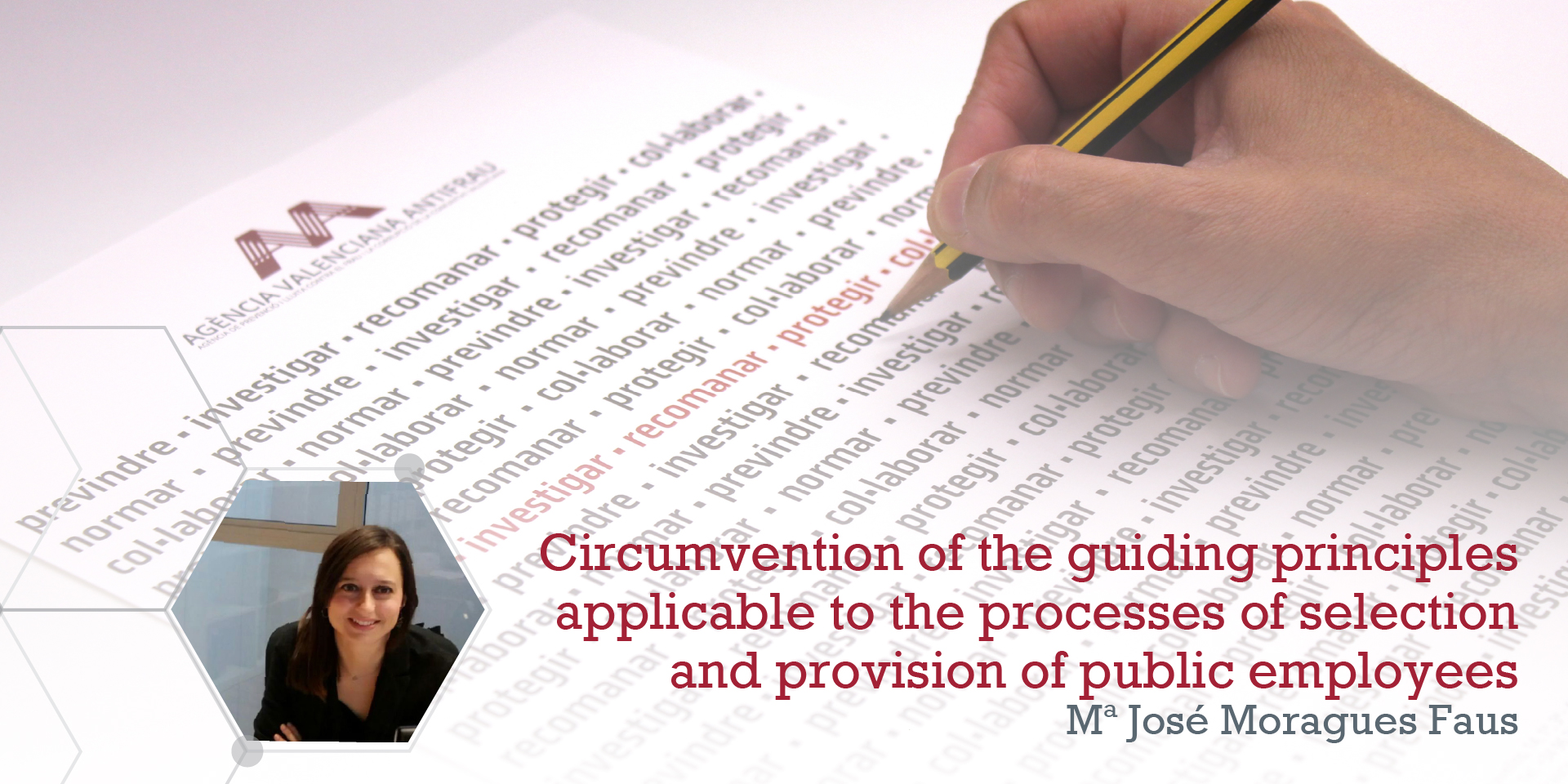 In 2021, the number of complaints filed with the Agency for the Prevention and Fight Against Fraud and Corruption of the Valencian Community related to human resources has accounted for 45% of the total, and within these, those related to alleged irregularities in the selection processes, access and provision procedures, account for 35% of the total, which represents almost 4 out of 10 complaints filed during the year 2021.

These data invite us to reflect on the effective application of the inspiring and guiding principles of access to public employment.

Equality, merit, capacity, transparency, publicity, impartiality, independence and professionalism are, among others, the guiding principles of access to public employment that are included in the Constitution and in the consolidated text of the Law of the Basic Statute of Public Employees, principles known by all of us who work at the service of the public.

But does theoretical knowledge of these principles imply their internalization and application at the time of participating in a selection process or the provision of a position, either as an applicant or as a member of a technical selection body?

The violation of the principle of equality occurs, for example, in cases in which anonymity is not guaranteed in the performance and correction of the tests carried out in the different procedures, when anonymization is mandatory whenever possible. The lack of anonymization is an administrative irregularity that can imply the nullity of the process, being especially relevant in the tests in which the technical selection body enjoys a space of appreciation, and in which the guarantee of anonymity it is, in the words of the Supreme Court (1), “a tool at the service of achieving, to the greatest extent possible, the effectiveness of the constitutional principle of equal access in access to the public function”.

The violation of the principle of equality, together with those of merit and ability, is also evident in selection processes in which personal interviews are used to select the most suitable candidate. It is not that interviews cannot be carried out, it is not that, in fact the regulations allow them to “complete” the rest of the tests of the selection process and they can be a good tool with proper use. A different thing is their fraudulent use when they are decisive for the final decision adopted by the technical selection body, due to the weighting given to them in the selection process and, above all, due to the lack of establishment prior to carrying out certain criteria more possible objectives to take into account for the evaluation of the candidates, the lack of archive in audiovisual support of the development of the same for a later verification if necessary, as well as the lack of reflection in the minutes of the evaluation carried out by the members of the court after the development of the aforementioned interview by each of the applicants.

The frontal attack on all the guiding principles of access to public employment contained in the revised text of the Law on the Basic Statute of Public Employees of 2017 and the Spanish Constitution occurs in cases in which evidence is leaked to someone of the applicants before they are carried out. At that moment, these principles become a mere rhetorical statement that has been stripped of all the ethical and moral burden that compliance with them entails. Both public employees who access their jobs with this type of internship and public employees who are part of the technical selection bodies that allow them, encourage the creation or permanence of clientelism in the administration as well as the creation of a structure at the service of the authority and of those who represent it and not of the general interest, a structure that facilitates, on many occasions, political and official corruption.

This clientelism is itself, in the words of Carles Ramió (2), “a vector of corruption, which also opens the door to other corrupt dynamics such as the lack of empowerment of some public employees in the face of political positions to whom they “owe” the privilege of working in the comfort of a public Administration, far from the cold of the unemployment crises that private companies embrace”. The aforementioned author makes it clear that “the de facto politicization of public employees and their fear of losing their positions for political or discretionary reasons assures political positions of unbroken loyalty that easily crosses the barriers of professionalism and ethics. of public servants”.

The occurrence of these situations is very serious in the selection processes of all levels and professional categories of public employees, but it is especially visible in positions of responsibility in the civil service. It is about those employees who must work side by side with the institutional representatives, who must advise them so that their decisions, regardless of the political party and ideology they represent, serve the public interest and not individual goals or those of powerful groups seeking a concrete profit, many times besides the current legality.

At the Valencian Anti-Fraud Agency we understand that a well-selected public administration resists political changes and is not at their mercy, responds with professionalism and rigor to the challenges and situations that arise, and guarantees objectivity in the development of the work of the employees that comes to shape a previously defined public policy. Therefore, the selection of public employees based on the guiding principles set forth here should be an objective of each government team of every administration, and non-compliance with them should be fully rejected by the citizenry. 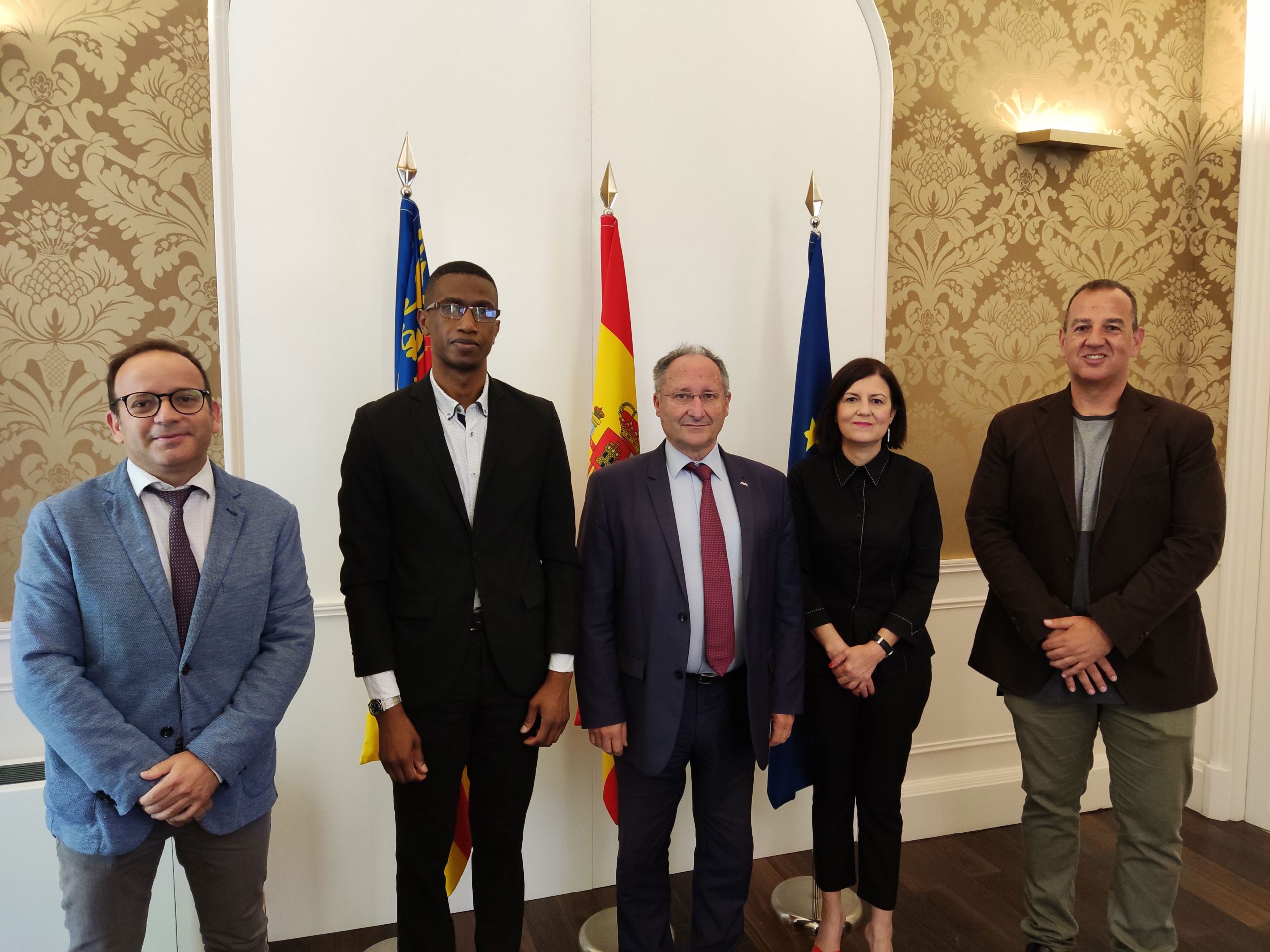 The Valencian Anti-Fraud Agency has received a visit from a representative of the Departmental Comptroller of Valle del Cauca of the Government of Colombia.

The director of the Avaf, Joan Llinares, accompanied by the deputy director and legal services director, Teresa Clemente, the director of Analysis and investigation, Gustavo Segura, and the director of Prevention, Training and Documentation, Víctor Almonacid, held a meeting with Jhon Frank Vente, Coordinator of Internationalization and Agenda 2030 of the Comptroller.
Both institutions have agreed to establish collaboration agreements in the fight against corruption and the protection of whistleblowers.

Dialogues at Avaf with Borja Colón

On this occasion, Irene Bravo, head of the Agency’s prevention service, spoke with Borja Colón, head of the administration and administrative innovation service of the Castellón Provincial Council. Among the issues that it has dealt with is the new Transparency and Good Governance Law of the Valencian Community approved in March 2022.