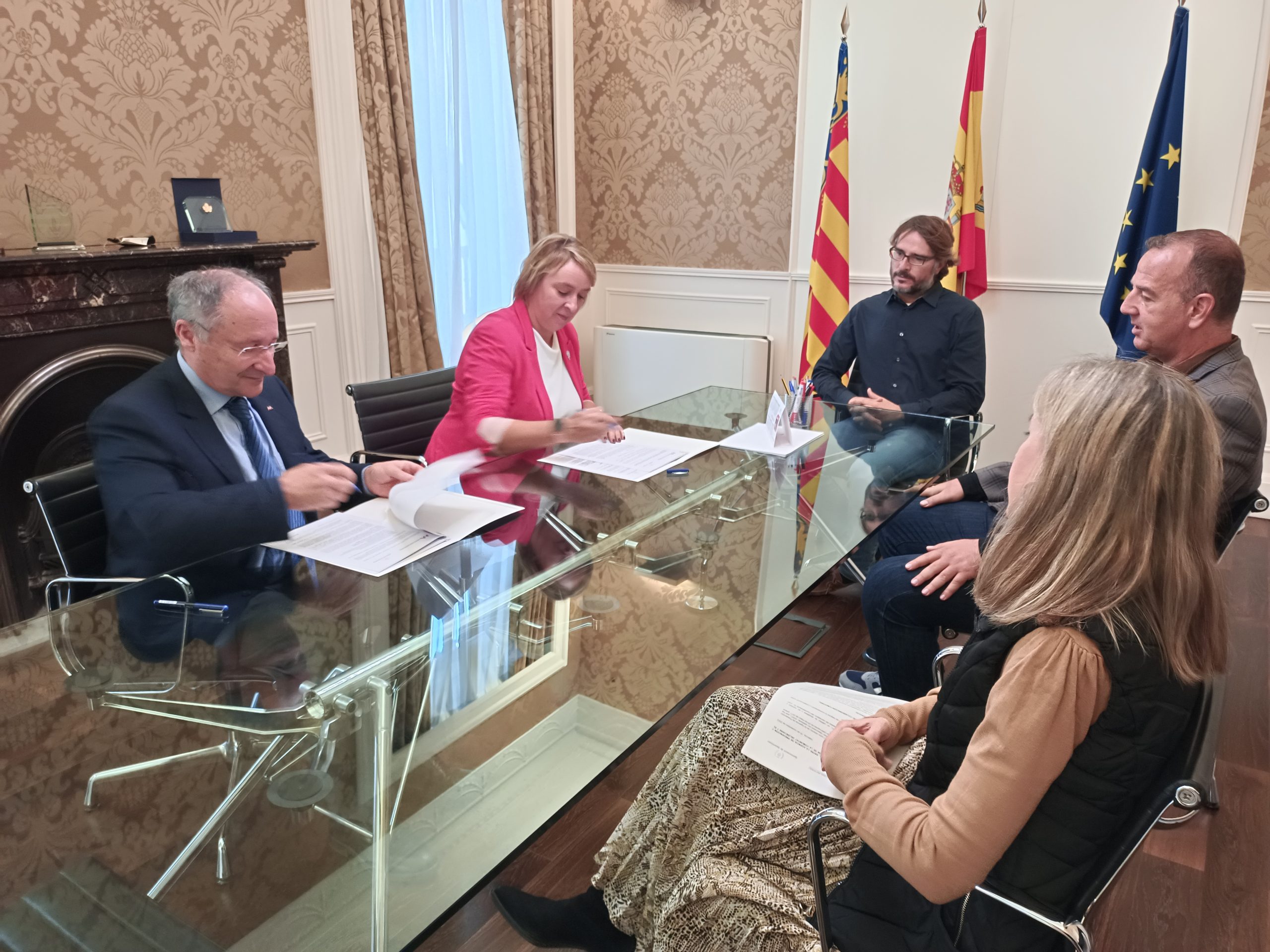 Valencia, November 15, 2022.- The mayor of Benetússer, Eva Sanz, and the director of the Valencian Anti-Fraud Agency, Joan Llinares, have signed a collaboration protocol between both institutions that will help promote the Municipal Integrity Plan in which the City Council of Benetússer is working.

Within the general lines of theIntegrity Plan, the implementation of both internal and external complaint mailboxes is contemplated, thus complying with the requirement of the European Directive 1937/2019 on the protection of persons who report onbreaches of Union Law, better known as the Whistleblowers Directive.

The City Council of Benetússer will enable as an external channel of complaints the mailbox of the Valencia Anti-Fraud Agency which will be visible on the municipal websitepal; a mailbox that guarantees the confidentiality of the complainants, as well as allows the possibility of being able to make the complaints anonymously.

The collaboration between both institutions will also extend to other actions and activities such asthose of a training nature aimed at the staff of the municipality who will receive training in aspects related to the promotion of ethics and public integrity, as well as the prevention and detection of situations constituting fraud and corruption.

The mayor of Benetússer, Eva Sanz Portero, stressed the importance of “contributing to the creation of a social culture of defense of ethics for which we are committed to working, side by side with the AVAF, with the clear objective of advancing in the integrity of public institutions with the collaboration of citizens”.

For his part, the director of the Valencian Anti-Fraud Agency, Joan Llinares, said that “it is positive to see how every day more municipalities and institutions begin to provideinstruments to fight fraud and corruption and do so not only with reactive measures such as reporting channels, but also from prevention with training and awareness actions. “ 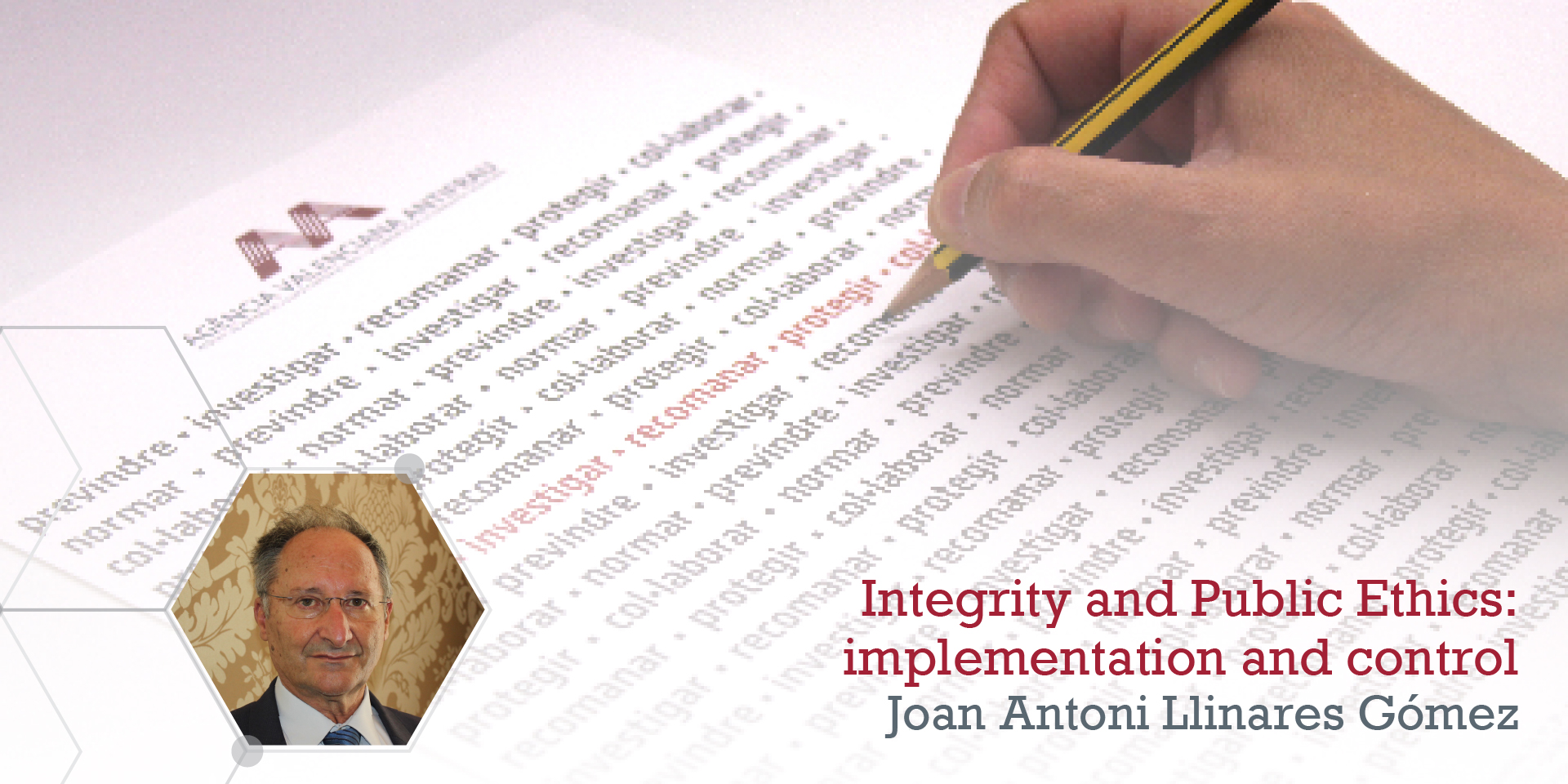 Public integrity: Prioritizing public interests over private interests. Align with the values, principles, and norms shared by the community.
Public ethics: governing and managing the public by doing things right.

Corruption is quite the opposite. It is the degradation of ethics and integrity. It protects the rule of law and impedes its normal functioning by threatening the constitutional principles which inspire it, in particular that of the submission of all public powers to the legal order, that of the equality of all before the law or the obligation of the public administration to objectively safeguard the general interests in accordance with Art. 103 EC.

In a conference within the training activities of the Valencian Anti-Fraud Agency, the professor of history of philosophy of the Complutense University, José Luis Villacañas, affirmed that corruption not onlydoes not steal money but also dignity, in equal parts, and its systemic entrenchment It opens the way to tyranny and arbitrariness.

Theill-fated and also professor José Vidal-Beneyto always maintained that the fight against corruption is the fundamental challenge of our democracy and called for a general movement of condemnation against corrupt practices in which citizens were involved.

The first anti-corruption prosecutor that Spain had, Carlos Jiménez Villarejo, also in a conference given in Valencia on the occasion of the International Anti-Corruption Day, argued that the phenomenon of corruption in democratic States has structural causes that are related to the organization of the State, its Public Administrations. and the organization of public authorities. Among others, because of the inadequacy of controls when they abdicate their functions either out of passivity or because of more or less covert complicity.

And we could continue with quotes from other scholars of integrity and public ethics, Victoria Camps, Manuel Villoria or Adela Cortina who converge in placing in the fundamental axis of any political and governance system the duty to do what is right from the exemplarity of its rulers. It is useless to demand ethical behavior and regulatory compliance from citizens if those at the top of power do not set an example. Integrity is built from above and its cascading effect permeates the set of institutions.

The framework of public integrity in a State of law, projectable to any territorial or institutional public administration, is a legal system that is built on the firm intention of the respective highest representatives to comply with the law and consequently combat corruption. Legal norms followed by exemplary conduct in their solid compliance are necessary. Without rules and without a culture of compliance, it is impossible to put an end to the inertia that comes from centuries of abuses and diversions of power and appropriation of the public for the benefit of private interests. With rules, but without a culture of compliance, we open the doors to social cynicism. Nor is it good that the compliance systems that are gradually being incorporated remain mere formalities aimed solely at saving responsibilities.

The citizen feels the Public Administration as the superstructurefrom which the needs of society must be served by solving the problems that affect the general interest. Good governance is the way to fight against one of the scourges that does the most damage to democracy and the economy. Corruption diverts public resources to be given to technostructures or criminal organizations that can be embedded in our administrations and governments. According to the OECD, between 10% and 30% of major construction projects are lost due to ineffective controls and poor management. According to the IMF, up to 60,000 million euros Spain loses for corrupt or irregular behavior. Only, in bad practices in public procurement, the National Commission of Markets and Competition (CNMC) figures these losses at 40,000 million euros. And if that were not enough, the European Court of Auditors detected in 2013 that the construction of 1000 m2 of motorway costs in Spain under the same orographic conditions twice as much as in Germany. A few months ago, the CNMC sanctioned the six largest Spanish construction companies because for 25 years they have been concerting to share the awards of large public contracts… The list of indicators is endless.

Wecan argue that in our public ecosystem the general interest and the common welfare has too often been marginalized in favor of personal, corporate or interest group interests that, with strategies of revolving doors, bribes, influence peddling, illegal party financing, etc. They have taken decisions outside democraticchannels and general interests, thinking only of their own benefits. Predatory and speculative urbanism, for example, left in my land, Valencia, a trail of concrete skeletons and territory turned into wastelands, destroyed the financial system of an entire community by sinking its two large savings banks and a bank, the three centenarians. And it was all done thanks to the fact that many autonomous, municipal or state institutions irresponsibly succumbed to the immense power ofquick profit and the speculative economy. We are still paying for that sandcastle that collapsed in 2008 when the State had to assume the private debt generated by so much greed and irresponsibility.

Likewise, a good part of the services that the public administration must guarantee to citizens, have been losing over time their nature of public services to become private concessions of opaque management and appetizing objective for large companies whose capacity for influence and power are often superior to the own capacity of the administrations to control them or puta stop to them. . This imbalance has resulted in the capture of the public by corporations that are not accountable to anyone and that extract rents from citizens through rates and prices with little or deficient public control. As a result of recent actionsby the agency I direct, after the corresponding investigation, it was determined that a concessionaire of the water service of a municipality must return more than one million euros to the municipality. In another municipality, a developer must compensate the municipality in more than 21 million euros. The examples would be endless and you can know them through our website.

The way to fight corruption in our public administrations is to establish a framework of integrity and measures to prevent corruption that is articulated from the top down. From the firm intention of government teams to fight corruption to the establishment of transparency systems in contracting, concessions, urban planning, subsidies, access to public service … in short, in the management of the general public; codes of ethics and conduct for all, elected officials, temporary staff and officials, with ethics committees with broad capacity for action; anti-fraud plans and structured risk maps to strengthen weaknesses; reporting channels and alerts that allow citizen participation and public employees themselves in the detection of irregularities and breaches of the law; protection systems for whistleblowers and above all compliance without excuses with the United Nations Convention against corruption of 2003, ratified by Spain in 2006, establishing bodies for the prevention and fight against corruption such as those that have been created by some autonomous communities operatingthrough programs and systems that help publicadministrations to preventgoing, detection, run. Turn and persefraud and corruption wherethere is. These bodies must have the necessary means and sufficient resources to exercise their control tasks, guarantee their independence from the rest of the administrative bodies and that their accountability is carried out before the representative democratic bodies and before the citizens.

Only a firm conviction on the part of political representatives that, transparency, ethical codes and accountability must incorporate exemplarity, a culture of compliance and independent control bodies, both internal and external, impartial and with sufficient resources and means to fulfill their mission, will lead us to more efficient and firm public administrations. aligned with the general interest and the common good. In short, withintegrity and public ethics.

Director of the Valencian Anti-fraud Agency

Intervention of the X National Congress of Audit in the Public Sector held in Santa Cruz de Tenerife on November 10 and 11, 2022. Panel “Integrity and public ethics: implementation and control”

Friday, 11 November, 2022.- The Observatory of Governance, Transparency and CSR of the CEU Cardenal Herrera University (CEU UCH) delivered the Infoparticipa Stamps to the most transparent municipalities and councils in the Valencian Community.

After evaluating during 2021 a total of 52 transparency indicators on the websites of Valencian local entities, only 6 of the 542 Valencian municipalities and 2 of the 3 councils have met the requirements to obtain this Seal that accredits their transparency.

The rector of CEU UCH, Vicente Navarro de Luján, presided over the award ceremony, held in the auditorium of the Alfara del Patriarca campus. The mayors and councilors of the municipalities of Onda, Denia, Rafelbunyol, Elche, Valencia and Gandía, and representatives of the Provincial Councils of Valencia and Alicante have collected the Infoparticipa 2021 Stamps.

Together with the rector of the CEU UCH, the ceremony was chaired by the regional secretary of Participation and Transparency of the Generalitat Valenciana, Antoni Llorente; the deputy of Open Government and Participation of the Diputación de Valencia, Mentxu Balaguer; the head of the Transparency Service of the Diputación de Alicante, Antoni Canet; and the director of Analysis and Research of the Agència Valenciana Antifrau, Gustavo Segura.

Valencia and Elche, with 50 indicators, reach 96% compliance. Denia, with 47 indicators (90%), and Rafelbunyol, with 46 indicators and 88% compliance, complete the list of municipalities that have received the Infoparticipa 2021 seal at CEU UCH.

For its part, the Provincial Council of Castellón, with 27 indicators and 55.10% compliance, does not reach the level necessary to obtain the Seal in this 2021 edition.