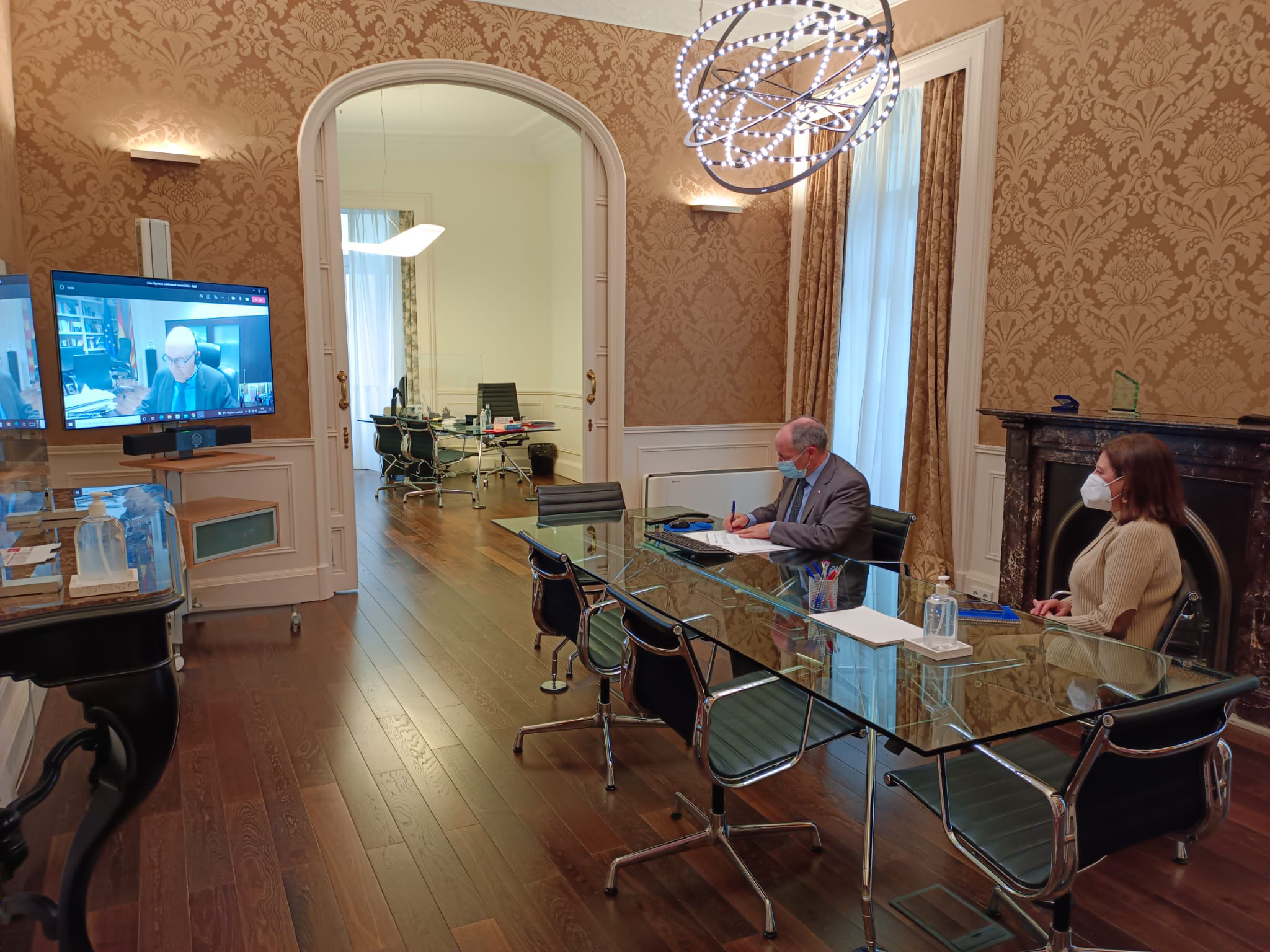 This agreement aims to maintain a permanent channel of collaboration and communication to improve efficiency in meeting objectives of common interest. Among other actions framed in this collaboration agreement are the sharing of information and practical experiences in the prevention and detection of corruption, the promotion of integrity and transparency both bilaterally and within the framework of the different forums in which both institutions participate. 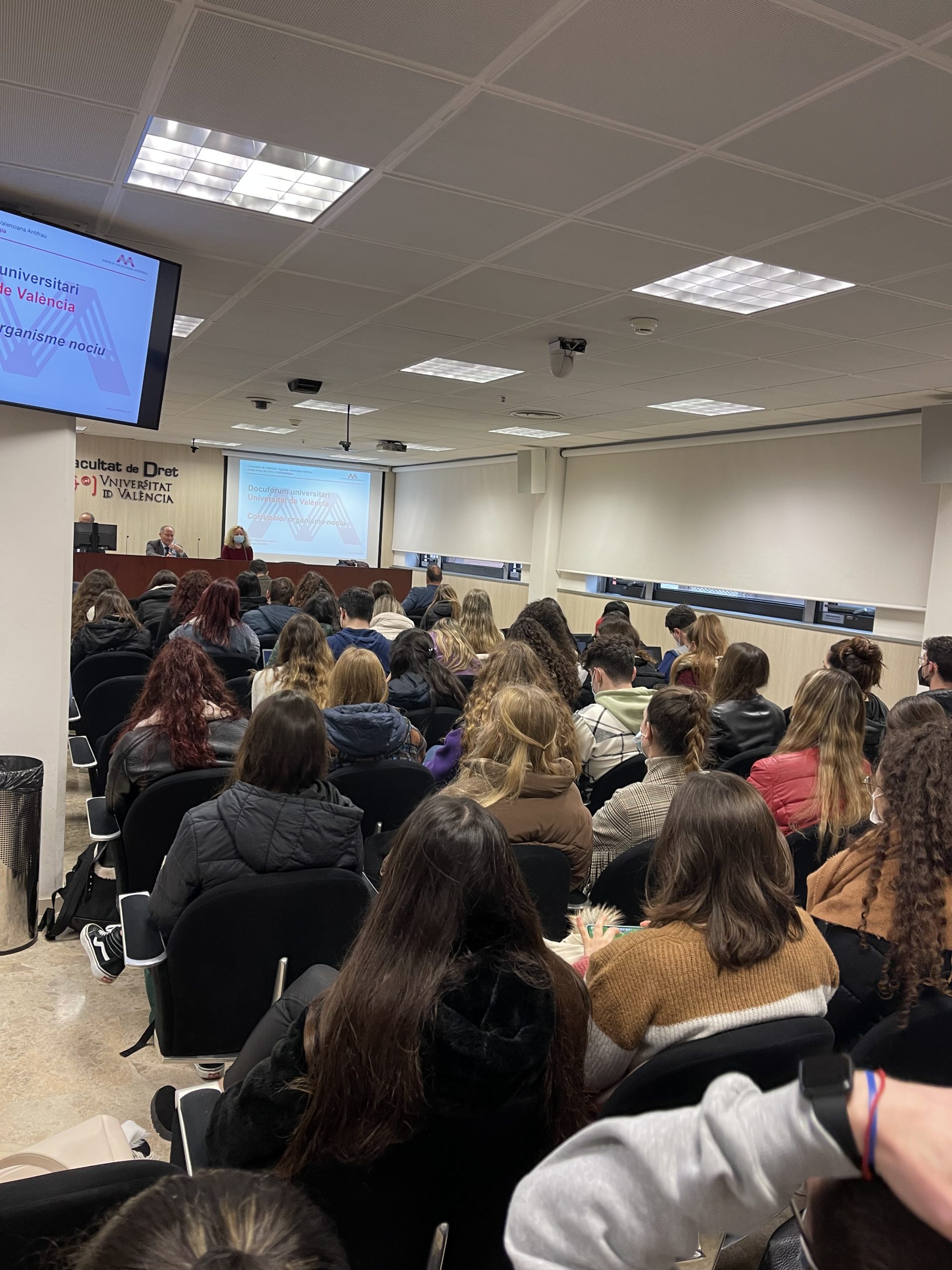 On March 21, a new university docufòrum of the Valencian Anti-Fraud Agency was held. On this occasion, the activity took place in the Hall of Degrees of the Faculty of Law of the University of Valencia, with second-year students of the double degree in Law and Criminology, with the assistance of 72 students of the subject of Constitutional Law II, of which Vicenta Tasa Fuster and Diego González Cadenas are professors.

After seeing the documentary “Corruption: Harmful Organism”, the students take part in the training experience, through reflections and questions that refer to its origin and the causes of corruption, the effect and collective costs it generates in economic terms, institutional quality and public morality.

On this occasion, the director of the Valencian Anti-Fraud Agency (AVAF), Joan Llinares, led the debate with the students, answered their doubts and insisted on the need to advance in public ethics and integrity, claiming the value and importance of society civil society and citizenship in the fight against corruption.

Likewise, in the debate, it was highlighted that in order to fight against corruption it is necessary to break with a law of silence and complacency that is socially deeply rooted and it is necessary to be very aware that corruption eliminates the rights and opportunities of a life worthy of citizenship. And, in the same way, the importance of prevention and of a framework of integrity was underlined because corruption encounters greater difficulties, and because a new ethical culture can emerge in social terms.

The students have shown interest in anti-corruption measures at different levels: regional, state and European, as well as the causes and consequences. Many of the questions have also focused on the functions of the AVAF and showed concern about the current regulatory systems to fight corruption. Issues that have served to explain the policies and measures to combat corruption and the progress made in the Valencian Community in recent years, as well as all the work that remains to be done in the social and institutional sphere.

The AVAF develops training actions to offer knowledge and civic awareness, especially to future professionals, and foster a culture of prevention and fight against any conduct that encourages corruption.

This activity has been organized in collaboration with the University of Valencia, to which we thank for their interest and willingness to help create a culture of public integrity and rejection of fraud and corruption.

If you were a university, secondary or high school teacher and you are interested in the “Docufòrum” training activity, based on the audiovisuals of the Corruption Agency: harmful organism, Conflict of interest or Planning, being carried out in your subject, do not hesitate to contact the Training Service of the Valencian Antifraud Agency through formacion@antifraucv.es. 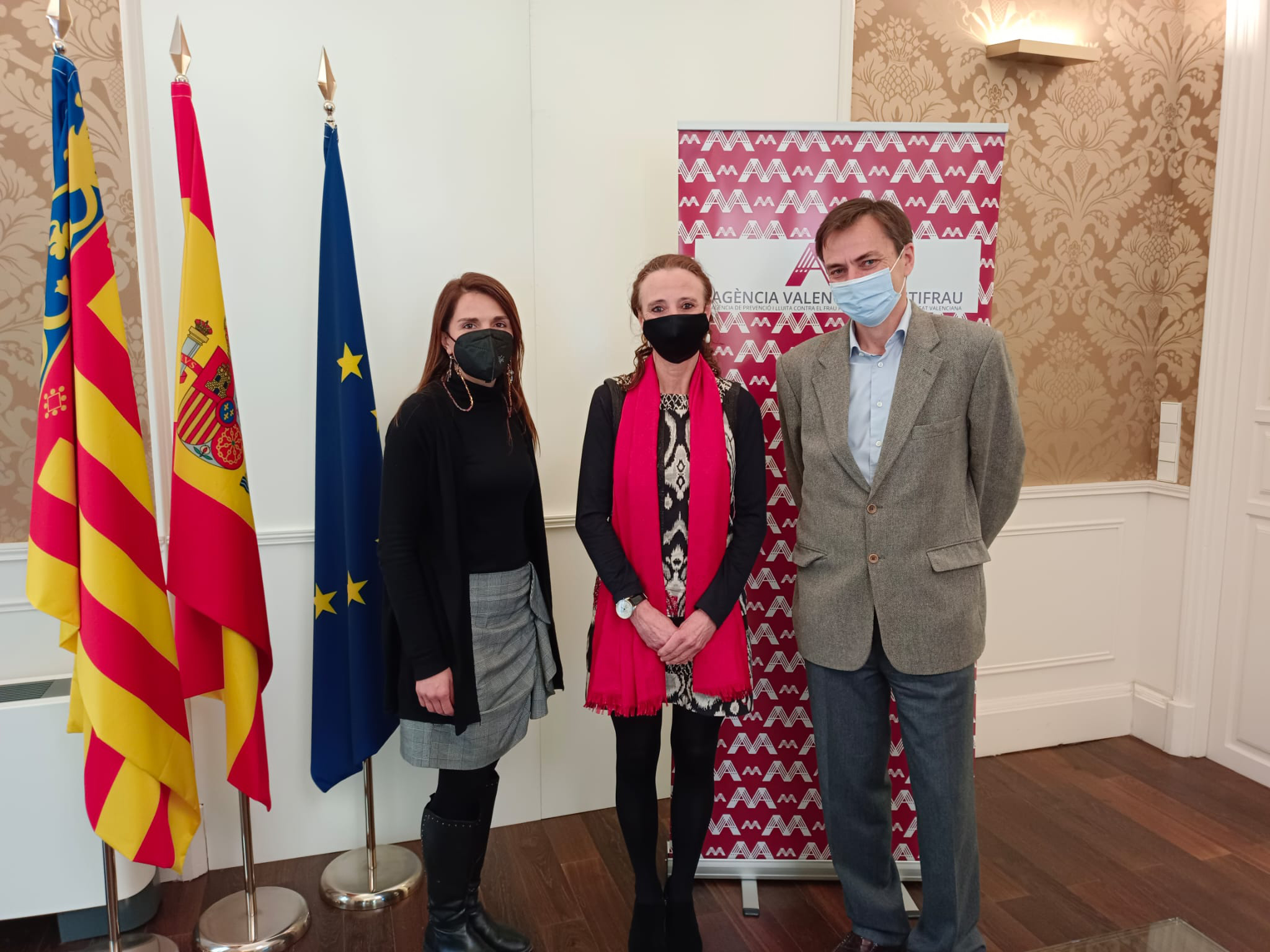 Valencia, March 22,  2022.- On February 10, 2022, the Valencian Anti-Fraud Agency approved the Code of Ethics and Conduct for its staff that includes the ethical principles and values of good governance that must inform all the actions of the Agency and will regulate the impartiality, confidentiality and conduct that must necessarily be observed by the staff, especially with regard to the conflict of interest.

Chapter IV of the Code provides for the establishment of an Ethics Committee to ensure the proper application of the Code and to help resolve all disputes that may arise. Once the people who will be part of this Ethics Committee were appointed, it was constituted last week.

The Committee is made up of two persons from outside the AVAF who have been appointed for a period of four years on the proposal of the AVAF Board of Directors. They are Antonio Penadés Chust and  Mª Luisa Cuerda Arnau.

For her part, Mª Luisa Cuerda Arnau is a professor of criminal law specializing in fundamental rights at the Jaume I University of Castellón.

The third member of the Ethics Committee who has been chosen from among the Agency’s own staff by vote is Amparo Martí Puertes, head of the Support and Expertise Unit.

With the appointments of these persons, article 6.3 is also complied with, which states that the Committee will be composed of a maximum of four people, three of them external from among professionals of recognized prestige in the field of the defense of public ethics, integrity and transparency, among which, at least one will be a jurist and another chosen among the staff of the Agency.

Among the functions of the Ethics Committee are to ensure compliance with the Code of Ethics and Conduct: to promote its dissemination and internalization by the beneficiaries; to inform about the doubts or queries that may arise in the cases of interpretation of the Code; to attend to the internal complaints referred to in the Code; to formulate recommendations on breaches of the Code or to prepare an annual report in which it is explained the degree of compliance with the Code.

The Code of Ethics is available on the Agency’s website and can be accessed via this link: