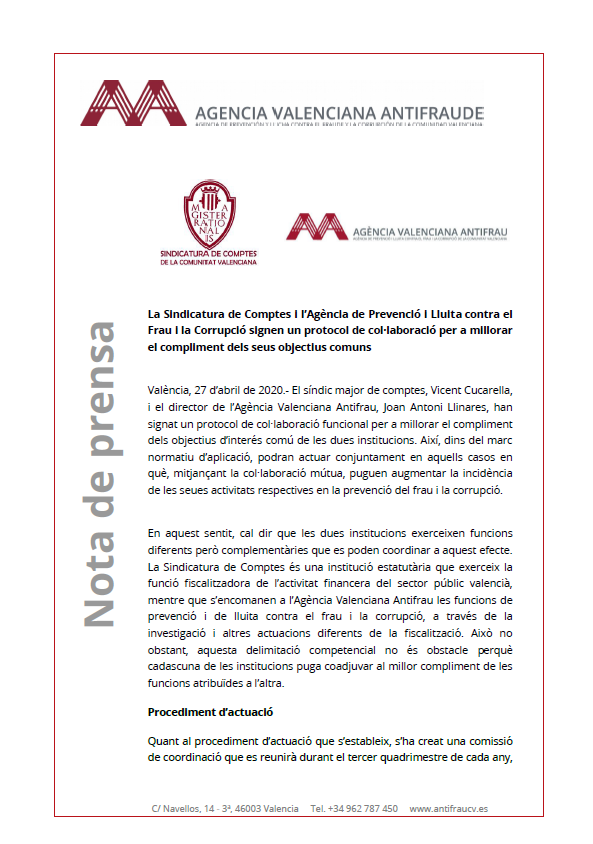 Valencia, April 27 2020.– The Catalan Ombudsman, Vicent Cucarella, and the director of the Valencian Antifrau Agency, Joan Antoni Llinares, have signed a functional collaboration protocol to improve compliance with the objectives of common interest of both institutions. Thus, within the regulatory framework of application, they may act jointly in those cases in which, through mutual collaboration, they can increase the incidence of their respective activities in the prevention of fraud and corruption.

In this sense, it must be said that the two institutions exercise different but complementary functions that can be coordinated for this purpose. The Comptes Sindicatura is a statutory institution that exercises the supervisory function of the financial activity of the Valencian public sector, while the Valencian Antifrau Agency is entrusted with the functions of prevention and fight against fraud and corruption, through investigation and other actions other than inspection. However, this delimitation of competence is not an obstacle for each of the institutions to contribute to the better fulfillment of the functions attributed to the other.

As for the action procedure that is established, a coordination committee has been created that will meet during the third four-month period of each year, in order to submit to the two institutions a joint proposal of certain actions to be carried out during the financial year. Next to improve fraud and corruption prevention.

By means of this protocol, the Comptes Syndicate may send to the Antifrau Agency the complaints it receives in which possible legal breaches are revealed, in order for it to carry out the appropriate investigations, all without prejudice to the audit function. of the Receivership and of the reports that, as a result of it, must be sent to the Court of Auditors and its Office of the Prosecutor. In addition, if the supervisory body is aware of the existence of people who denounce or report facts or behaviors that may constitute fraud or corruption and suffer reprisals as a result, it will notify the Agència Valenciana Antifrau of this circumstance so that this grants them, where appropriate, the protection that by law corresponds to them.

Satisfaction on both sides

The representatives of both institutions have been satisfied with this new path that they are undertaking together. As the Síndic Major de Comptes, Vicent Cucarella, has indicated, “this protocol shows an adequate collaboration between both institutions, already provided for in the respective laws and regulations, which benefits the public sector and the public.” For his part, the director of the Antifrau Agency, Joan Antoni Llinares, has pointed out in this regard: “The risks of corruption increase in times of crisis. Collaboration between institutions and control bodies is more essential than ever for the optimal management of situations as extraordinary as the ones we are experiencing. The fight against the Covid-19 pandemic can also be an opportunity to make a qualitative leap in integrity and good governance policies.”

In addition to the fraud and corruption prevention functions, this collaboration protocol will also serve to share knowledge and experiences in this area, to promote institutional integrity and transparency, as well as to share work methodologies. In this sense, the text also contemplates that training activities, internal and external, or any others that allow achieving objectives of common interest can be carried out jointly. 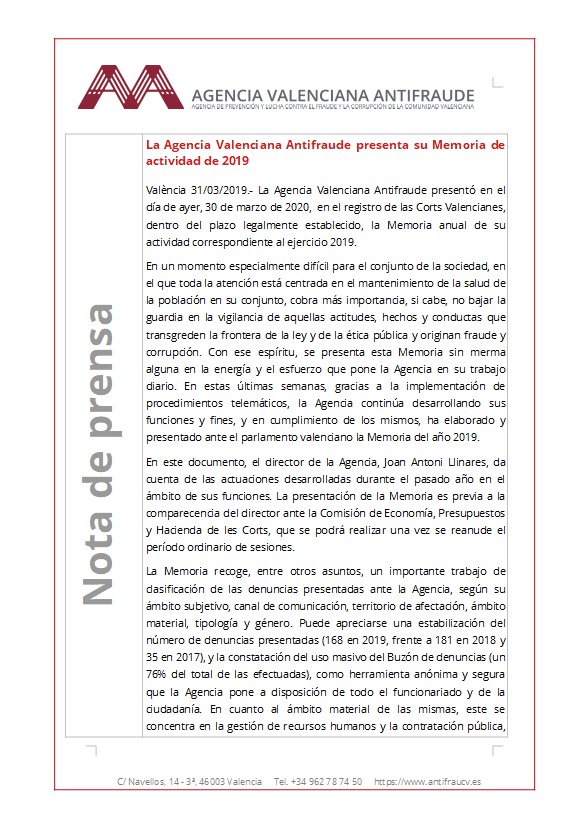 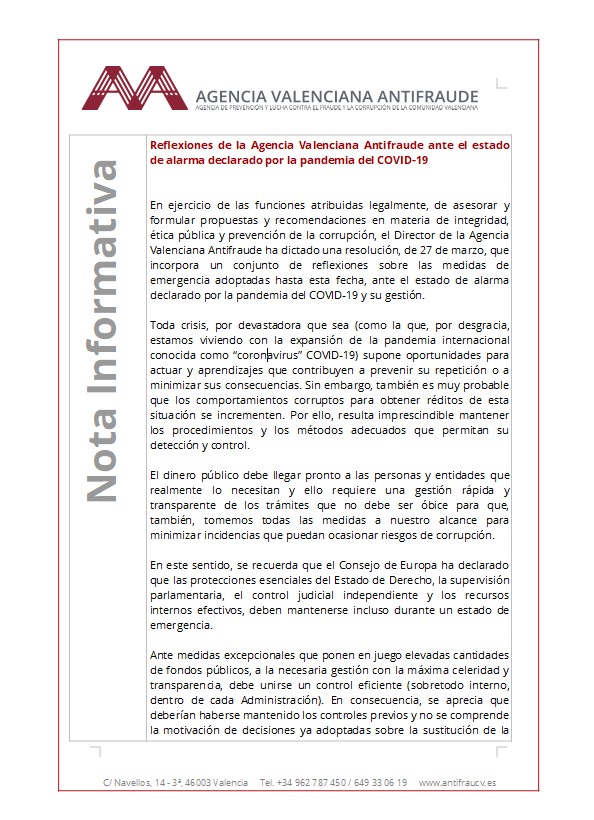