The Head of the Institutional Relations, Communication and Participation Unit of the Valencian Anti-Fraud Agency, Amalia López Acera, interviews Pilar Batet, Head of the Contracting Service of the Castelló Provincial Council. 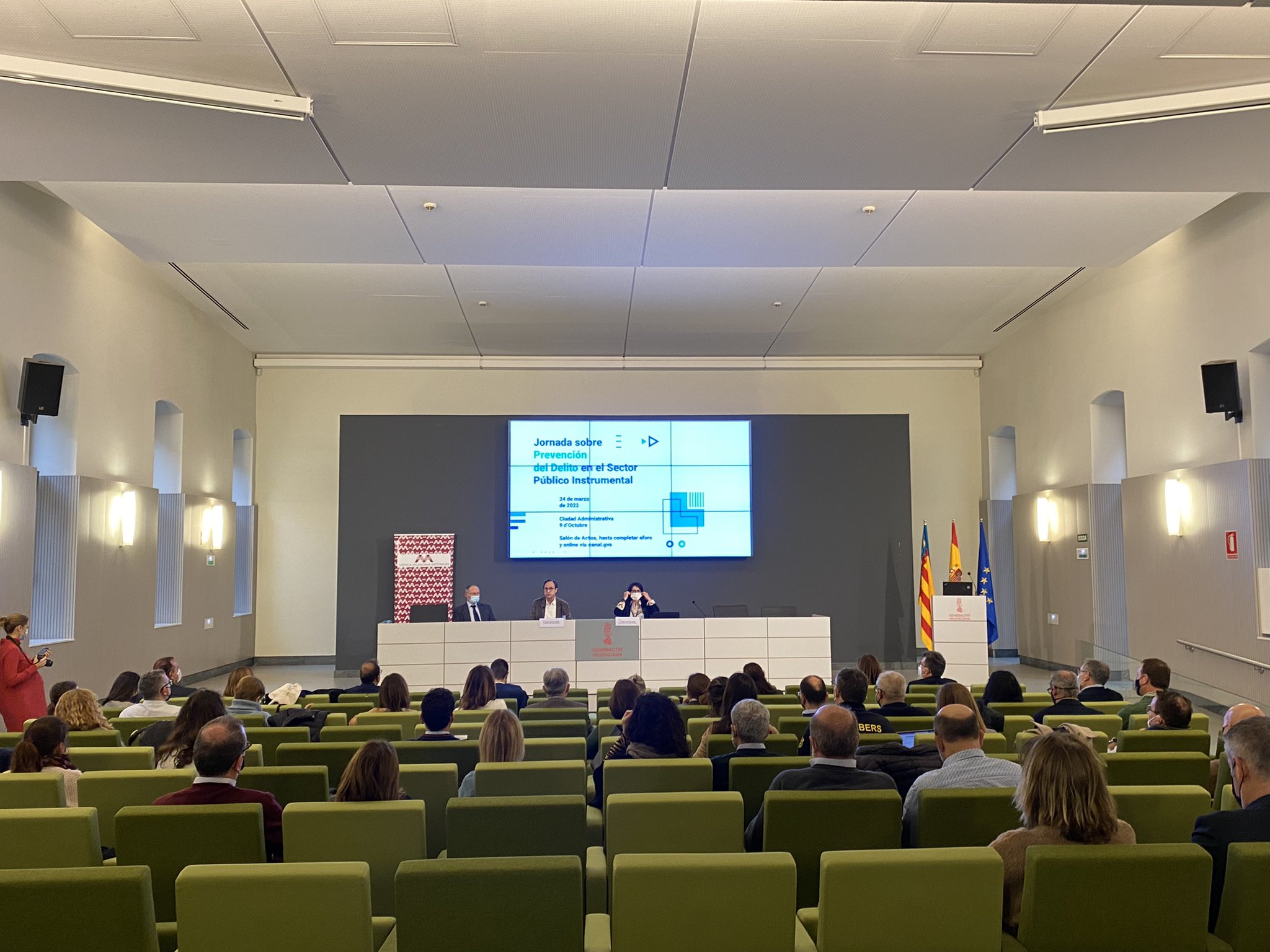 Institutional integrity and complaints mailboxes, the contributions of the AVAF, in the conference on “Crime prevention in the instrumental public sector” of the Ministry of Finance and Economic Model of the Generalitat Valenciana.

On Thursday, March 24, 2022, the Valencian Anti-Fraud Agency intervened in the conference organized by the General Directorate of the Public Sector that took place in the auditorium of the Administrative City 9 d’Octubre of València.

The day was followed by 70 people in person and more than 300 connected through the GVA channel.

AVAF’s interventions focused on the analysis of the legal framework in matters of public integrity by Irene Bravo, head of the Prevention Service, and the need to have general regulations for complaint mailboxes in public sector organizations, through the intervention of Gustavo Segura, Director of Analysis and Research of the Agency.

Irene Bravo detailed the obligations established for public administrations in Order HFP/1030/2021, of September 29, which configures the management system of the Recovery, Transformation and Resilience Plan, such as, for example, the declaration institutional, DACI, risk self-assessment, as well as the separation of management, control and payment functions.

In this sense, the AVAF advocates for the specific control of the management of public funds against any type of irregularity with the aim of protecting the public service mission of the public administration and for the development of fraud indicators and alerts, red flags, which act as a risk detection tool in organizations.

The benefits of integrity plans for the instrumental public sector were the subject of special attention, highlighting the need to detect the areas of activities and procedures likely to incur risks, and promote strategic planning practices, among others.

The content of the AVAF Guide was highlighted, aimed at building a public integrity system, reinforcing citizen trust, which goes beyond recommendations for proper management of European funds and is aimed at improving the integrity mechanisms of the Public Management.

Finally, Irene Bravo exposed some of the specific risks that can develop in the instrumental public sector in general and in terms of contracting, as well as in the management of human resources and subsidies.

In another order of things, the Director of Analysis and Investigation has focused his intervention on the complaint mailboxes and information systems, and has done so by comparing Directive 2019/1937 and the draft law approved by the Council of Ministers of the past March 4, 2022 by which the transposition of the same to the Spanish legal system begins.

The preliminary draft establishes the possibility of submitting anonymous communications, this being the highest level of protection that exists for the whistleblower/informant in terms of their identity (art. 7.3 APL).

The existence of a complaints mailbox is imperative for all public sector entities with their own legal personality. Among the issues of the bill, it is worth highlighting:

The conference aimed at the heads, managers and internal auditors of the organizations that make up the Valencian instrumental public sector, was inaugurated with the presence and interventions of the Minister of Finance and Economic Model, Vicent Soler, and were coordinated by Isabel Castelló, director General Public Sector and Heritage.

The session was closed by the director of the Agency, Joan Llinares, who thanked all the interventions in the morning and their importance in advancing prevention measures in such important matters as cybersecurity, labor regulations, the fight against corruption through public integrity and complaint mailboxes. 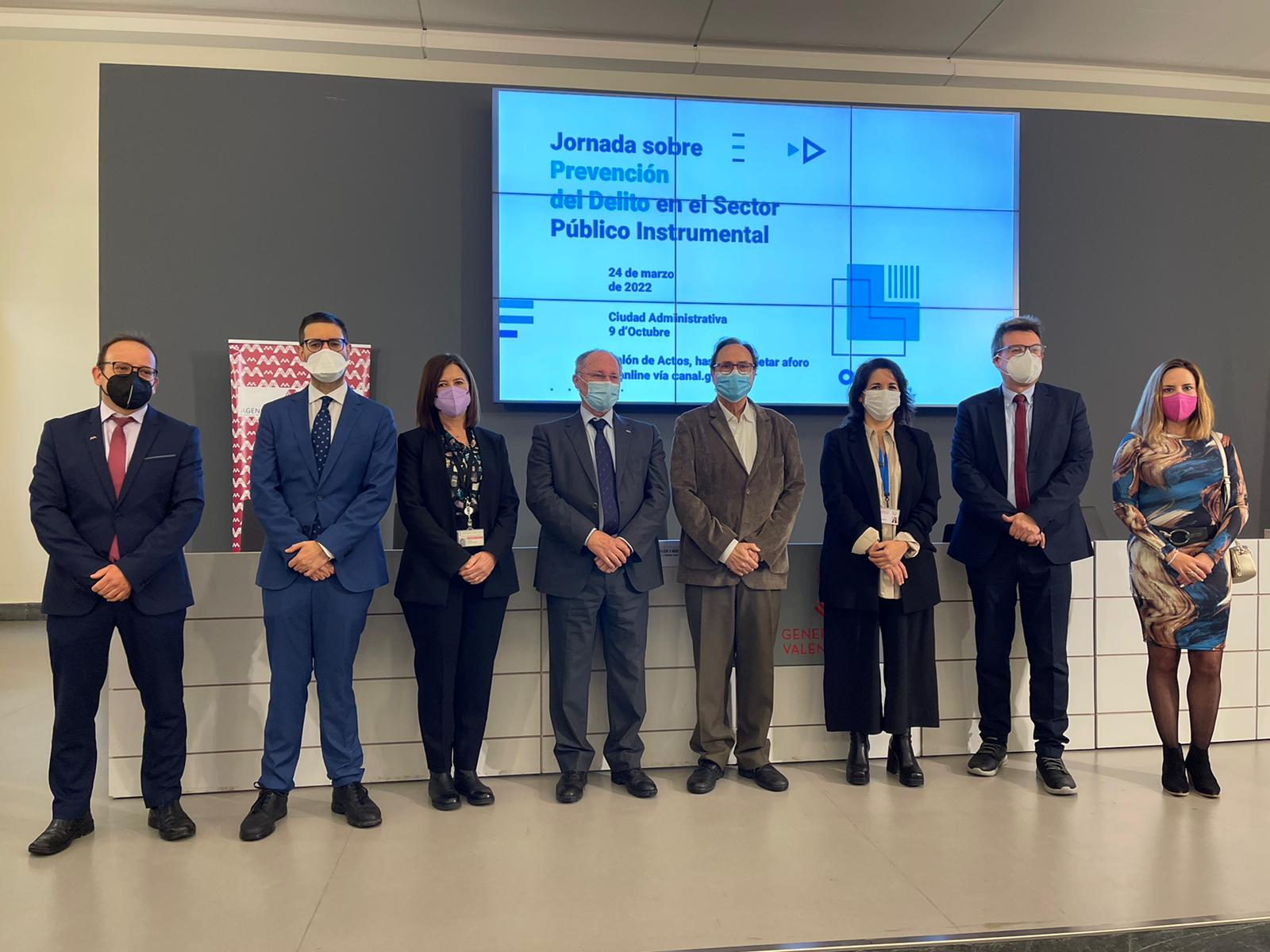 Valencia, March 24, 2022.- The Valencian Anti-Fraud Agency participated on March 24 in the Conference on “Prevention of crime in the instrumental public sector” organized by the Conselleria d’Hisenda de la Generalitat Valenciana.

The day had experts in the legal field, integrity and cybersecurity was followed by more than 70 people in person and by another 300 did it virtually.

The day was inaugurated by the Minister of Finance and Economic Model, Vicent Soler and Isabel Castelló, general director of Public Sector and Heritage of the Generalitat Valenciana. The first of the interventions was carried out by José Manuel García Duarte, general director of Information and Communications Technologies and Carmen Serrano Durbá, general subdirectorate of Cybersecurity who addressed the novelties in cybersecurity in a high-risk context such as the current one, as well as the professionalization in which cyberthreats have evolved.

Adrián Todolí, professor of labour law and social security at the University of Valencia, in his speech analysed the latest changes in labour regulations from the perspective of public and private law.

On behalf of the Valencian Anti-Fraud Agency, the head of the Prevention Service, Irene Bravo, participated, who explained the benefits of integrity plans for the instrumental public sector since it allows detecting risks and implementing strategic planning. He also released the Guide that the Agency has prepared along with other materials to help public institutions develop their public integrity plans.

The Director of Analysis and Investigation of the Agency, Gustavo Segura, also participated in the conference, who spoke about the complaint mailboxes, as well as the possibility of presenting anonymous complaints, as one of the most effective instruments in the fight against fraud and corruption.

The director of the Valencian Anti-Fraud Agency, Joan Llinares, was in charge of the closing of the day and pointed out that “the organization of this type of conference in collaboration with other institutions, such as in this case with the Conselleria d’Hisenda, allow us to find spaces to debate and reflect on the importance that ethics and public integrity have in the work carried out in our public administrations”.

“The existence of complaints boxes where people can warn about actions constituting fraud and corruption, and the adoption of prevention mechanisms so that they do not occur, are the pillars where this framework of public integrity should be based,” Llinares added.