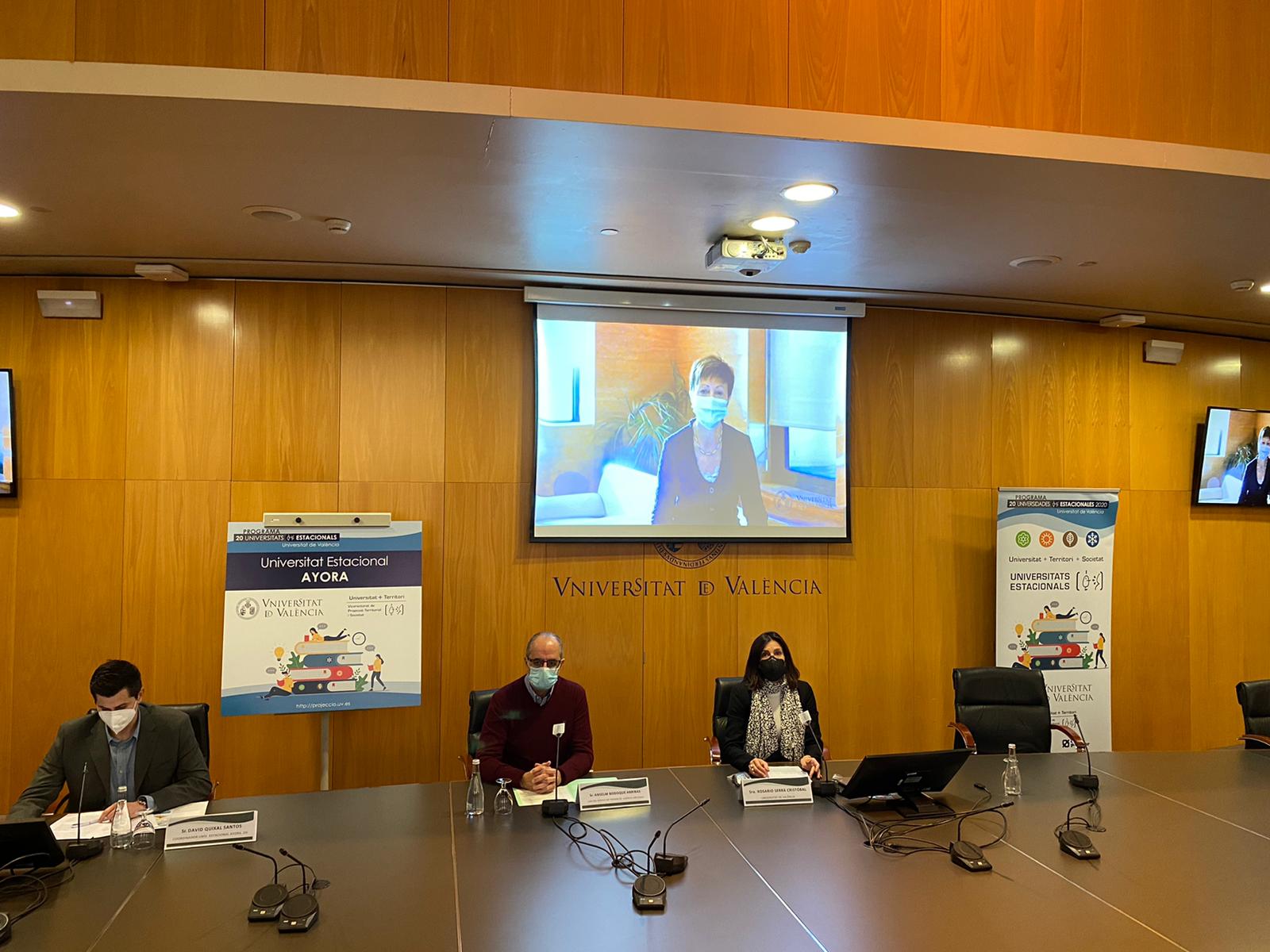 On December 16, the Rector’s Office of the University of Valencia hosted the celebration of the Seasonal University of Ayora. A telematic broadcast for the health situation that had the sponsorship and participation of the Valencian Anti-Fraud Agency.

Anselm Bodoque Arribas, head of the training service of the Valencian Anti-Fraud Agency, was in charge of presenting the conference sponsored by the AVAF and given by UV teachers, within the framework of the project ‘Activities for good government and citizenship in the Valencian territory ‘.

At the Ayora Seasonal University, a town famous for its beekeeping tradition and for the celebration of the First Honey Cut, the origin and historical evolution of the beekeeping practice was analyzed, paying special attention to the Valencian territory. In the same way, the current panorama of the sector and the challenges of the immediate future were discussed. 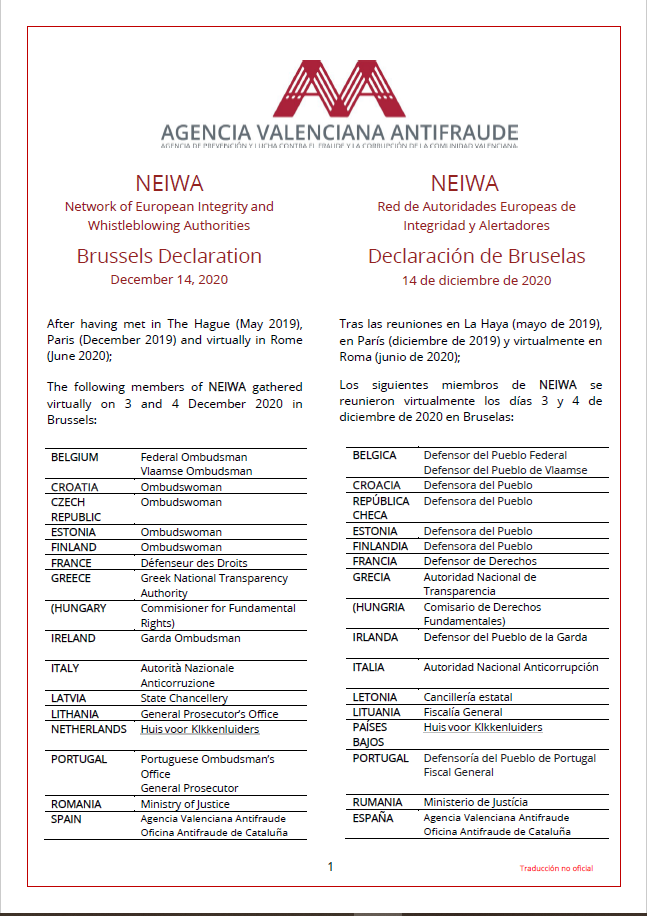 Valencia, December 16, 2020.- The European Network of Integrity Authorities and Alerters (NEIWA) has approved the Brussels Declaration after the meetings held electronically on December 3 and 4, which should have been held in this European city as planned but this has been impossible due to the pandemic situation.

In this new Declaration, the Network focuses on the fact that this November 17, 2020 marks one year of the entry into force of Directive (EU) 2019/1937 of the European Parliament and of the Council of October 23 of 2019, on the protection of people who report infringements of Union law, better known as the Whistleblowers Directive.

This Directive has a period of two years for its transposition into the legal systems of each country and in this first year the Neiwa Network has verified that while there are States that carry out the work well advanced, there are others that are in the preliminary stage of the process. transposition.

This is the case of Spain, since at the moment none of the legislative proposals presented in the Congress of Deputies by the parliamentary groups have been successful, and although the Ministry of Justice announced in June of this year the designation of a group of work for the drafting of a proposal, as contained in the IV Open Government Plan of Spain 2020-2024, the calendar of procedures for the approval of the Draft Law will not conclude before December 31, 2021, and this without counting the subsequent processing in the Congress of Deputies.

Faced with this situation, the NEIWA Network has approved the Brussels Declaration with a set of recommendations addressed to governments, administrations and interested parties in the implementation of the Directive, such as urging “urgently to initiate or accelerate the transposition process to comply with the deadline established on December 17, 2021 ”.

Likewise, the Network recommends that the States take advantage of the opportunity to build a comprehensive complaints system throughout the national territory, in which the internal complaint channels and the independent external competent authorities function in accordance with their respective territorial or material competencies, and coordinate with each other to ensure effective and consistent mechanisms in the fight against corruption.

The NEIWA Network currently represents 21 Member States and was created in May 2019 to provide a platform for cooperation and exchange of knowledge and experiences in the field of integrity and whistleblowing. In the case of Spain, there is no national authority that can be part of NEIWA as long as Directive (EU) 2019/1937 is not transposed. However, two competent authorities at the territorial level, the Catalonia Anti-Fraud Office and the Valencian Anti-Fraud Agency, are present at its meetings as full members. 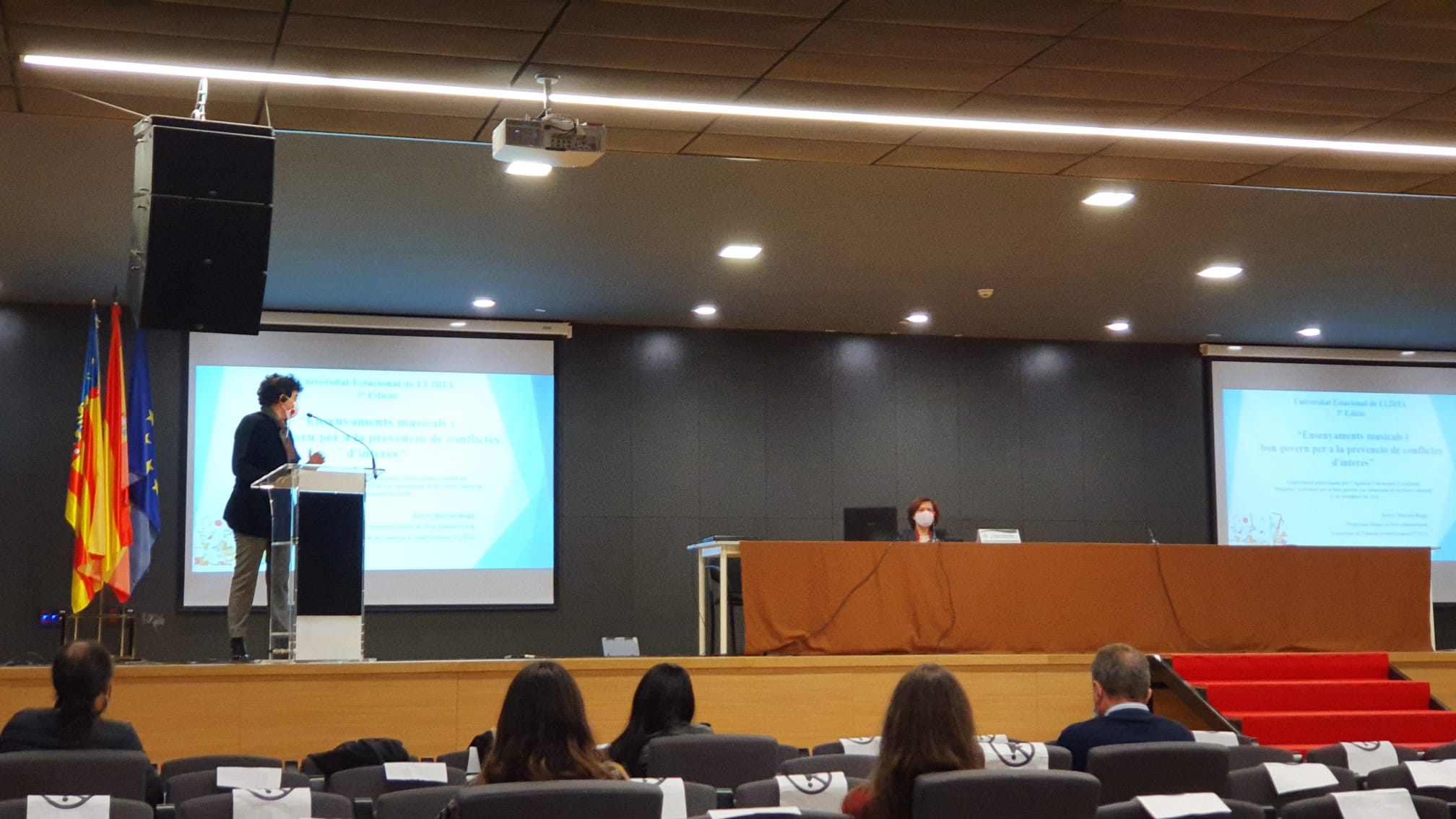 On December 11, Llíria, capital of the Camp de Túria region, hosted the third edition of the Seasonal University at the Multi-purpose Center of the town. Organized by the University of Valencia, this program is presented and sponsored by the Valencian Anti-Fraud Agency.

The Seasonal University of Llíria, which is part of the area of ​​‘Historical and Cultural Heritage’, addressed under the title ‘Music as an interdisciplinary educational instrument’, the educational possibilities of music in schools and secondary schools. A theme followed with enthusiasm in the so-called “Ciutat de la Música”.

On this occasion, the conference was presented by Silvia Vèrnia, Director of the AVAF Training and Prevention Area, and was also attended by the Mayor of Llíria, Manuel Civera, along with representatives of the University of Valencia.

The Seasonal University provides an open space for debate and knowledge transfer. An initiative that is consolidated year after year and that shows the interest of citizens to approach the musical art from the multiple perspectives that it offers.