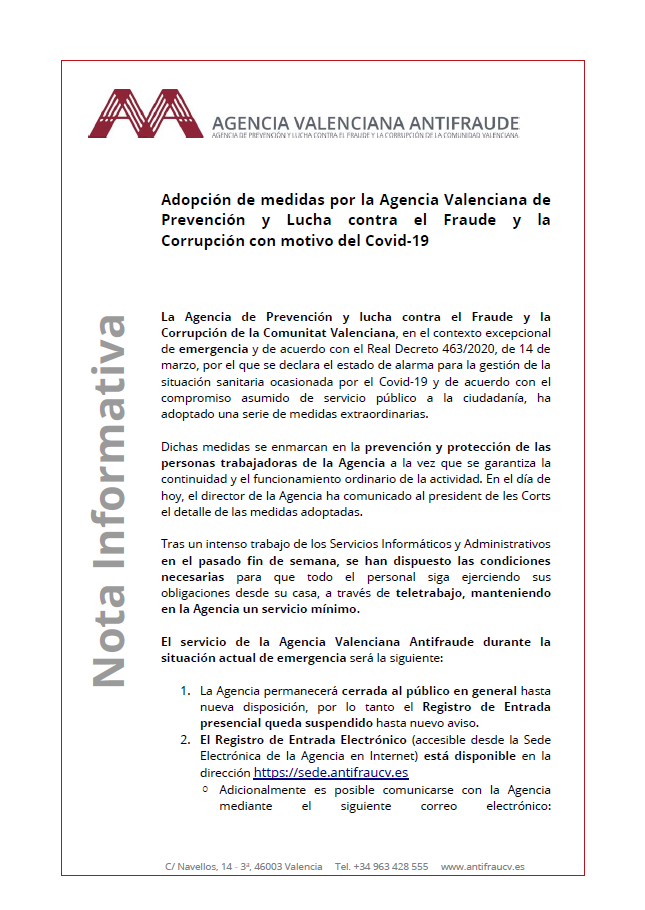 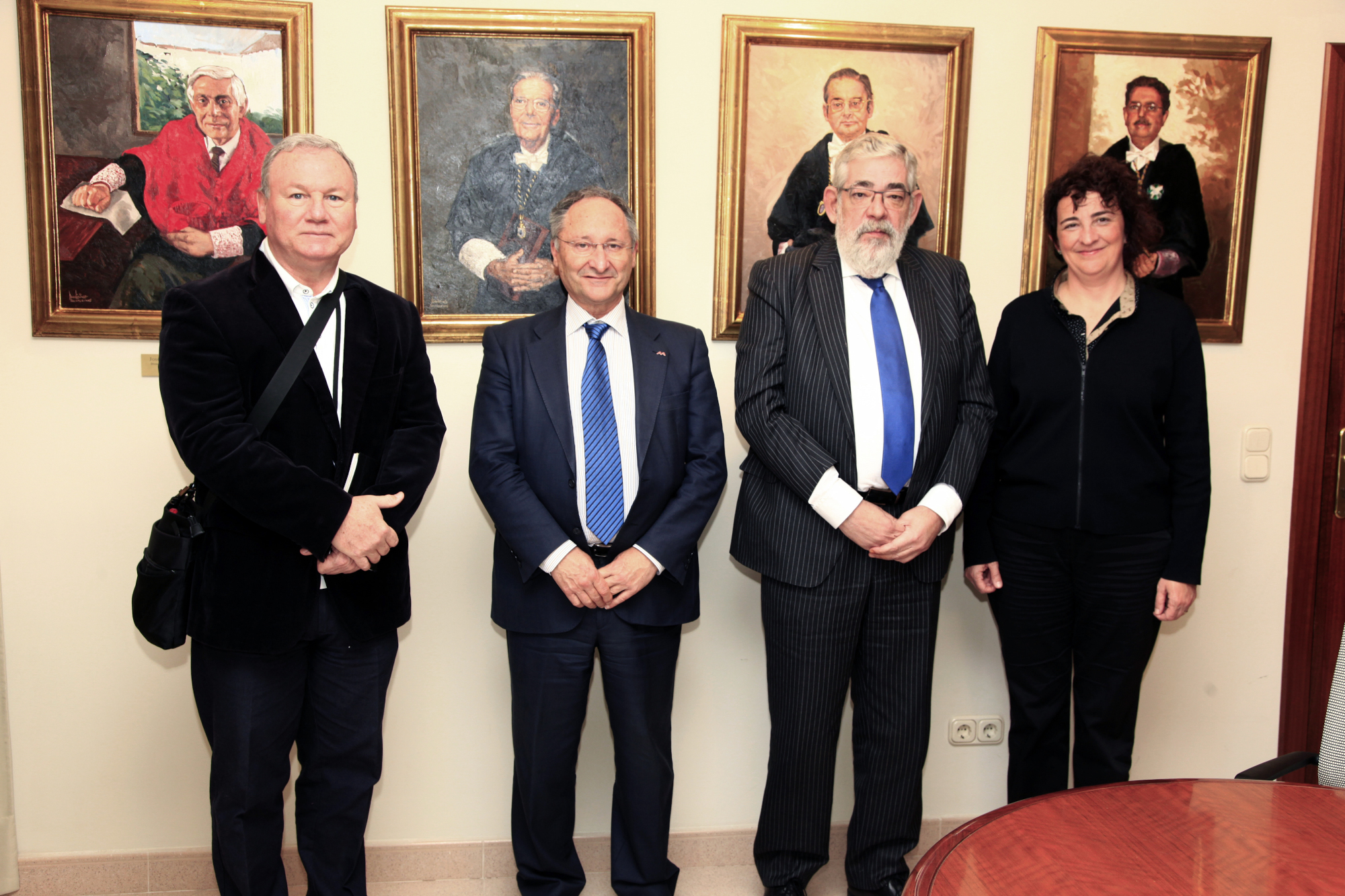 The director of the Agència Valenciana Antifrau (AVA), Joan Llinares, and the rector of the CEU Cardenal Herrera University, Vicente Navarro de Luján, sign an agreement for collaboration in training and research

The Agència Valenciana Antifrau (AVA) and the CEU Cardenal Herrera University have formalized a joint institutional collaboration agreement. Through the CEU UCH Transparency, Governance and CSR Observatory and the Agency’s Prevention, Training and Documentation Directorate, both entities will promote research and training on transparency in public administration. The director of the AVA, Joan Llinares, and the rector of the CEU UCH, Vicente Navarro de Luján, have signed the agreement.

Both entities have already carried out various joint activities to promote institutional transparency, such as the meeting of researchers held in December at the Palacio de Colomina-CEU, to analyze the new challenges in transparency, six years after the approval of the state law in this matter. The CEU UCH Transparency, Governance and CSR Observatory and the UAB Plural Citizenship Laboratory led this focus group, in which the main public agents in the area of ​​transparency in the Valencian Community participated, with the collaboration of the AVA , such as the Department of Participation, Transparency, Cooperation and Democratic Quality, the Provincial Councils of Valencia and Castellón and the municipalities of Valencia, Alicante, Onda, Nules, Alzira and Cartagena.

In the field of university education in this area, the AVA held this November at the CEU UCH the document «A look to the future. Exemplarity and transparency: tools for the prevention of corruption », with the screening of the documentary” Corruption: the harmful organism “, which raises the need to recognize the complaint of corruption and protect the people who evidence it, against the passivity of the governments and the lack of visibility in the media. 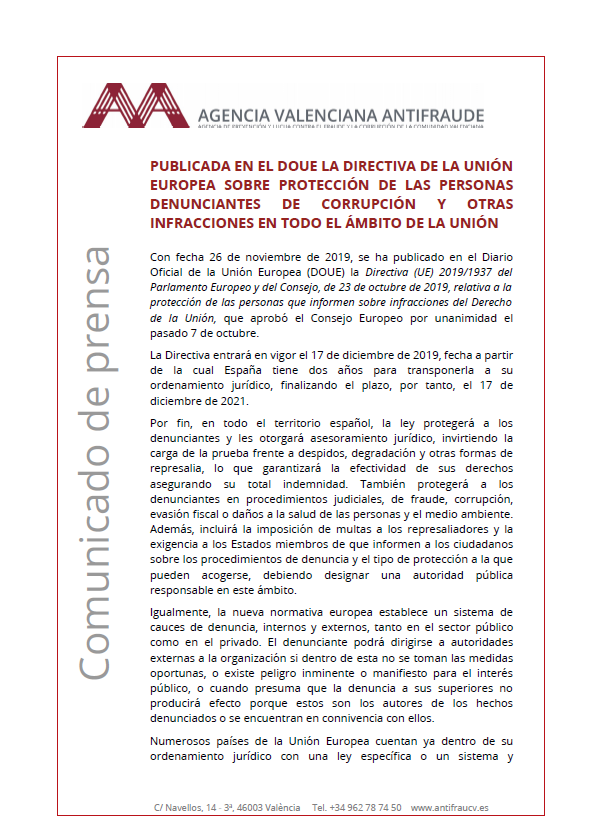 On November 26, 2019, the Directive (EU) 2019/1937 of the European Parliament and of the Council, of October 23, 2019, on the protection of the people who report infringements of Union law, which was unanimously approved by the European Council on October 7.
The Directive will enter into force on December 17, 2019, date from which Spain has two years to transpose it into its legal system, ending the term, therefore, on December 17, 2021.
Finally, throughout the Spanish territory, the law will protect the complainants and provide them with legal advice, reversing the burden of proof against dismissals, demotion and other forms of retaliation, which will guarantee the effectiveness of their rights ensuring their full indemnity. . It will also protect whistleblowers in legal proceedings, from fraud, corruption, tax evasion or damage to the health of people and the environment. In addition, it will include the imposition of fines on retaliators and the requirement that member states inform citizens about the complaint procedures and the type of protection they can avail of, and must designate a public authority responsible in this area.
Likewise, the new European regulations establish a system of internal and external reporting channels, both in the public and private sectors. The complainant may contact authorities outside the organization if the appropriate measures are not taken within the organization, or there is an imminent or manifest danger to the public interest, or when he presumes that the complaint to his superiors will have no effect because they are the authors of the facts reported or are in collusion with them.
Many countries of the European Union already have within their legal system a specific law or a system and tools to protect whistleblowers. Thus, among others, Belgium, Holland, United Kingdom, Ireland, Sweden, Greece, Hungary, Lithuania, Luxembourg, Malta, Slovakia or Romania.
Italy and France created their own national authorities against corruption and whistleblower protection, respectively, through laws of 2012 and 2016. These are institutions that act with full organic and functional independence from public administrations in the exercise of their functions, to which is attributed its own legal personality and full capacity to act for the fulfillment of its purposes, at the head of which is a president who is elected by the legislative body.

THE VALENCIAN COMMUNITY ADVANCES THE EUROPEAN DIRECTIVE
The Valencian Community anticipated the European Directive and the Spanish State itself, with the approval and entry into force of Law 11/2016, of November 28, of the Generalitat, of the Agency for the Prevention and Fight against Fraud and the Corruption, issued in compliance with the 2003 United Nations Convention; international convention that, despite having been ratified by the Spanish State and being part of our legal system since its publication in the Official State Gazette in 2006, has been inapplicable.
The Valencian Anti-Fraud Agency is the institution responsible in the Valencian Community for the protection and assistance to people who report corruption, endowed with sanctioning power to impose fines, ranging between 200 and 400,000 euros, to those who disturb their working life or whistleblowers, or hinder the Agency’s tasks.
Since the beginning of its activity in the second half of 2017, the Agency has protected nineteen whistleblowers; most of them public officials, whose complaints have led to the opening of criminal judicial proceedings that are in process.
In addition, the Agency carries out functions of investigation of complaints, as well as prevention, training and awareness-raising in integrity and public ethics, in matters of public procurement and concessions, access and provision of public employment, subsidies, urban planning or public assets, derived from the action of the public administrations of our territory (autonomous and local), and its public sector, contractors, concessionaires, recipients of subsidies and of any entity, even private, that receives public funds or is subject to the decision-making power of public administrations.
The Valencian Community, endowed with legislation that is even more advanced than the Directive itself, is the only one in the entire Spanish territory that grants protection status to persons, natural or legal, who denounce acts or conduct, presumably fraudulent or corrupt, that may give rise to the requirement of legal responsibilities, whether the complaint is filed with the Agency itself or any other administrative body, or with the Public Prosecutor’s Office or the judicial authority. For these purposes, the complainants are assimilated, all those who alert or reveal information of this type, as well as the witnesses and experts, and the relatives and people around them if they suffer risk of retaliation or threat as a result of the information. provided.

THE SECURE AND CONFIDENTIAL COMPLAINT BOX
Since May 2018, the Agency has made a secure and confidential complaints mailbox available to the public, which admits anonymous complaints, so that those who have knowledge of this type of facts or conduct, communicate it in order to proceed with your analysis and research. This mailbox also operates as a virtual portal for the public official. The mailbox can be accessed through the Agency’s own web portal www.antifraucv.es.
However, complaints can also be made by email, by regular mail or in person at the Agency’s offices at Calle Navellos, no. 14, pta. 3, of València, CP 46003.
Finally, it should be noted that the implementation of the Directive will result in important reforms in our legal system: It will not only require the approval of a specific law to fight corruption and its harmonization with regional legislation, in order to coordinate and cooperate with the structures that are in operation, but also the revision of the Organic Law for the protection of witnesses and experts in criminal cases, the Penal Code, the General Penitentiary Organic Law, the Criminal Procedure Law, and numerous regulatory norms of the sector private and certain areas of the public sector (regulations on competition, consumption, public health, food safety, transport security, money laundering, terrorism, personal data, etc.).

DECEMBER 9, UNITED NATIONS INTERNATIONAL DAY AGAINST CORRUPTION
The Valencian Antifraud Agency organizes a Conference on the recently published European Directive on December 9; the day the United Nations celebrates the International Day Against Corruption under the slogan “United against corruption for development, peace and security”.
The Conference, in the afternoon session, will take place in the Assembly Hall of the University-Business Foundation of the University of Valencia (ADEIT), located in Plaza Virgen de la Paz, no. 3 of Valencia, based on a presentation about the meaning of December 9, as the United Nations International Day against Corruption, two conferences and a final debate.
The objective of this session, which will run from 3:30 p.m. to 8:00 p.m., is to publicize the main novelties of the new European framework in terms of protection to people who report or warn of facts or conduct that may be considered fraud , corruption or contrary to the public interest, and analyze the role of recent Anti-Fraud Agencies in this matter and in the establishment of secure channels for receiving complaints.
The Conference is aimed at personnel at the service of all public administrations and their related public sector, as well as their authorities or representatives, elected and unelected positions. It also targets the general public who may be interested in your content.
Registration for this Conference will be made by request sent to the email address gabinete@antifraucv.es. with personal data (name and surname), contact email address, and where appropriate, entity and position or position where services are provided. Said registration will give the right to attendance until the capacity is covered and to the issuance of an attendance certificate to those who request it.

Link to the Press Note