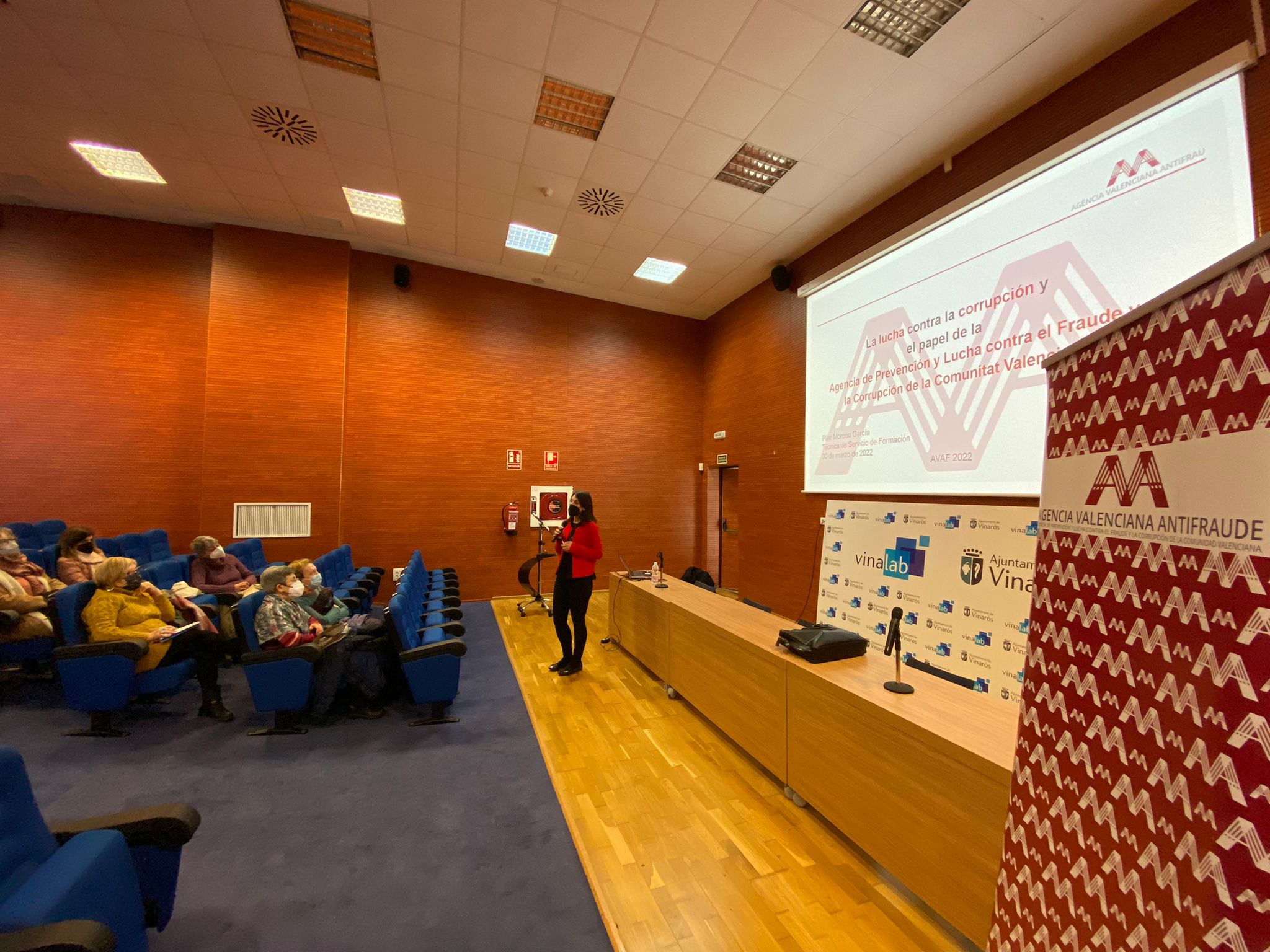 On March 30, the AVAF was present, for the first time, at the Universitat per a Majors of the Universitat Jaume I of Castelló. This first training activity took place in the Seu del Nord de Vinaròs.

“The fight against corruption and the role of the Valencian Anti-Fraud Agency” was the title of the conference, given by Pilar Moreno, AVAF training technician.

After a brief introduction on the international context of corruption prevention, the representative of the Agency had the opportunity to convey the functions and work of the Agency in areas such as whistleblower protection and the analysis and investigation of fraud alerts.

The Universitat per Majors is a project of the Universitat Jaume I of Castellón to bring knowledge closer to society, with the aim of promoting permanent training throughout life.

The participation of the Valencian Antifraud Agency in this session of the UJI Majors has been possible thanks to the collaborative relationship with the Universitat Jaume I, committed to the values ​​of ethics and good governance. The conference was held within the subject “Basic Notions of Local Law for Citizens” taught by university professor Jaime Clemente, belonging to the Observatory of Transparency and Good Governance of the UJI.

The session, in which the documentary “Corruption: Harmful Organism” was also viewed, was attended by nearly 20 people from the Universitat per a Majors. The figure of local government officials with national qualifications, as well as the regulation of gifts, were the aspects in which the UJI Majors students were most interested.

The AVAF, with this activity, continues to develop training activities with the aim of offering knowledge and raising awareness among citizens about the necessary culture of prevention and rejection of any conduct that encourages corruption. 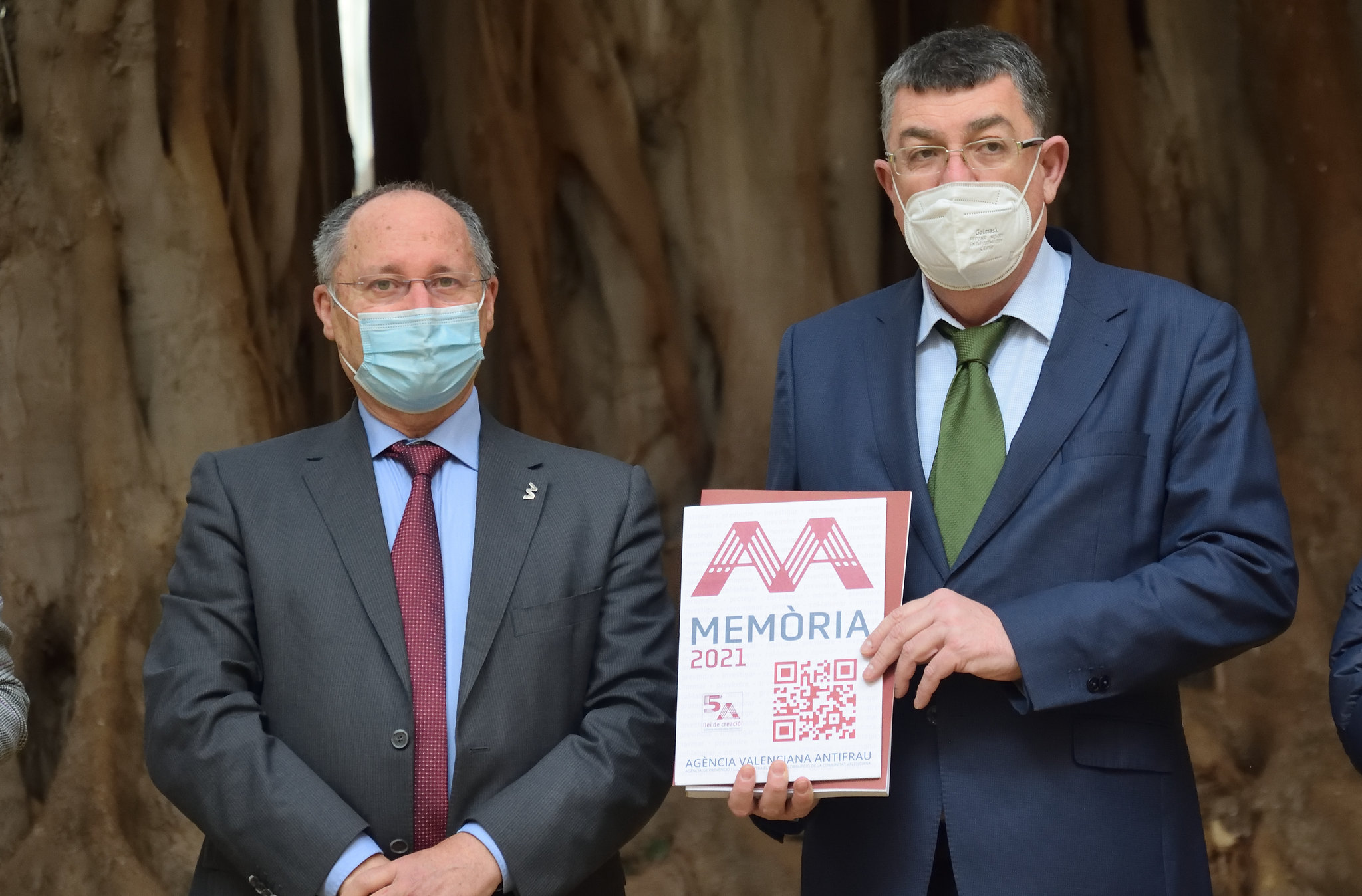 Valencia, March 29,  2022.- The Valencian Anti-Fraud Agency has presented to the Mesa de Les Corts its Activity Report corresponding to the year 2021, thus complying with the mandate contained in article 22 of Law 11/2016 on the creation of the Agency.

On this occasion the Activity Report has been delivered through a QR code from which you can easily download the document. In this way, the AVAF contributes to the reduction of paper consumption and economic expenditure by adhering to the 2030 sustainability commitments.

The Report includes the activity carried out by the Agency in 2021 in the area of training, prevention and documentation; the legal and protection area of the complainant; analysis and research; administration, recruitment and human resources and communication.

After the act of delivery of the Report, the director of the AVAF, Joan Llinares, attended the media and highlighted some of the most relevant aspects included in the Report.

During 2021, the Agency has received 359 complaints, mainly through its Complaints Mailbox, which represents 58% more complaints compared to 2020. Since its creation in 2017, the Agency has opened a total of 969 investigation files.

A fact to highlight from the work carried out by the Agency is that it has determined that the amount recoverable by Valencian public institutions as a result of the investigations completed by the Agency in 2021 exceeds 23 million euros.

With regard to the training activity in 2021, the Agency has organized 43 training actions in which more than 1,800 people have participated, which has meant a considerable increase in relation to the 23 activities organized and the 827 people who participated in 2020.

It is also worth mentioning the elaboration during the year 2021 of a Guide along with various materials to help public institutions  develop their public integrity plans in accordance with the requirements of the Next Generation funds. The Agency also approved its Code of Ethics and Conduct and constituted its Ethics Committee.

The director of the Agency, Joan Llinares, has stated that “this Activity Report includes all the work done by the AVAF staff in their different areas during the year 2021, an especially significant year in which we have celebrated the 5th anniversary of the approval of the Law of creation of the Agency”.

“With the presentation of this Report to Les Corts, the Agency complies with this requirement and from this moment the document is available to all citizens on our website so that they can learn in more detail about the work we do in the fight against fraud and corruption and in the creation of ethics and public integrity,” added Llinares. 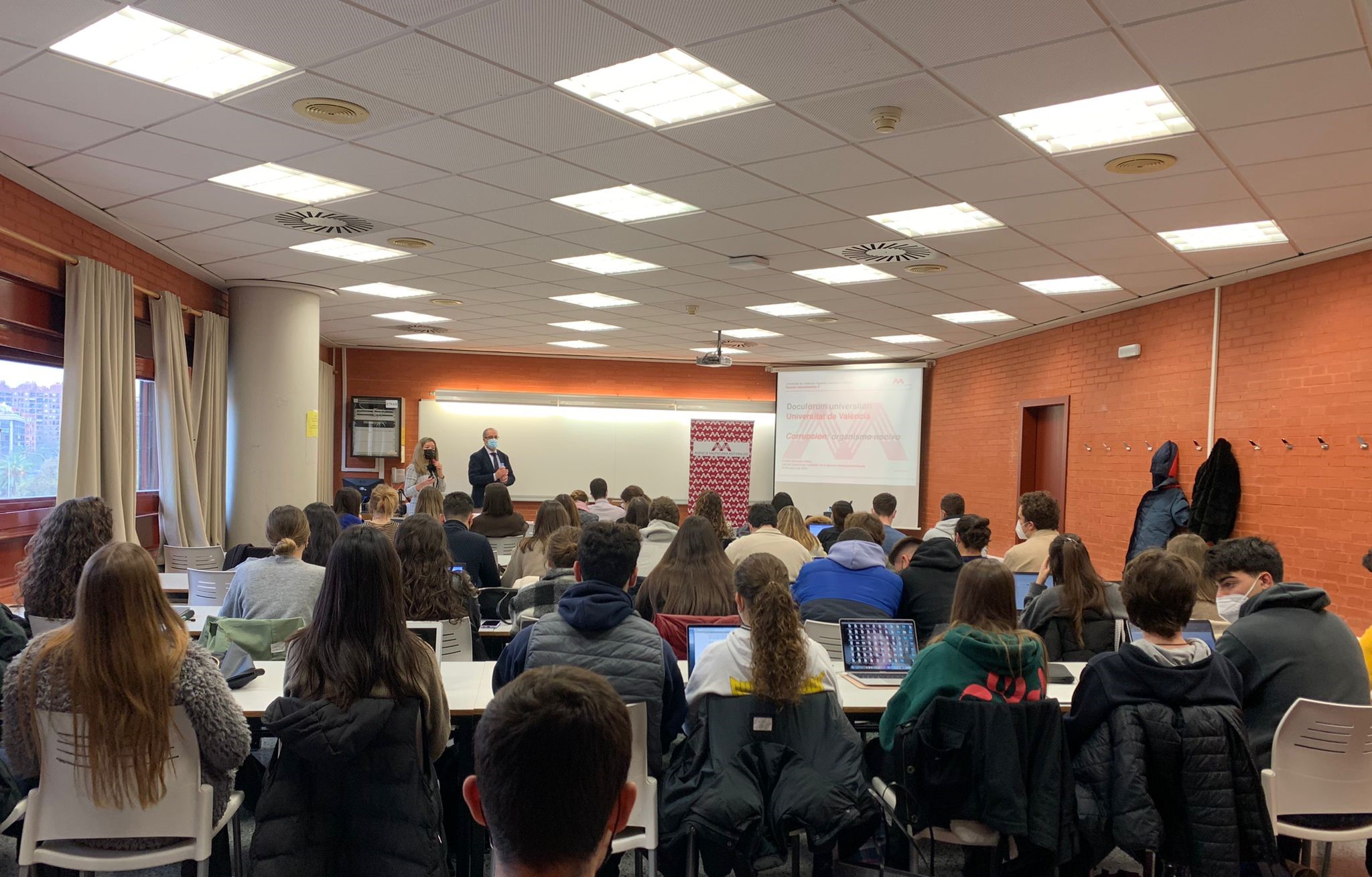 The protection of AVAF whistleblowers among the issues of most interest to university students in the docuforum held at the University of Valencia.

On March 28, the training activity took place in the subject of Administrative Law II, in the third year of the Law degree, thanks to the collaboration of Professor Ylenia Díaz.

The Valencian Anti-Fraud Agency continues the activity of the University Docuforum in Valencian universities with the aim of bringing the debate on the importance of the fight against fraud and corruption closer to university students and empowering them to become protagonists in the eradication of this scourge of democracy.

The students asked more than forty questions and reflections of their own, after viewing the documentary “Corruption: harmful organism” that were answered during the training activity, by Anselm Bodoque, head of the AVAF Training Service.

The absence of a public state agency similar to the AVAF and the lack of policies against corruption in Spain as a whole similar to those developed in the Valencian Community in recent years, have been some of the issues that have most concerned the students; as well as the mechanisms for the protection of whistleblowers.

The students have also shown a special interest in knowing the work of the public servants of the local administration with national authorization and how they could help reduce bad practices in management, fraud and corruption. The technicians of the Agency’s Prevention Service, Carmen Domínguez and Mayte Gascó, explained the daily work and the main difficulties of the people who occupy this type of job and the value of their work in defending public integrity and the general interest.

Youth, who are undergoing a specialized training process and are called upon to occupy responsibilities in public management and in society, have a decisive value in building a strong culture of public ethics and integrity.

If you are a university, secondary or high school teacher and you are interested in having the Docuforum AVAF training activity carried out in your subject, do not hesitate to contact the Training Service of the Valencian Antifraud Agency through formacion@antifraucv.es