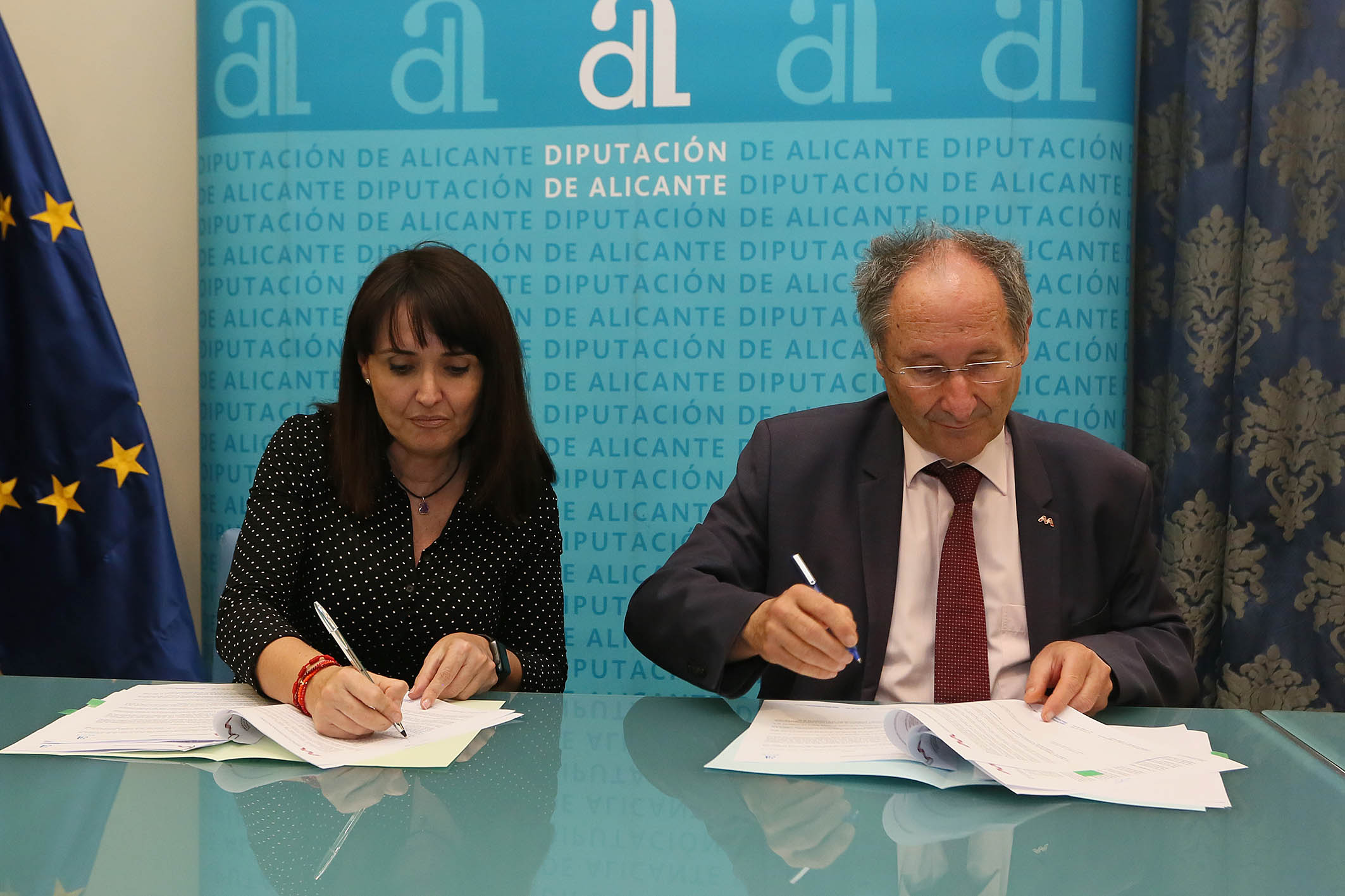 Alicante. May 24, 2022.- The Alicante Provincial Council and the Agency have signed a collaboration protocol with which the development of joint projects begins. The document has been signed by the first vice president and deputy for the transparency area, Julia Parra, and the director of AVAF, Joan Llinares.

The first action to be implemented as a result of this protocol will be to set up an external complaints mailbox that could be operational within two months. Work has already begun on this new resource that will be accessible from the Diputación’s electronic headquarters and also through the Transparency Portal (https://abierta.diputacionalicante.es/).

This tool is mainly aimed at the strategic areas of hiring, subsidies and access to the public function, which includes different profiles such as contractors, applicants for public aid or participants in personnel selection processes. The channel complies with the new applicable regulations and will allow any third party, and also any employee, to file complaints with guarantees and while maintaining their anonymity, so that an impartial body can resolve their claim.

In a later phase, the Diputación’s Transparency area will implement the internal complaints channel, for which collaboration with AVAF will also be sought. This second initiative, which will be put into operation next year, is aimed at Provincial Council employees with the aim of implementing mechanisms to guarantee public integrity. It is also planned to develop other projects such as a code of ethics for the staff of the Provincial Council. 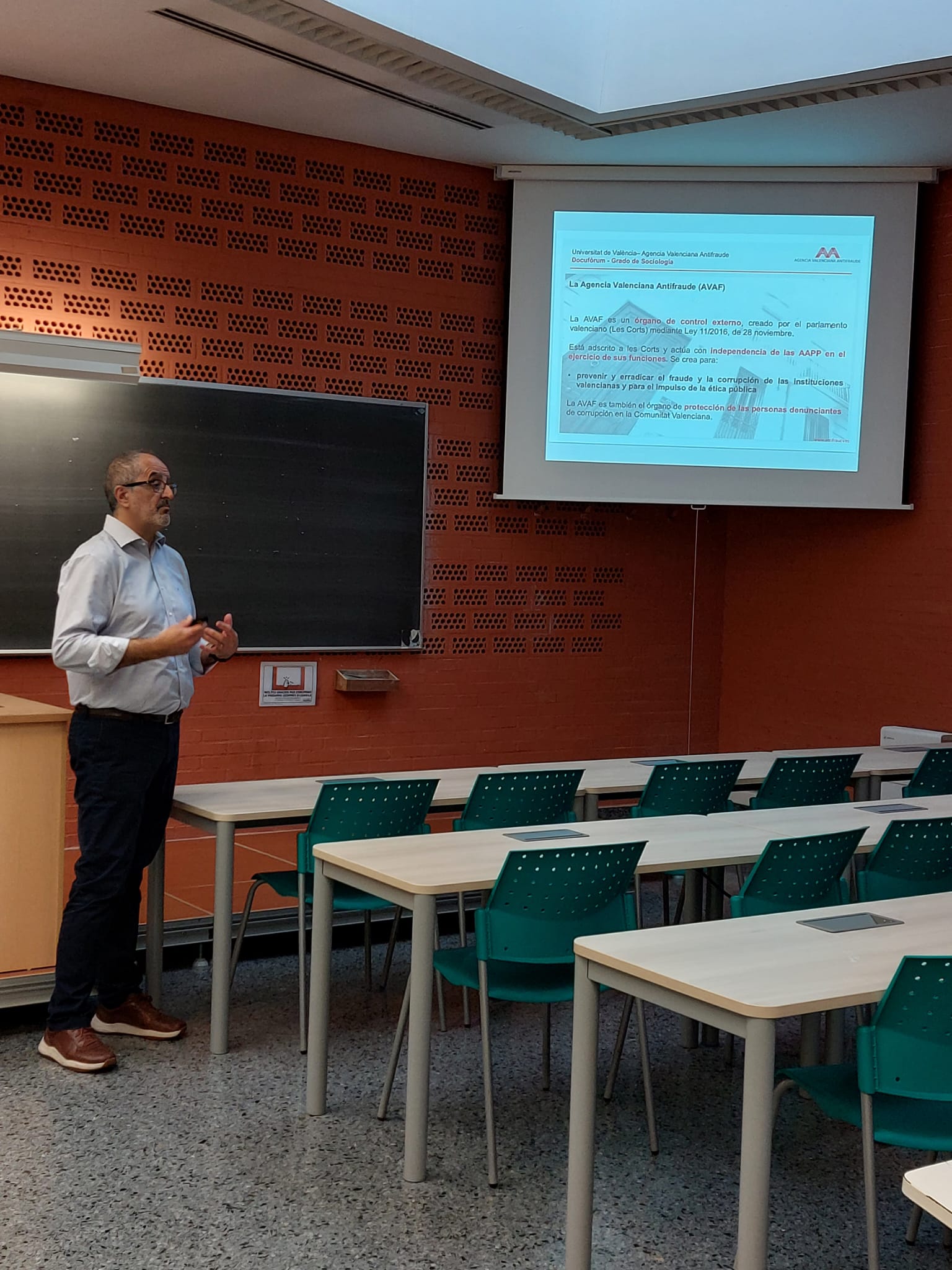 The AVAF has carried out the last university docufòrum of the semester, throughout the 2021-2022 academic year 25 AVAF docufòrums have been carried out, 20 in universities throughout the Valencian Community, and 5 in Baccalaureate and ESO centers. With these activities, the Valencian Anti-Fraud Agency (AVAF) maintains its proposal for public debates with future professionals through training actions that reinforce public ethics and the culture of prevention and fight against any conduct that encourages fraud and corruption.

Thus, on May 17, the last activity of the semester was carried out in the university classrooms, on this occasion with the students of the subject of Political Structure of Spain and the Valencian Community, of the second year of the Sociology Degree of the University of Valencia , thanks to the collaboration and participation of Professor Javier Cuenca Cervera.

After seeing the documentary “Corruption: Harmful Organism”, the students who star in the training experience ask questions and propose action, focused on the origin and causes of corruption, its effect and costs, the perception of corruption in our society and with respect to other countries around us, what to do in cases of corruption. Questions that were answered by Anselm Bodoque, head of the AVAF Training Service.

In the session held with the students, they also watched the documentary “Conflicts of interest and public integrity“, made with the TAU service of the University of Valencia, and a debate was established on it.

The activity and debate with the students allows them to reflect on ethical limits and micro-corruption and fraud, which every professional encounters throughout their lives, as well as possible conflicts of interest. On this occasion, in addition, the students showed a special interest in reporting and protecting whistleblowers, as well as in legislation and public policies to fight corruption.

The discussion also served to reinforce the need for public ethics and integrity, as well as for prevention and civic education, and to present the rest of the functions of the Valencian Anti-Fraud Agency.

This activity has been organized in collaboration with the University of Valencia, which we thank for its interest and willingness to help create a culture of public integrity and rejection of fraud and corruption. 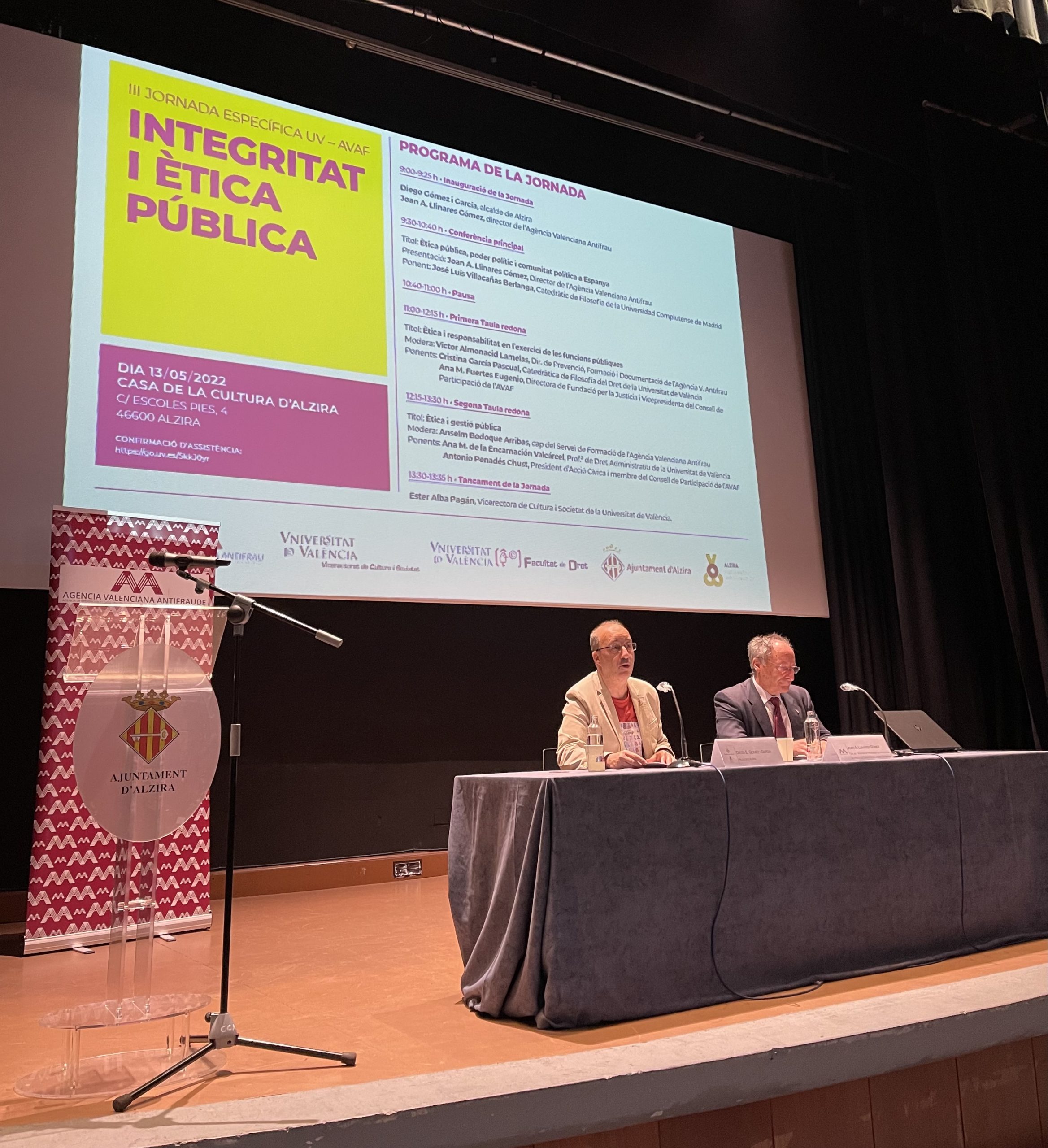 The Alzira House of Culture hosted the 3rd UV-AVAF Specific Conference, under the theme of “Public Integrity and Ethics”. The conference was held within the framework of the collaboration agreement signed between the Vice-rectorate for Territorial Projection and Society and today assumed by the Vice-rectorate for Culture and Society of the University of Valencia, with the collaboration of the Faculty of Law and the Alzira City Council.

It was opened by the mayor of Alzira, Diego Gómez García, and the director of the Valencian Anti-Fraud Agency, Joan Llinares, who thanked the institutional collaboration of both the Alzira town council and the University of Valencia, which from prevention have made possible programs such as the of this day. He also thanked the availability and participation of Professor Villacañas and the rest of the speakers.

The main conference on “Corruption: a philosophical approach” was given by the Professor of Philosophy at the Complutense University of Madrid, José Luis Villacañas Berlanga, accompanied at the table by Joan Llinares, director of the AVAF. Professor Villacañas started from philosophy to understand corruption, the fight against fraud and the control of actors endowed with power, and from this understanding generate common energies capable of repairing the world of shared life.

Corruption, far from being an opportunistic and circumstantial element in human action, can become systemic. It is precisely its expansive, invasive, totalizing and systemic aspect that must be explained in its essential elements.

Professor Villacañas explained what he calls the republican principle as the domain of the law, as an organizational principle intended to break the continuity of the holders of power in societies that make corruption normal, not recognizing autonomy and difference of the specific spaces of social life such as economic and political.

He concluded his presentation indicating that the indispensable condition to win the battle against corruption is the community of free men publicly linked to permanent institutions that do not allow themselves to be dominated, who fight for a way of living with dignity and cleanliness.

We invite you to listen to the conference at this link, as well as a short interview that was conducted on the same day.

In the first round table on ethics and responsibility in the exercise of public functions, the moderator was Víctor Almonacid, director of Prevention, Training and Documentation of the Valencian Anti-Fraud Agency. The Professor of Philosophy of Law at the University of Valencia, Cristina García Pascual, began her speech by raising the need for ethical behavior and responsibility, following Hans Jonas in the principle of responsibility. He went on to point out four forms of non-compliance with good public service to illustrate the complexity of the issue and the need to promote appropriate strategies from the institutions to minimize irresponsible actions.

For her part, the director of the Foundation for Justice and vice-president of the Agency’s Participation Council, Ana María Fuertes Eugenio, based her speech on different studies on corruption, such as the one carried out by the IVIE, as well as other projects such as the Pact against Corruption and its evaluation, to show how organized civil society initiatives are taken to control and monitor political commitments in order to promote citizen trust in institutions.

The second table, moderated by Anselm Bodoque, head of the Agency’s Training Service, on ethics and public management, included the participation of Ana M. de la Encarnación Valcárcel, professor of Administrative Law at the University of Valencia, and Antonio Penadés Chust, President of Civic Action against Corruption and member of the Agency’s Participation Council.

Professor Ana M. de la Encarnación focused her presentation on ethics in public management, starting from some nonsense that can occur in practice, questioning ethics in the processes of access to the public function, performance ethics, as well as such as the acceptance of gifts. In the reflection, he relied on the code of conduct for public employees integrated in some articles of the EBEP.

For his part, Antonio Penadés emphasized the concept of general interest, referring to those actions that, being legal, do not respond to the general interest. And remembering the importance of institutions for citizenship. On the other hand, he pointed out the difficulty of support judges in large cases with very extensive summaries, to insist on the need for specialized courts.

For his part, Joan Llinares thanked the necessary institutional collaboration to make possible conferences such as the one held in Alzira and raise awareness, from an academic discourse, of the necessary fight against corruption.