Formulas for a more integrated administration. The Valencian Anti-Fraud Agency at NovaGob 21.

Joan Llinares, director of the Valencian Anti-Fraud Agency, has participated in the round table, ” Formulas for a more open and comprehensive administration” at the Ibero-American Congress of Public Innovation NovaGob 2021.

The table focused on the best use of Next Generation funds. From the perspective of open government and public ethics, the director of AVAF has highlighted that the management and implementation of the NGEU Funds must be transparent and linked to the direct needs of citizens, avoiding the waste of public resources.

Similarly, Joan Llinares highlighted the need to integrate the anti-fraud cycle in all dimensions of public management and, especially, in the management of Next Generation funds. The Anti-Fraud Cycle focuses on the prevention, detection, correction and prosecution of corruption.

In this sense, the head of the Valencian Anti-Fraud Agency has highlighted the importance of prevention and training in integrity and public ethics for the achievement of a more comprehensive public administration.

Furthermore, the director of the AVAF has stressed that the training of personnel at the service of public administrations is essential for the construction of more comprehensive institutions. The director explained that the Agency’s training task aims to generate learning experiences and explore new formats to reflect together with public employees and citizens.

Finally, Joan Llinares affirmed that the strength of the institutions is essential. Control systems are discredited and this is the ecosystem in which corruption is most at home. Degrading institutions is the goal of corruption. Recovering and maintaining the trust of citizens is essential to combat it and this is achieved by feeling faithful to the principles of integrity, effectiveness and efficiency in the daily work of all public administrations. 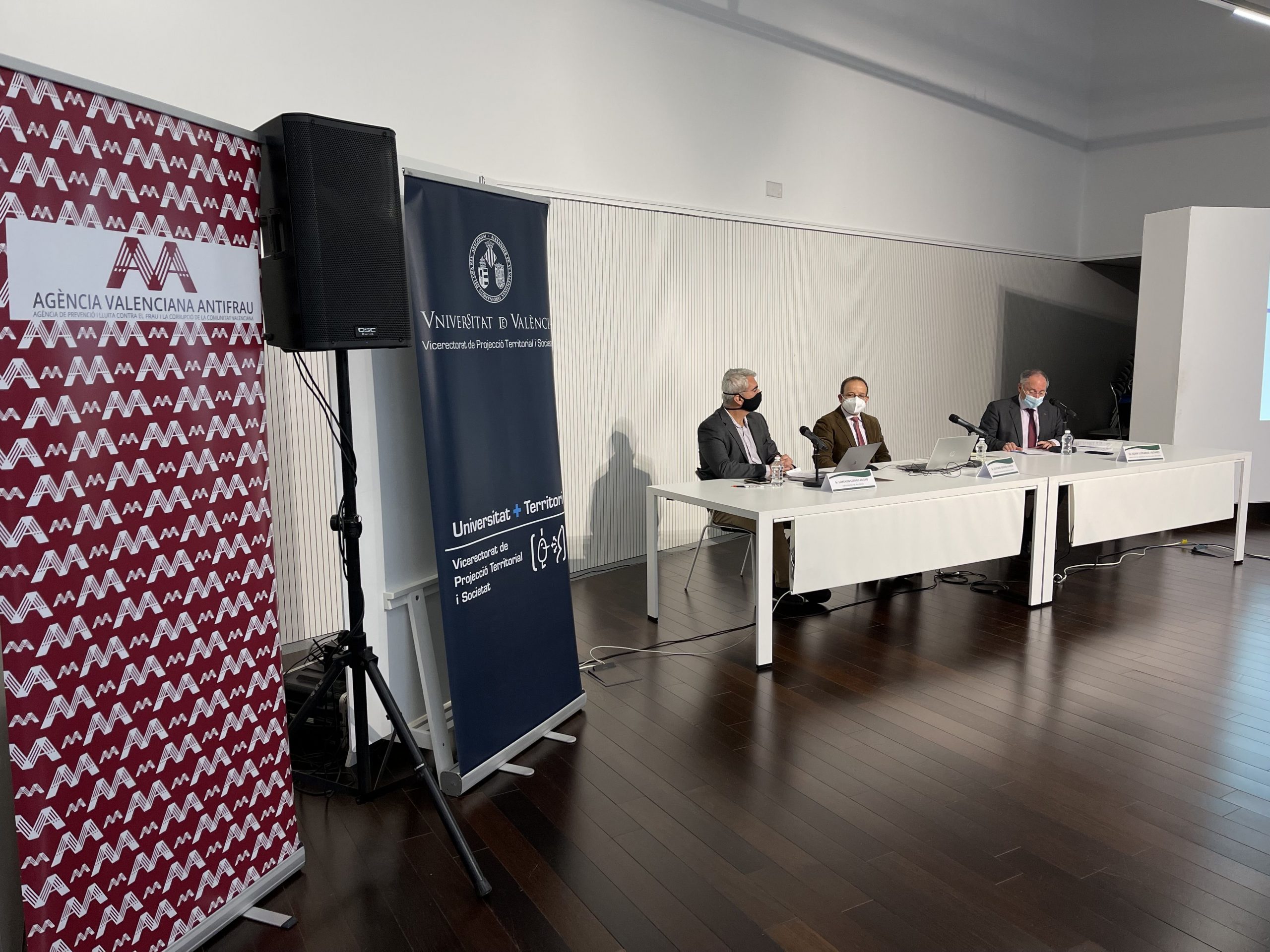 “Protection of whistleblowers” gathered in the Old Torrent Market and via streaming around 100 people, including public employees and employees, the university community and citizens interested in the debate on the implications of the obligation to transpose the European Directive 2019 / 1937 on the protection of persons who report violations of Union law, also known as Whistleblowers.

At the first round table on the protection of whistleblowers and the complaints box in Directive 2019/1937, the moderator was Joan Llinares, director of the Valencian Anti-Fraud Agency. The professor of Constitutional Law at the University of Valencia, Lorenzo Cotino, focused his presentation on the anonymity of the complainants or whistleblowers. He made an interesting tour on the evolution of the term ‘anonymous complaint’ and its introduction or mention from different institutions: Public Prosecutor’s Office, General Agency for Data Protection, State Attorney General’s Office, Supreme Court … pointing out that the great leap is given by Law 11 / 2016 of the creation of the Agency for the Prevention and Fight against Fraud and Corruption of the Valencian Community by expressly acknowledging anonymity. On the other hand, he insisted that information can be transmitted to the administrations by means of the facts so that they are the ones who initiate the files they consider.

For his part, the Director of Analysis and Research of the Agency, Gustavo Segura, focused the presentation on the complaint channels to which the European directive binds and obliges. The EU Directive establishes the protection of individuals as a fundamental objective and it is understood that the highest level of protection is anonymity. The complaint, whether anonymous or not, is a source of information, and by itself does not initiate any procedure. Gustavo based part of the intervention on the experience of the complaints box that the Agency has in operation since mid-2018, and that as indicated by the Directive in its art. 12 is bi-directional and allows anonymity.

Teresa Clemente in her presentation made a tour of the regulations that guarantee protection since 2003, the United Nations Convention on Corruption, the Group of States against Corruption until the European Directive 2019/1937 approved unanimously by the European Council. He presented the network of regional or local anti-fraud offices and agencies in the Spanish territory, mentioning the institutional declaration that urges the competent institutions of the Spanish state to transpose the directive into their own legal system. For this, he used a tour of the different initiatives of political groups. As in the previous intervention of the Agency, part of the presentation was based on the experience of 4 years attending requests for protection of whistleblowers, with only 2 cases of protection contested. The AVAF currently has 26 people who have been granted protection status.

Professor Fabiola Meco, for her part, based the presentation on explaining how a pioneering law was forged and was three years ahead of the European Directive. He emphasized the context of the moment -social, political and normative- since it visualizes the importance of the objectives for a cause that has the general interest and the people at its center. Context in which the fight against fraud and corruption was understood as the axis of change, and it materialized in the Law creating the AVAF. He pointed out the meeting points and disagreements at the moment of gestation, as well as those essential points: independence of the Agency, adequate resources, protection of the complainant, sanctioning power. All this to conclude with the need for a Valencian system of public integrity: respect, collaboration and institutional loyalty.

The AVAF makes this GUIDE available to any entity or person included in its scope of action, which, as its name indicates, is intended to serve as a ROAD MAP with regard to the minimum contents of public integrity plans, having integrated into its general lines the requirements and guidelines related to Next Generation funds. At the same time, the guide intends to accompany them in the process of elaboration and implementation of said plans, putting at their disposal XXI FACILITATING ANNEXES of this commendable task that allows Valencian public entities to position themselves in favor of the culture of public integrity, with tolerance zero towards corruption, in this case, through the preparation, approval and implementation of its integrity plan in relation to all its practice areas, resulting in an improvement in the control (internal and external) of the public budgets of Valencian entities, and not only those coming from the financial budget of the European Union.

The guide incorporates as an annex and complement to the same the visual didactic manual “Conflicts of interest, in the key of public integrity”, approved by Resolution of the Director of the AVAF no. 808, of November 10, 2021.

You can consult it in the following link